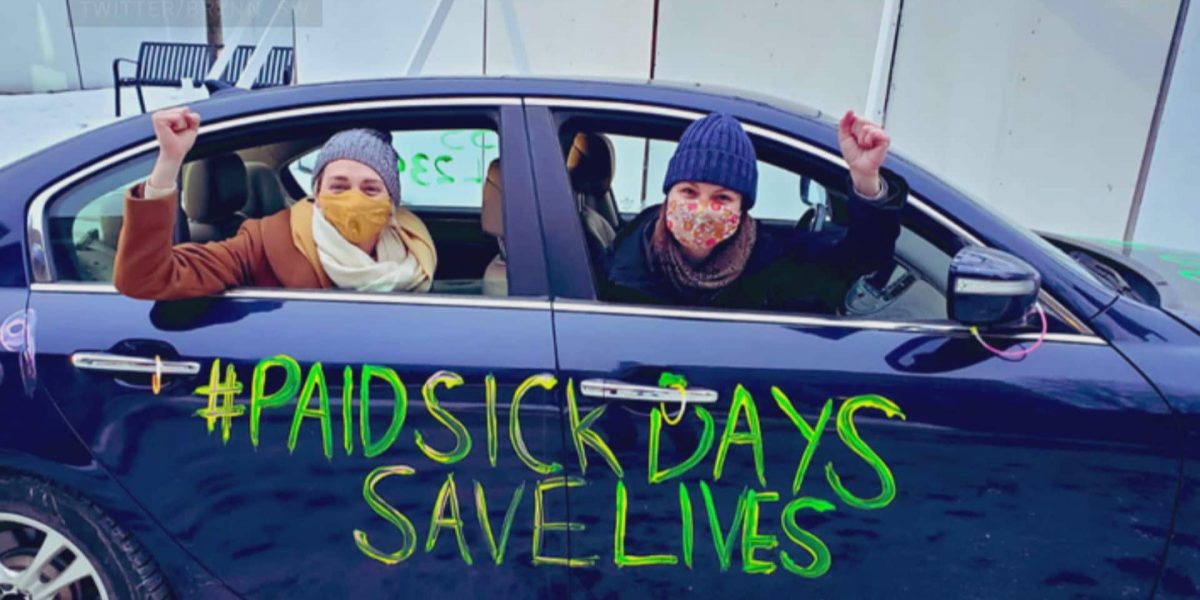 This week the Ontario legislature will debate Bill 247, Paid Personal Emergency Leave Now Act, 2021. This would amend the Employment Standards Act to provide 10 permanent, employer-paid sick days, which are crucial for mitigating the catastrophic third wave and improving public health beyond the pandemic.

Before the third wave, the Ford government voted down similar legislation, Bill 239. Since then more than 115,000 people across Ontario have been infected with COVID-19, more than 700 have died, and there are projections that the worst is yet to come. Ford has caused further shock and outrage by expanding police powers instead of paid sick days. This energy should be channeled into a mass call to pass Bill 247: here are 10 reasons to legislate 10 permanent, employer-paid sick days

We are in the midst of a preventable humanitarian crisis. It is nearly 6 months since Canada’s Chief Public Health Officer, Dr. Teresa Tam, declared that paid sick days are “essential for worker and community health.” This advice has been ignored, worsening two deadly waves of pandemic, and now the healthcare system is being pushed to the brink–with field hospitals opening up and the possibility of critically ill people being denied ICU beds due to lack of capacity. Ontario’s Health Minister Christine Elliott has promised that “every Ontarian who needs an ICU bed will get one,” but this does nothing to prevent COVID-19; it only promises more workers dying on ventilators, while burning out the already overstretched hospital workers. Many US jurisdictions are ahead of Canada in expanding paid sick days through the pandemic, and those states that gained access to paid sick days saw 400 fewer cases of COVID-19 per state, per day. It is not just a hashtag: #PaidSickDaysSaveLives

Ontario Labour Minister Monte McNaughton claimed last week that “there’s four weeks of paid sick days available to every single worker in the province of Ontario” in the form of the Canada Recovery Sickness Benefit (CRSB). This is a lie. CRSB is not fully paid and not guaranteed: the $450/week after taxes that it provides amounts to a a pay cut for more than 80% of workers, and workers have to apply, wait to see if they are accepted, and then wait for the funds. CRSB is not for any sickness: it is only available for COVID-19 and will end with the pandemic. CRSB is not available in days (like one day to get a vaccine, two days to get a COVID-19 test and wait for results, or two weeks for isolation): it is only available in weekly intervals, and only after missing half a week of work. And CRSB is not available for every worker: it excludes those who earned less than $5,000 the previous year, and excludes those without a SIN number like migrant workers.

CRSB isn’t broken and doesn’t need to be fixed, it is functioning exactly as designed: as a disincentive to workers to stop work, and as a public subsidy to employers who deny paid sick days. For those who qualify, CRSB it does provide a small amount of retroactive income support, but as a proactive public health measure, it is a total failure, and has failed those workers in greatest need. As economics professor Mikal Skuterud showed, unionized workers doubled their number of hours of sickness absenteeism during the pandemic; so workers with access to paid sick days were able to stay home when sick, preventing the spread of COVID-19. But for non-unionized workers who don’t have paid sick days, there has been no increase in sickness absenteeism despite having access to CRSB, which has contributed to the further spread of COVID-19. Presenteeism (going to work sick) was well known to have significant health and economic costs before COVID-19, and these are magnified during the pandemic.

A decade ago, a study of the H1N1 pandemic found that it had a disproportionate impact on racialized workers–because of inequities in housing, transportation and working conditions. As the American Journal of Public Health concluded, “work-related inability to engage in social distancing” explains the “unequal levels of severe disease and hospitalizations among racial/ethnic subgroups in the 2009 H1N1 pandemic. Therefore, resources such as sick leave–which would allow people to engage in social distancing–should be equitably distributed.” But a decade later, COVID-19 has produced the same disproportionate deaths among racialized communities because of the same structural conditions. As Public Health Ontario found after the first wave, the most diverse neighbourhoods had three times the rate of COVID-19 infections, four times the rate of hospitalization and ICU admissions, and double the mortality rate. Because of systemic racism, racialized workers are concentrated in low-wage essential jobs that deny essential protections, so paid sick days is both an issue of economic justice and racial justice. We need to end the racist denial of paid sick days, including for migrant workers.

As studies before the pandemic revealed, paid sick days are an issue of gender justice. Because of systemic sexism, women are disproportionately concentrated in low-wage jobs that deny paid sick days, and disproportionately use their own paid sick days to care for children. The pandemic has added another unequal burden. As a report early in the pandemic warned: “in the five lower-to-middle income professions where women are most likely to be employed–caring, clerical, catering, cashiering and cleaning–only one type of job (clerical work) could potentially be done from the home. The other four are by definition in-person jobs, and workers in three of these professions–caring (in healthcare, childcare and long-term care), catering (food preparation), and cleaning–will be on the frontlines of combatting the virus. The stress on the primary care and long-term care systems will be borne largely by the women who staff these frontlines.” This has been tragically confirmed by the deaths of frontline health workers, especially racialized women working as nurses, care aids or personal support workers. The pandemic has exposed an economy based on racialized and gendered precarious work, and legislating paid sick days would combine economic, racial and gender justice.

Paid sick days are also an issue of disability justice. First of all, workers with disabilities are in greater need of paid sick days but in concentrated in low-wage jobs that deny paid sick days. Secondly, as the catastrophe of LTC deaths showed, the denial of paid sick days for care workers fuels a pandemic that disproportionately impacts immunocompromised people and those with chronic health conditions. Ford’s response to this crisis has added another threat: rather than preventing COVID-19 with paid sick days, the government’s promise of endless ICU beds will come up against the reality of limited resources. This is raising the prospect of triaging critical care resources based on a calculated risk of which patients will benefit most–which could reinforce disability oppression. As David Lepofsky of the Accessibility for Ontarians with Disabilities Act Alliance explained, “the calculator dehumanizes it and it makes it falsely seem like it’s a mathematical calculation. It is not. People with disabilities are disproportionately exposed to getting COVID, and dying of COVID. It would be a cruel irony if they then faced the risk of being deprioritized in getting access to critical care.”

It was well known before COVID-19 that workers with access to paid sick days, and their children, have greater vaccination rates. The same is true during COVID-19, including for front-line workers in greatest need of vaccination. As a recent survey of 8,700 healthcare providers found, 64% were worried about losing wages in order to get the COVID-19 vaccine or recover from side effects, and 68% would be more likely to get the vaccine if their lost wages were covered. As Sharleen Stewart, president of SEIU Healthcare explained, “As the government plans to ramp up vaccine roll-out, it’s important that their plan eliminate all barriers to vaccination for frontline healthcare workers. That’s why we’re calling on Premier Ford’s government to provide financial support for those healthcare workers who lack paid sick leave and are anxious about missing work because of potential side effects from the vaccine.” Legislating permanent paid sick days would improve vaccination rates during COVID-19 and beyond.

The “lockdown” during the current third wave is as effective as during the first two waves: they work for those from affluent and predominantly white neighbourhoods who are able to work from home, and are more likely to have paid sick days and access to vaccination. But they fail those in greatest need of protection: low-wage essential workers from predominantly racialized neighbourhoods who are least likely to have paid sick days and least likely to have access to vaccination. Stay-at-home policies are an important public health tool if they promote safe physical distancing with financial security. But Ford has done the opposite: ignored the physical proximity of dangerous workplaces, denied the financial security of paid sick days, and undermined community safety with more police. This situation must be reversed: expand paid sick days, not police.

Contrary to the myths from the big business lobby, there is no evidence that employer-paid sick days harm the economy or small business. Presenteeism is far most costly than absenteeism, and there’s a strong business case for paid sick days, because they promote greater retention, faster returns to work, and a healthier workforce with better morale. That’s why the majority of small businesses have supported paid sick day legislation–from San Francisco to New York. But the 1% opposes paid sick days for a number of reasons: to increase the rate of exploitation (especially for those whose business model is based on racialized and gendered precarious work), and to discipline workers. These are the workplaces with the worst records for COVID-19 outbreaks: Scotlynn Group’s farm, Cargill’s meat packing, Loblaws’ grocery stores, Amazon’s factories, Extendicare’s long-term care homes. These are wealthy corporations who have fueled the pandemic by denying basic labour rights, and refusing to legislate paid sick days means refusing to hold these companies accountable. CRSB is no substitute for paid sick days, and relying on community collections simply perpetuates the CRSB’s problems of retroactive, inadequate, inaccessible and temporary pay.

If this pandemic has taught us anything it is that public health depends on decent work for all. But Ford has allowed a humanitarian crisis to develop by denying paid sick days–which undermines the basic public health advice to “stay home when sick”, undermines “stay-at-home” orders, and undermines vaccination. That he would rather see the death toll mount, and risk a political crisis for his own party, shows the degree to which he is ideologically committed to denying basic labour rights to low-wage workers, disproportionately women, disabled, racialized and migrant workers. But these same workers have been building a movement for decent work for years, and now Ford is virtually isolated in his opposition–even among Conservative voters. The way out of this crisis is to magnify this worker-led movement for employer-paid sick days, and impose the will of the majority on this government. Passing Bill 247 and legislating 10 employer-paid paid sick days would promote healthy workplaces and a healthier economy. And if workers can unite to win paid sick days for all, this would inspire further change for a healthier world.