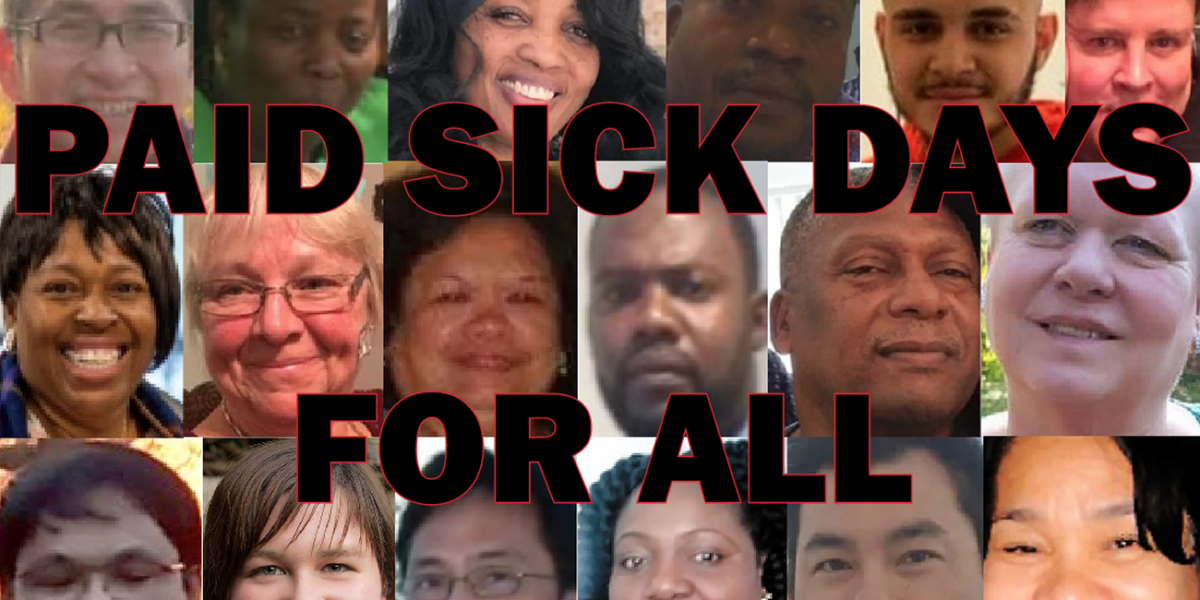 Yassin Dabeh was a 19-year old refugee from Syria who worked as a cleaner in a for-profit long-term care home in Ontario. His death from COVID-19, a year into the pandemic, shows the ongoing failure to protect frontline workers and to address the root causes of the crisis.

The Canadian Federation of Nurses Unions is compiling a tragic and growing list of health workers across Canada and Quebec who have died of COVID-19. It includes people from a wide variety of health fields, including the 62-year old North Vancouver dentist Denis Vincent and the 44-year old Montreal doctor Huy Hao Dao. But it’s also clear that the pandemic is disproportionately affecting health workers in low-wage and precarious jobs—PSWs like 31-year old Stéphanie Tessier in Montreal, 60-year old Sheila Yakovishin in Windsor, Agary Akaekpuchionwa and two other unnamed PSWs in Ottawa, and a PSW in Scarborough; 33-year old social worker Laurence Ménard in Montreal, 57-year old registered nurse Brian Beattie in London, and 62-year old health-care aid Rose Vandelannoite in Sherwood Park; plus two unnamed cleaners in Ontario, an unnamed home attendant in Manitoba, and an administrative assistant in Quebec.

“disparities in COVID-19 infection rates are shaped by the intersection of race, gender, immigration, labour, and public health. Health care workers account for 20 percent of infections, and in the hard-hit Greater Montreal area, up to 80 percent of the aides in long-term care facilities are racialized women, mostly Black and Maghrebi. Industries of care are feminized and undervalued despite being critical to preserving the health and safety of the population.”

Essential workers are disproportionately denied essential protection—from protective equipment like masks to protective policies like paid sick days. They are not just being killed by a virus but by profit-driven precarious work, which is gendered and racialized. As we mourn their loss, we need to fight for all workers living through the same conditions by taking the profit out of healthcare and providing paid sick days for all.

Leonard Rodriguez was a 61-year old PSW who was not provided with personal protective equipment (PPE) at work, and had to resort to buying his own masks at a dollar store. “There are so many PSWs like him who are not being protected,” his daughter said after he died of COVID-19 last May. “My dad’s dead, gone, and there are a lot of families who have lost their loved ones because they weren’t being protected.”

“the challenges that we’re facing right now is with PPE, because some days we have and some days we don’t have. And then there are days when we have one set of PPE for the entire day which becomes in itself a disadvantage because we’re finding more and more workers get infected because of the longstanding wearing of PPE…What I would like to see happen in the workforce is that, we’re challenged with overwork and understaff, so to provide more staffing which would also enhance safety measures. Because when we have the proper work team, then the safety measure would come in place…and we wouldn’t see this level of infection.”

These frontline workers did not lack PPE because of a lack of resources in LTC: Ambersley worked at Extendicare and Mandegarian worked at Sienna—two of the three largest and most profitable LTC agencies, along with Chartwell. As palliative care physician Amit Arya explained, “it is about prioritizing profit over people. That’s the whole principle when we’re running any sector like a business. What will happen is that any extra money that’s in the system will not be reinvested into the care of the people [or] the well-being and safety of the health workers.”

While the three biggest for-profit care homes have provided $1.5 billion in dividends to their shareholders over the last decade, they’ve been unwilling to provide their workers with PPE or paid sick days. As a consequence, precarious work has fuelled the pandemic, killing healthcare workers and LTC residents.

According to recent report by the Science Table COVID-19 Advisory for Ontario:

It also found that:

“many LTC home staff have part-time jobs without access to paid sick leave, meaning that staff may come to work sick and/or they may be forced to work other front-facing jobs that increase their risk of SARS-CoV-2 infection [the virus that causes COVID-19]. More immediate and long-term commitments to increasing the number of full-time jobs with fair pay and benefits including paid sick leave will help remedy the staffing crisis and can also help reduce transmission of SARS-CoV-2 into LTC homes.”

As professor and LTC advocate Vivian Stamatopoulos put it, “Not one individual that I can think of would ever suggest contributing to a police state in long-term care. It will not keep COVID out, it will not keep the residents safer. What we need to spend the money on is more skilled nurses and PSW.”

But rather than following the scientific recommendations, Ford and his allies have tried to undermine them by attacking epidemiologist David Fisman and LTC advocate Vivian Stamatopoulos.

The list of healthcare workers who have died of COVID-19 also shows how precarious work disproportionately exposes migrant and racialized workers to the pandemic—from Thông Nguyễn, a 48-year old patient attendant from Vietnam who died in Montreal, to Jean Claude Dianzenza Bahati, a 61-year old healthcare aide from the Congo who died in Winnipeg.

As Sharleen Steward, president of SEIU Healthcare said, “We have a care economy in Ontario that exploits working women of colour, who are intentionally abused by their employers, as well as their government…It’s time we boldly change the conditions of work and care in our nursing home system once and for all.” Ambersley, Roberts and Reid were all from Jamaica. Mandagarian was from the Philippines—as was Warlito Valdez, a 47-year old care home worker who died in BC; Joe Marie Corral, a 61-year old healthcare aid in Alberta; and Victoria Salvan, a 64-year old elder care worker in Montreal. As Salvan’s coworker explained, “If she had a mask, gloves and jacket, it could have saved her life. Since March, we don’t have no equipment, they don’t want to give us masks. They don’t want to give us jackets to go into the red zone to work with people who have COVID.”

Marina Thenors-Louis and Marcelin François, 45 year-old and 40 years-old respectively, were both from Haiti, both worked as PSWs in Montreal, and both died of COVID-19. François was one of 800 asylum seekers working as orderlies in LTC facilities in Quebec, asking for permanent residence.

These are workers from the same migrant communities who are displaced from their homelands by war, and by the same racialized communities who are targets of police. What this requires is not further military intervention and more policing, but taking the profit out of healthcare and replacing it with equity. Like “humanitarian interventions” overseas, military deployments at home don’t address the root cause of crises.

The military was already deployed to LTC months ago during the first wave, including to Sienna’s for-profit LTC after 40 staff were infected with COVID-19. They did nothing to address profit-driven precarious work. Nowhere in Chief Public Health Officer of Canada Teresa Tam’s report on COVID does she call for military intervention. Instead she identifies the roots of the LTC crisis as being “economic and employment insecurity, a lack of paid sick leave and the need to work multiple jobs to make ends meet” and she calls “full-time quality jobs with benefits such as paid sick leave.” But months later and during the second wave, LTC agencies continue to profit while their workers continue to be denied basic protections.

As Federal NDP leader Jagmeet Singh wrote in response to the death of Yassin Dabeh, “his death is a tragedy. Essential workers are at risk every day. Paid sick days, faster vaccine rollout and access to PPE are needed urgently — to save lives.” These lives are disproportionately migrant, racialized and gendered, and the fact they are put at risk every day shows the degree to which systemic racism, sexism and precarious work are intertwined and have been normalized—even towards front-line healthcare workers during a pandemic.

We need to defund institutions of war and violence and invest in community healthcare, and movements are leading the way to boldly change the conditions of work and care. The Migrant Rights Network is calling for Vaccines for All—demanding vaccines that are accessible, and free of charge or coercion, and that that does require a healthcare or personal information that could be shared with immigration enforcement or police. This would mean that healthcare workers like François Marcelin could be protected.

More than 1,000 health providers and advocates have signed a petition from Doctors for Justice in LTC—demanding better pay, staffing, and paid sick days for LTC workers, and an end to for-profit LTC. This would improve the conditions that Maureen Ambersley warned about months ago.

The Fight for $15 and Fairness and the Decent Work and Health Network are calling for 7 permanent employer-paid sick days for all workers, and an additional 14 for public health emergencies like COVID-19. Passing Bill 239 would enact the recommendations of the Science Table on COVID-19, the Chief Public Health Officer of Canada, and mayors across the province. After the first nurse died of COVID-19, Minister of Long-term Care Merrilee Fullerton said that “words cannot express my sincere appreciation for all our healthcare heroes working tirelessly every day to stop COVID-19, and to keep us all safe.” But faced with a rising and preventable death toll, healthcare workers need actions not words: recall the legislature and pass Bill 239.