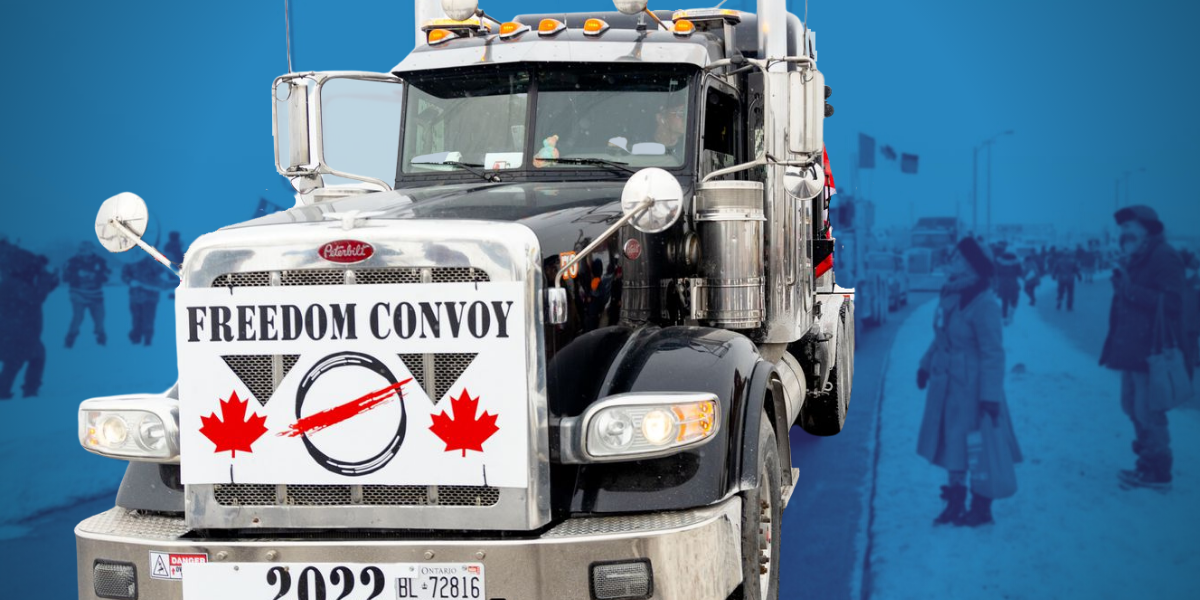 As it rumbled across the country in January, the “Truckers for Freedom” convoy captured the attention of the national media, galvanized the right-wing and shifted the political debate. On November 19, 2021 the federal Liberal government announced that certain essential service providers, including truckers, who had thus far been exempted from vaccination requirements, would have to be fully vaccinated to cross the border between the United States starting January 15, 2022.

Organized opposition to the mandates began in January in Alberta, but there’s a much larger context. After two years of the pandemic, there are growing anxieties about economic insecurity and state power which the convoy threatens to direct to rightwing conclusions. Responses that dismiss concerns about mandates and call for the police crackdown will only encourage this further. The best challenge to the convoy is to challenge the precarious working conditions that are the main threats to truckers and mobilize for decent work for all.

While vaccines are clearly safe and effective, there are legitimate concerns about the state using mandates to enforce vaccination as a panacea, rather than vaccine equity being achieved through community organizing and complementary to other policies. The ruling class used mandates to absolve themselves of taking more concrete measures to actually address public health and systemic inequities that were fuelling the pandemic. People needed legislated, adequate and permanent paid sick days, proper and sustained income supports, access to proper PPE, access to the vaccine, strong health and safety legislation in the workplace, proper ventilation at work and in our public services, access to proper testing and robust public services. Those that bore the greatest cost of this inaction were racialized members of our society.

Governments and the business lobby were determined to put profits before the needs of people. Vaccine mandates actually served as a convenient way to eschew their responsibility and further individualize the pandemic. Instead of providing proper PPE, safe workplaces and paid sick days, businesses could simply bring in employer mandates. Workers, rather than the bosses or government, became the focal point for safe workplaces.

The Liberals trumpeting vaccine mandates as a solution, with support from large parts of the left, muddied the water. Rather than discussing paid sick days (as had been the case in the Spring of 2021), the public discussion about ending the pandemic took place on the terrain of mandates. This top-down administrative approach pursued by employers and governments in order to keep profits going allowed them to side-step the question of  renewed government supports, expanded public services, proper health and safety, PPE and paid sick days.

The Canadian Workers Lockdown Benefit was brought in at the end of December to replace the CRB, but the amount on offer was significantly lower, $270 a week, than the $500 a week that was available via CERB and CRB. On top of that it was harder to access. Workers who were not fully vaccinated, who lost their job due to vaccine status, were excluded from the lockdown benefit or EI.

For most of the pandemic there have been super majorities that support lockdowns, vaccines and even mandates. While somewhere between 85% and 90% of truckers are fully vaccinated, more or less in line with the general population, those supporting mandates in the wider population were more split. Last summer roughly 72% of people polled supported vaccine passports, with even higher percentages of support for mandates for healthcare and airline workers.

Support for lockdown measures, as high as 70% in the summer, decreased to 63% in September and by December, when Omicron was spreading rapidly, only saw a slim majority of 55% support new public health measures.

Whereas a slim majority supported “restrictions” at the beginning of January, now a majority oppose them. This was a 15 point swing in favour of ending lockdowns and other restrictive measures. There is a strong regional variance in opposition to mandates and lockdowns, concentrated most highly in the Prairies and West. In response to the growing popularity of ending restrictions, Scott Moe, Saskatchewan’s right wing premier, said “government restrictions on your rights and freedoms — those will be ending, and ending very soon.” On Thursday the Chief Medical Officer of Health in Ontario, Dr. Kieran Moore, called for a reevaluation of the vaccine passport system.

The convoy and the far-right

The Freedom Convoy was well positioned to take advantage of the growing weariness around certain public health measures and vaccine mandates. Since the start of the pandemic there has been a small vocal minority organizing in opposition to vaccines and mandates. Steeped in conspiracy theories and full of people from the far-right, this minority on the anti-vaxx pole found their political home in the People’s Party of Canada, Maxime Bernier’s right wing split from the Conservative Party. The PPC’s stance on vaccine mandates and lockdowns helped distinguish it from other major parties. Consequently it was able to build on the anti-vaccine and anti-lockdown movement, capturing just under 5% of the vote. Their voting base went from 294,000 to 840,000 votes from 2019 to 2021. It is this milieu which lies at the heart of the Freedom Convoy.

The Freedom Convoy’s Facebook page was launched on January 14, which now has over 200,000 likes. Their Gofundme raised nearly $4 million its first week and has now collected over $10 million (Gofundme has recently suspended the campaign). At the centre of these efforts is a network of people on the far-right. Many of the key organizers were involved in the Canada Yellow Vest movement, which was heavily shaped by the far-right and the United We Roll pro-pipeline caravan in 2019. As the Canadian Anti-Hate Network noted, “The leadup to the 2022 “Freedom Convoy” is extremely similar to the leadup to United We Roll (UWR), and it shares many of the same organizers and participants. They’re even reusing UWR promotional materials.”

Tamara Lich and Benjamin Dichter, who started the Freedom Convoy 2022 fundraiser and administer the Freedom Convoy 2022 Facebook page, have ties to the far-right Maverick Party, which is the rebranded Wexit Party. Dichter openly espoused Islamophobia at the 2019 People’s Party of Canada convention. Other key voices and organizers in the movement like Patrick King and Jason LaFace have a long and sordid history with the far-right and white supremicist groups.

While elements of the far-right dominate the trucker convoy organizing, it would be wrong to dismiss the trucker convoy as some marginal phenomenon. The rally in Ottawa on January 29 was sizeable. This opened the door to the far-right. The rapid growth of support for the convoy is alarming. The large online support, plus the huge amounts of money raised, shows a real base.

It is clear the convoy is emboldening the right everywhere, including in the halls of power. Many Conservative MPs have been more than willing to hitch their political flag to it, and after enough prominent caucus members came out in support, former leader Erin O’Toole did so, too — but only hesitatingly. But it was too little too late for O’Toole whose support in his own caucus was slipping and he was voted out as leader of the Conservative Party. The convoy didn’t defeat O’Toole, despite some in the movement claiming as much, but they did boost the confidence of those in the Conservative Party who opposed O’Toole’s more centre of the road approach.

But we should be careful not to overstate its support. The actual convoy was nowhere near the 30,000 trucks claimed by organizers. The police reports and counts of the truckers coming through Ontario for instance numbered 17 full tractor trailers, 104 tractors, 424 cars and 6 RVs. While the action in Ottawa was large, it was hardly overwhelming in numbers, well below 10,000 people by most accounts. Neither Dichter nor Lich have ties to the trucking industry and most of the supporters and members of the Freedom Convoy are not, in fact, truckers — which is obvious to anyone who is paying attention to the industry.

Freedom from precarious work and the police

Truckers and the trucking industry are grappling with serious issues that far-eclipse vaccine mandates. The industry is rife with systemic misclassification, wage theft, and health and safety issues, while also facing a severe labour shortage. While much of the media narrative has focused on the archetype of disgruntled white middle aged men, the trucking industry has undergone significant changes. South Asian workers now make up close to 20% of truckers in the country. Groups like Naujawan Support Network are organizing to fight against rampant wage theft, exploitation of migrant workers by recruiters and bosses, and health and safety concerns. Workers in the industry need stronger labour rights and employment standards and greater enforcement of their rights.

There is no doubt that the Freedom Convoy benefits from white supremacy, and those pointing to hypocrisy about how the state handles Indigenous and Black-led protests are correct to do so. But those on the left who are looking to the police and state to crack down on the protests are misguided. As Desmond Cole and others have noted, supporting more repressive state actions and powers from a racist and colonial state is not the answer. Last year there was mass opposition against Doug Ford for empowering the police rather than supporting workers with paid sick days, but now some are calling for the police to enforce state mandates.

The Freedom Convoy has shifted the entire political debate to the right. They are pushing narratives that blame rising inflation on mandates, rather than on the impact of the virus itself and the practice of just in time supply chain management. As long as the convoy is allowed to dominate the public debate around mandates, it will be hard for the left to make headway. Ultimately there is a real struggle over the shape and direction of what the present moment should look like, to say nothing of the post-pandemic world. Between the ruling class’ top-down approach to addressing COVID-19 through mandates and individualizing narratives, and the rightwing orientation of denying the severity of the pandemic and attacking any collective solution, lies the left’s approach.

An active and campaigning left can build broad unity and action on issues that impact millions of workers. We can do this in a way that supports vaccine equity at home and abroad, stronger income supports, rights for migrant workers, paid sick days for all, ending misclassification and strong enforcement of workplace rights. It also means confronting systemic racism in the workplace, in our education system, and our immigration systems. It is about centering the needs of communities by advocating for defunding police and investing in robust public services that can support people through this crisis and beyond.

We have to reject winnowing the entire COVID debate down to punitive powers of mandates and lockdowns and focus on building broad campaigns that speak to issues faced by workers. To do otherwise is to leave the door open for the rightwing to pull the entire debate to the right and strengthen the hand of the bosses.