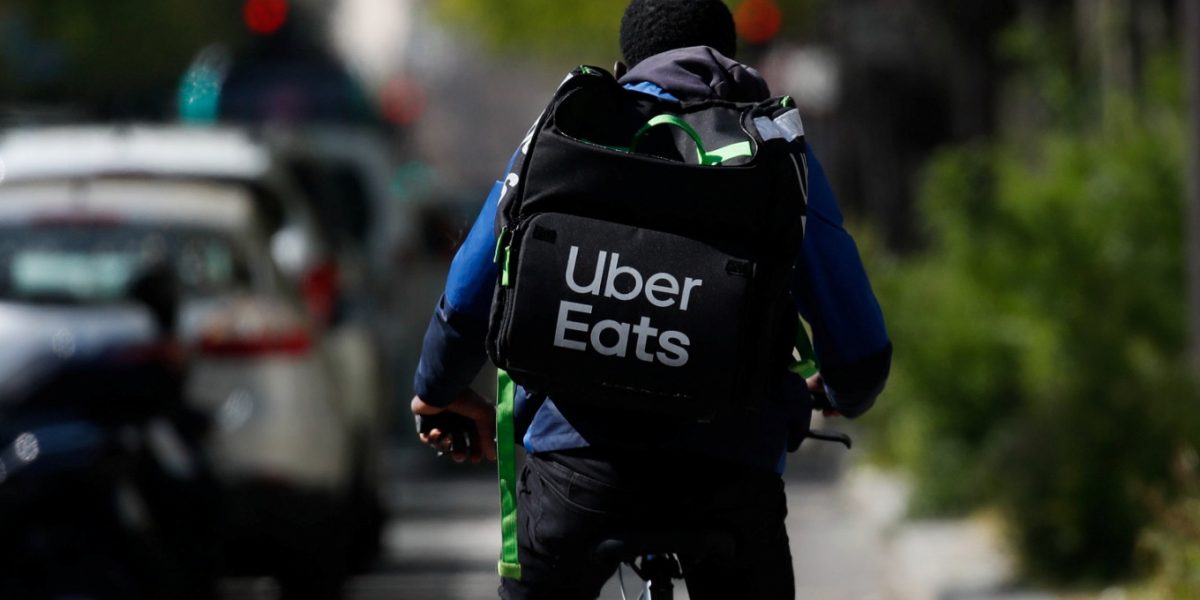 Jennifer Scott is a bike delivery person in Toronto and president of Gig Workers United, a union for app-based delivery workers. Spring Magazine’s Peter Hogarth sat down to talk with her about work, politics and organizing in Ontario.

What is work like for gig workers in Ontario?

Because of the pandemic, because of folks losing their job, we have the largest workforce that we’ve ever had. And due to the pandemic pay cuts (beginning in August and almost continuing in a downward trend), we are also working for the lowest amount of money that we have ever worked for in Ontario. So, deliveries that take half an hour to complete might pay $3 before tip.

Why are these app-based companies pushing these policies at this moment, and what’s the impact on the broader working class?

Uber came out in 2015 or so, on the heels of the first economic crisis in my lifetime. At a time when workers were really hurting, they came out with a plan that made workers really precarious and of course workers jumped on it because the barrier to entry was low. And every time we have seen employers in the gig economy make big moves it has come when people are really precarious.

So coming out of the pandemic, why is that perfect timing for Uber to petition provincial governments for a change to labour status for people in Canada? I think we see that the bigger purpose of gig economy companies is to roll back workers rights. And not just for gig workers. This classification will help any employer say, “these aren’t my workers.” This rollback is largely to decentralize the power of people who work in the service industry. In the US and Europe we are seeing the gig work template slipping into kitchen jobs and serving jobs. In Canada, we are seeing gig work jobs in healthcare, into virtual and remote teaching and a lot of tech jobs. So what we are really seeing in the bigger picture is rolling back the rights for the largest group of people, working class people who are struggling the most.

What is the Ontario Workforce Recovery Advisory Committee (OWRAC) and what does it mean for gig workers?

In January of 2021, Uber Canada began lobbying all the provincial governments for its proposal of “Flexible Work+”. Flex+ is a proposal to change the labour laws to create some new category of worker; basically, we would not have access to any of the good benefits of being an employee.

One of the big ones that Uber talked about is a self administered benefit package, which would basically be a bank account that Uber holds where an amount of money based on how much or often I work would be deposited on my behalf into an account and I could use that money to choose to pay for things like a pension or a sick day or going to the dentist or things like that. This is problematic because it means I lose out on CPP [Canadian Pension Plan] contributions or EI [employment insurance] contributions. It means that Uber is able to control the rules for how that money is calculated and administered.

So Uber is lobbying the provincial government and then we hear about OWRAC, which was announced in June. When I take a look at the third stated pillar of OWRAC [Supporting workers: How to ensure Ontario’s technology platform workers benefit from flexibility, control, and security?] that is basically Flex+.

The previous Liberal government just did the Changing Workplaces Review which had the exact same mandate but took two years and had meaningful input from workers and other labour organizations. By comparison, this seems like the Ford government wants to just rubber stamp a pre-ordained outcome.

It is pretty clear to me that’s what it is. The deadlines are short for submissions and there is no worker representation. It is only folks with white collar jobs and connections to the Conservative government. There are no labour advocates, no union reps, no experts on the gig economy on the OWRAC panel. It is deeply frightening. When I think of who should be making recommendations on labour law and work in Ontario, that group of people should be working class people with expertise in the gig economy.

They also use the word “modernize” for workers law. I personally think that is really manipulative. Labour advocates have been advocating for changes to the ESA [Employment Standards Act] and the Labour Code for a really long time, but they are advocating for changes that give more workers more protections and more rights. So this idea of “modernizing” the ESA makes me very uncomfortable.

‘Modernizing’ seems to mean misclassifying. What are the dangers of misclassification for gig workers?

All over the world when Gig Workers talk about the consequences of their work–the inconsistent pay, the pay that can be under minimum wage, what makes them precarious–it is all because of misclassification. Not having the correct classification makes it very difficult for working class people to organize. Without the ability to organize or access regulated paths to seek recourse for egregious things, there is no ability to hold the employer accountable.

In my opinion, misclassification is about removing the ability of workers to hold the app or the employer accountable. Whether we are talking about wages or unjust deactivations or health and safety issues, it all ends up being the same thing. A worker who is struggling to earn a good wage, who is doing something like clocking 50, 60 hours a week now has to figure out how to take this enormous company to court. It means there is no accountability. So what is put on workers is to organize really big and really hard and that is this immense burden on already struggling people to access very basic rights.

For instance, one problem we have is getting the correct amount of pay on a daily basis. Like when the order comes in and it says it is going to pay $6, you go do it and then later in the day you are looking through your app and it says you got paid $5 instead of $6. I can’t hold them accountable. I have similar questions about Uber’s Flex+. Will I be able to access that special flexible account 40 years from now? How can I hold them accountable, because I can’t today?

How has this played out in other jurisdictions?

Taking a look at Prop 22 in California we can see what the consequences are. For example, there was a grocery store in California that provided delivery services with unionized workers. A few days after Prop 22 passed, they fired all the workers and let them know that if they wanted to continue doing deliveries for the grocery store they could become independent contractors on Doordash’s platform and when an order for the grocery store came up they could accept that order.

Related to that, what are some places that are getting it right internationally, and what examples are there for us to follow?

In the UK, Amsterdam and South Korea, there have been some decent rulings in favour of delivery workers. My favourite though is the Rider Law in Spain, which finds that delivery workers are employees, they will receive salaries. It recognizes the presumption of employment status for drivers, that workers should be presumed employees–not the other way around. The onus or burden of proving that they aren’t employees is on the employer. The other interesting thing about the Rider Law in Spain is that it ensures workers the transparency regarding the algorithms in the app, which is very exciting. We can see that workers are winning and correct classification is the way forward for workers.

So, when we talk about what gig workers need, we can see all over the world governments and courts are recognizing that gig workers are misclassified and that correct classification is the way forward. The province of Ontario has the opportunity to be forward thinking, to look to the future, and join with what is happening all over the world. So any decision that is less than full workers’ rights is the Ontario government saying we are not progressive, we are not looking towards the future.

What is the Gig Workers Bill of Rights?

I spend a lot of time talking with gig workers. I can walk up to a group of gig workers I have never met and within 5 minutes we can have a conversation in which we can clearly outline in day-to-day language what employment rights we need. The Gig Workers Bill of Rights was written by gig workers in collaboration with lawyers from the OFL [Ontario Federation of Labour].

There is a lot of validation for gig workers knowing that people who have expertise in labour law or labour reform support and recognize that you deserve better. The Bill of Rights is a way for us to rally together and validate each other, that we all share this feeling that we need and deserve better.

The power of the Bill of Rights I think also comes from other people agreeing and supporting gig workers–as we use our voices, and as organizations that partner with us use their voices, to put pressure to ensure that Ontario makes decisions that match what is happening in the rest of the world. If we want to have an Ontario where the future is good, where workers are protected, then that is a future where we recognize what gig workers are saying they need. The Bill of Rights is an opportunity to support essential workers in a pandemic fighting for very basic rights. This is something that people in Ontario can do to support us.

The Ontario Superior Court is going to be hearing a class action suit against Uber over misclassification, what does that mean for gig workers in the province?

The class action is super exciting. I feel very proud of the workers who are working on it. I feel so much anticipation of what will come. We are seeing that even in Ontario, the writing is on the wall. Gig workers have identified multiple unions: GWU who are part of CUPW, and Uber Drivers which is part of UFCW, and the decision that Foodsters United workers were dependent contractors. We see that there are people in power in Ontario who are listening. So, the question remains: will the Ford government listen? Will they step up for workers? Or will we have to keep fighting?

A win for gig workers would be a win for the rest of the working class as well. How do we win and stop the slow slide towards the gig-ification of other jobs?

I think that working class people win when we have clear and defined access to forms of accountability. Whatever the things we are experiencing at work that are making our life harder–be that low wages, unsafe working conditions, discriminatory or abusive treatment– whatever those things are, having a path to seek justice for those things and not having to do it alone. For the gig workers who want to unionize, we need to be able to negotiate on pay, pay is so low, and we need to be part of the working class people who have the right to a minimum base pay. Doing deliveries in the pandemic for $8 an hour is unacceptable. So having that assurance through the correct classification, having full access to do something about things you experience at work that are not good, is a power working class people need and should all have immediately after taking a job.