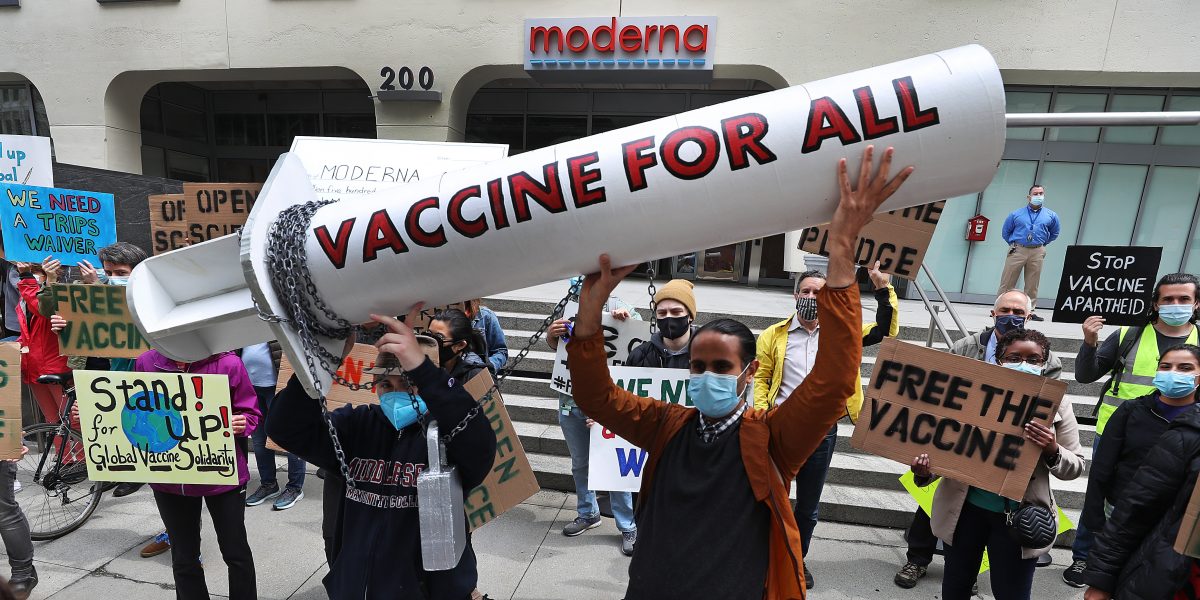 Recently, an international outcry has arisen demanding  major pharmaceutical companies to waive patents on their COVID-19 vaccines. As wealthier nations stockpile more vaccines than they need, supplies will likely remain scarce in over 85 poorer countries until 2023 and people will continue to die. Journalists, the World Health Organization, and even the Biden administration are calling on Big Pharma to relinquish intellectual property rights on vaccines. Yet pharmaceutical companies like Pfizer and Moderna are not solely responsible for vaccine inequalities. International trade regulations also play a major role in upholding Big Pharma’s monopoly, restricting vaccine access, and stifling economic sovereignty in poorer countries.

In October of 2020, India and South Africa jointly submitted a petition to the World Trade Organization (WTO) asking to temporarily suspend parts of the Agreement on Trade-Related Aspects of Intellectual Property Rights (TRIPS). As it is, the TRIPS Agreement allows companies to hold 20 year patents on intellectual property, including vaccines. If these laws were relaxed, countries facing severe vaccine shortages could produce their own vaccines and other medical supplies without relying on Big Pharma. Although more than 100 countries and various health and civil organizations have supported this petition, the WTO has blocked the proposed changes.

Meanwhile, pharmaceutical companies claim more vaccines cannot be produced due to lack of facilities, but have declined to work with qualified manufacturers in Africa, Asia, and Latin America. Backed by the Trump administration, Pfizer and Moderna opposed the WHO’s proposal to increase vaccine production through a program called the COVID-19 Technology Access Pool, or C-TAP. Moreover, neither Pfizer nor Moderna has replied to vaccine makers in Bangladesh, Pakistan, Colombia, and Chile. Even as the pandemic rages, the WTO continues to treat the vaccine like any other patented product on the market, weaponizing international intellectual property rights at the expense of human lives.

Simultaneously, pharmaceutical companies are forcing countries in the Global South to take on enormous debts in return for limited vaccine access while reaping profits from their vaccines. In the first quarter of 2021, Pfizer posted $4.9 billion in earnings due in large part to the vaccine. Similarly, Moderna anticipates $18.4 billion in earnings this year. Outrage at these companies is well justified. In a capitalist economy, there is no profit without cost. In this case, the cost is millions of lives.

International trade regulations perpetuate these inequalities. As part of their petition to the WTO, India and South Africa argued that poorer countries face barriers when navigating the TRIPS Agreement. Indeed, this agreement forces the rest of the world to adapt European copyright practices and enforces them on all countries equally. Additionally, instead of regulating corporations, the TRIPS Agreement upholds existing monopoly rights, which makes it extremely difficult for countries to exercise economic sovereignty. For instance, Aspen, a South African vaccine manufacturer, was ordered by Johnson and Johnson to export 91% of the COVID-19 vaccines they produced.

The WTO’s refusal to accept India and South Africa’s petition is economic imperialism on a massive scale. The TRIPS council requires a consensus of the 164 member nations to accept the petition, which was rejected by richer nations, including the U.S and various EU countries. While it’s important to call out companies like Pfizer, Moderna, and AstraZeneca, these companies maintain their power in part because they’re supported by international trade organizations in which Western nations hold significant power. This imbalance of power demonstrates that colonialism has never disappeared, but rather shaped the regulations that govern the global economy.

Racist, exploitative practices that place profits over people’s lives form the foundation of international laws. If the WTO relaxed intellectual property rights and put pressure on companies to waive patents, millions more people could be vaccinated and the pandemic could be over much sooner. The unwillingness of wealthy nations to share vaccine patents provides yet another example of the failures of capitalism, commodifying lifesaving medical treatments for no reason other than profit.

Moreover, the outcome of a global pandemic should not be determined by imperialist trade regulations, and yet the WTO and the TRIPS Agreement seem to hold more power over vaccine access than major health organizations like the WHO or the  COVID-19 Vaccines Global Access (commonly known as COVAX).

Of course, the WTO and the TRIPS Agreement are only one piece of the puzzle. But they do play a significant role in prolonging the pandemic. International agreements that maintain colonialism must be abolished. In the meantime, patents must be waived so the COVID-19 vaccine can become freely available to all.