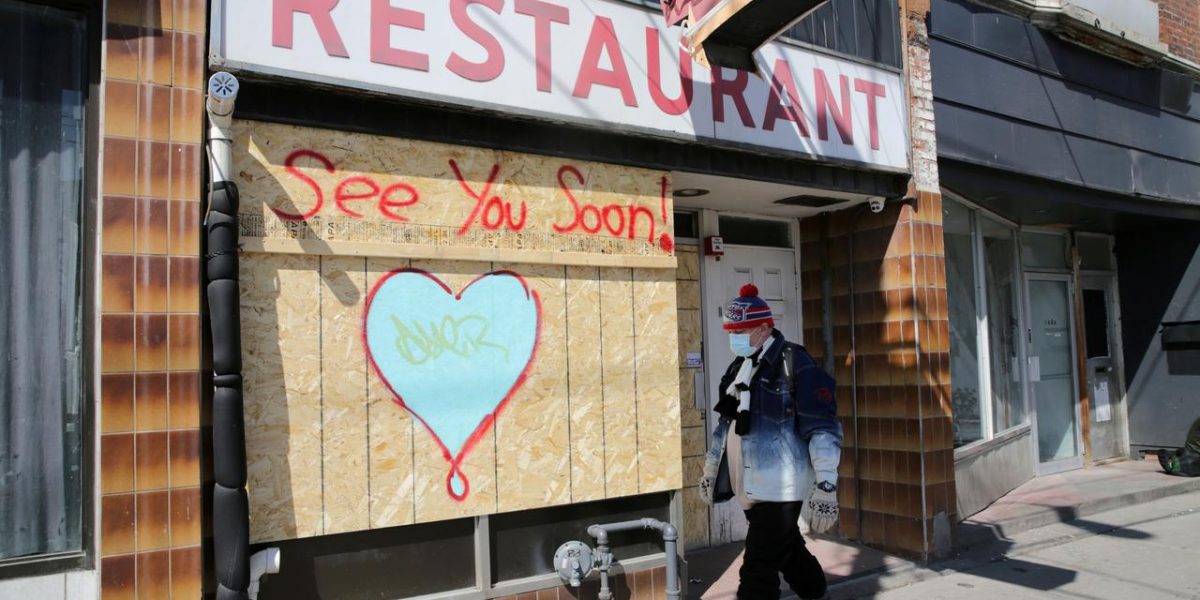 With some indications that COVID-19 numbers are peaking across Canada, the debate is shifting from how to stop the pandemic to how to restart the economy. But these questions are being counterposed. While right-wing populist protests have dismissed the pandemic and called for the economy to be immediately reopened, the main response has been to closely monitor the pandemic as the economy is gradually reopened. But regardless of the timeline, simply returning to “normal” will bring back the same conditions that helped spread the pandemic in the first place. The question should not just be be when to open the economy but how and in whose interests? Instead of simply reviving a deadly economy based on precarious living and working conditions, we need to reorganize the economy to prioritize health.

Before COVID-19: open for sickness

While nobody could have predicted the emergence of the novel coronavirus, its disproportionate impact and distribution followed a predictable course. Not surprisingly, the region in northern Italy with the worst hospital cutbacks experienced the worst hospital crisis. It’s no coincidence that the US, which denies tens of millions of people healthcare and had a delayed response to basic testing, has been severely hit—especially  racialized workers who are concentrated in essential jobs but denied essential protections.

Despite decades of cuts to public healthcare, Canada’s hospitals have so far avoided overwhelming crises like in Italy and the US. But this is partly because half the COVID-19 deaths have been outside hospitals, in long-term care homes. This is not just for the biological reasons that residents in long-term care are older and have more pre-existing conditions that place them at increased risk of severe COVID-19, but also for social and economic reasons. As researcher Pat Armstrong explained, “If you’re in the business of making a profit…in nursing homes, the overwhelming majority of the cost is labour. And that’s where you are going to try and save money…Hiring more people part-time, more people casual, more people at the last minute when you need them—rather than staffing up with full-time workers that you have to pay benefits and provide things like sick leave for…And a significant proportion [of long-term care workers] in our country are people who are new to Canada, who have very few employment options.” In other words short-term profit, based on exploiting gendered and racialized precarious work, is deadly to long-term care.

This is exactly the sort of economy that governments have been encouraging. In the year before COVID-19, the Ford government imposed a number of policies that make pandemics worse—including cutting public health, freezing the minimum wage, cutting paid sick days, restricting personal emergency leave days, cutting long-term care workplace inspections, and imposing a wage cap to healthcare workers. As SEIU noted, “Last year our union called on the provincial government to force profitable corporations to do the right thing and invest more of their profits into better frontline care. Instead they imposed a cruel wage cap for many healthcare workers, including cleaners, personal support workers and nurses.”

The economy was open for COVID-19 because it was closed to decent work, especially for women, Indigenous, migrant and racialized people on the frontline of pandemic response—from agricultural workers, to grocers, to cleaners. It is no coincidence that the first Ontario healthcare workers to die of COVID-19 were a cleaner and a personal support worker. The same is true in the UK, where the majority of COVID-19 deaths among healthcare workers have been racialized nurses and healthcare support workers.

The responses to COVID-19 have been a mix of contradictory policies based on opening and closing parts of society and the economy. On the one hand there have been repressive policies that have worsened the pandemic: xenophobic border closures failed to stop the pandemic but further opened up anti-Chinese racism, increased policing of public spaces has done little to contain COVID-19 but has further spread anti-Black violence, and the prison system threatens to unleash outbreaks among incarcerated people who are disproportionately Indigenous and racialized.

But there have also been partial reforms that movements have been raising for years, and that are critical to a healthy society—from closing down evictions and deportations, to opening up access to healthcare, housing, decarceration and wage increases. Ford has been pushed to partially reverse some of his previous policies—temporarily opening up public health funds and workplace inspectors, temporarily opening up personal emergency leave days for workers affected by COVID-19—but he has maintained his lockdown on paid sick days. Many of those most opposed to a $15/hr minimum wage, from governments like Ford to companies like Loblaws or Amazon, have temporarily increased wages for some frontline workers.

But without acknowledging these contradictory interests, government policies to “support the economy” will benefit the 1% rather than the 99%. Without closing down rent, opening up funds through the Canada Emergency Response Benefit (CERB) provides relief to landlords rather than tenants. And rather than opening up Employment Insurance and an emergency fund for all workers, the Canada Emergency Wage Subsidy (CEWS) puts money into corporate profits rather than workers pockets—including opening up public funds to corporations without closing down $10 billion in tax havens.

Far from society being united in a “war on coronavirus”, the real battle is within society over whether the economy should prioritize health or profits.  Foodora workers, who are essential for food delivery, organized to open their jobs to unionization but now the company has closed down across Canada in retaliation. The Ontario Nurses Union had to go to court to force long-term care homes to open up personal protective equipment. While government bailouts to Suncor provided no demands that they retool to provide green jobs, autoworkers pushed GM to reopen a plant to produce medical masks. As Green Jobs Oshawa organizer explained, this is just the start: “If it’s under public ownership, this it can be the basis for expanding and becoming an important manufacturing centre that provides a security of supplies for future crises. That can’t happen if it’s left up to a corporation that’s always driven by maximizing their own profit.”

Even basic public health measures like physical distancing and staying home when sick has been a battle in workplaces. “I was told on April 12 by Alberta Health Services that I was positive and needed to quarantine another 14 days,” explained a worker at Cargill’s meat plant in Alberta. “Cargill called me [three days later] and asked if I could come back to work tomorrow.” Cargill workers, the majority of whom are from the Philippines and some of which are denied status through the Temporary Foreign Worker Program, are forced to work in conditions that their UCFW president described as “petri dishes of infection, where hundreds if not thousands of workers are working in close proximity.” Cargill has opened up the biggest COVID-19 outbreak in the country—with more than 400 workers sick—and has labour conditions similar to other large employers like Amazon, which has seen COVID-19 cases in its factories around the world. If these are conditions during a pandemic response, what will happen when the economy returns to “normal”?

From reopening to reorganizing

COVID-19 cases appear to be peaking. But as an epidemiologist explained, “It could be suggestive of a peak of some sort but you really need to see more of a downward trend in terms of the actual new cases per day before you make any definitive conclusion about whether or not we’re at the plateau. It’s a little bit of an artificial sense of comfort to see the number of daily new cases dropping. We still have a ton of cases. We are not out of the woods yet.”

Despite this, there have been small right-wing protests to immediately “open up the economy.” But their demands are not to open up borders, open up housing, open public healthcare or open up decent work for all. Instead they are based on right-wing conspiracy theories fuelled by Trump that dismiss COVID-19 and those who are disproportionately affected, and threaten to worsen the pandemic.

The dominant response recognizes the severity of the pandemic, the need to protect front-line workers and to open up the rest of the economy as public health expands. As a report from Harvard university notes, “40% of the US workforce is currently in essential services. Unfortunately, however, this essential workforce has not been equipped with the resources needed for pandemic resilience…This highlights the importance of focusing our aspirations not on ‘opening’ the economy but on mobilizing for a pandemic-resilient economy. This entails achieving pandemic resilience for the portion of the economy that is already open, and then phasing in additional sectors of the economy in sync with our capacity to provide pandemic resilience to each sector.”

Their outline for pandemic resilience calls for 100,000 jobs to help track any new infections as the economy is re-opened. This would be a major public health intervention but still a limited societal intervention. It sees the pandemic as a purely biological phenomenon and focuses exclusively on testing, rather than transforming the living and working conditions that place people at risk of infection in the first place. Despite calls for pandemic resilience, the report doesn’t even mention paid sick days despite their proven effectiveness.

Ford’s A Framework for Reopening our Province is much less ambitious in public health terms, while continuing to ignore the lessons of outbreaks. The report claims “the health and safety of workers is the government’s top concern” (ignoring its policies that preceded the pandemic) and then states that it “will provide guidelines to employers on how to open safely and protect their employees and customers.” But as the outbreaks from long-term care to Cargill illustrate, it was governments and employers that created the conditions for outbreaks, and it is workers who have had to fight to protect themselves and others. The report also promises to “partner with businesses and other sectors to lead Ontario’s economic recovery. The focus will be on creating jobs.” But we’ve heard that rhetoric before, which was used to justify freezing the minimum wage and cutting paid sick days and workplace inspections.

There’s a danger that the transition from stopping COVID-19 to restarting the economy will keep the worst aspects of pandemic response open while closing down the best gains. Repression could continue—from police gaining access to medical records to track COVID-19 patients, to proposals for “immunity passports” which like regular passports will restrict the movement of people but not microbes. The Fraser Institute is pushing to open up the economy to more private medicine rather than public healthcare expansion to deal with the growing backlog of elective surgeries, despite the catastrophe of private medicine in dealing with COVID-19 in the US. Meanwhile gains—like temporary wage increases, temporary shelter, temporary halts to evictions or deportations—could be shut down. If this is allowed to happen, it could lead to a second peak of COVID-19 while paving the way for future pandemics.

Both stopping a pandemic and restarting an economy safely depend on building a healthy society. COVID-19 has opened up basic questions on how society organizes food, shelter, work and health, and what fundamental changes are needed. Rather than reopening an economy that condemns so many to unnecessary suffering, we need to reorganize one based on health. As Arundhati Roy concluded, “Historically, pandemics have forced humans to break with the past and imagine their world anew. This one is no different. It is a portal, a gateway between one world and the next.”