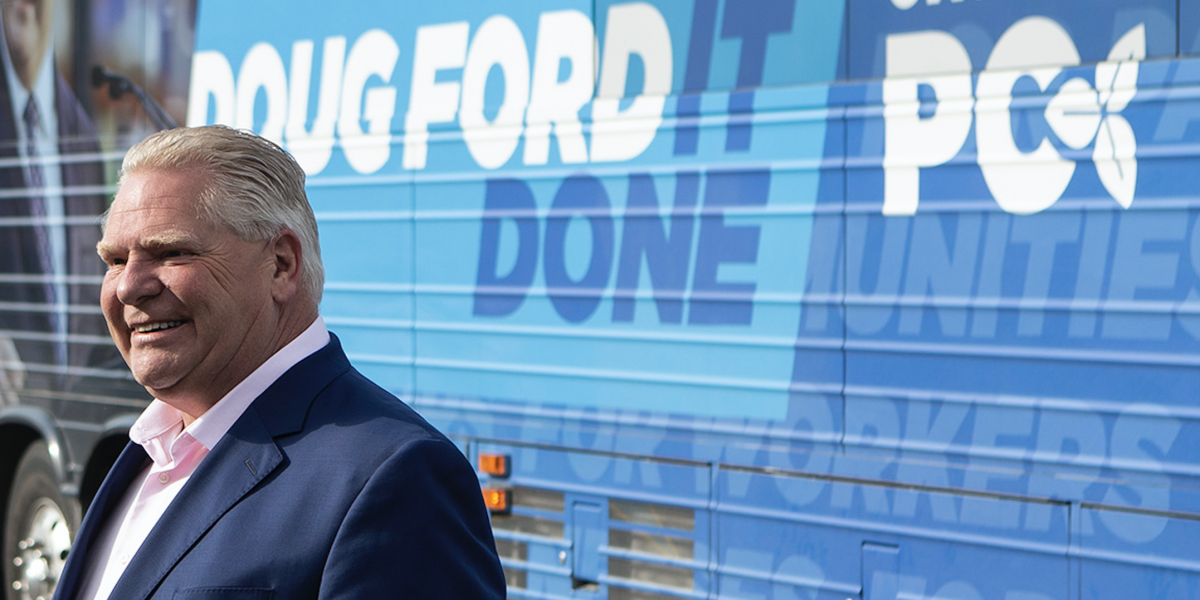 After six waves and more than two years of COVID-19, the Ontario election on June 2 should be a referendum on Premier Doug Ford’s pandemic response. Based on his record a vote for Ford is a vote for COVID, but the Liberals are no alternative.

Ford was elected in 2018 on a promise of being “Premier for the People”, listening to workers and ending hallway medicine. As he promised in the lead up to the 2018 election, “To all our great front-line health-care workers…help is on its way, but more importantly, we are going to start listening.”

But after being elected Ford passed Bill 47 which froze the minimum wage, cut paid sick days and reversed pay equity legislation. Then he passed Bill 124 to suppress wages for public sector workers—including front-line health-care workers. Then he cut public health spending. As a health worker said in September 2019, “there could not be a worse time in the history of the province of Ontario to be cutting funds to Toronto Public Health.” Three months later COVID-19 emerged.

While nobody could have predicted the pandemic, the impact of Ford’s policies on the pandemic were entirely predictable. Frontline workers are disproportionately denied decent wages, paid sick days and pay equity—and this disproportionately affects women, migrant and racialized workers. These are the workers targeted by Ford’s policies pre-pandemic, and these policies fuelled COVID outbreaks from farms to factories and long-term care.

Ford has had six waves and more than two years to reverse course, but has stubbornly refused to listen to front-line workers—unless under tremendous pressure or out of political calculation. A mass outcry for paid sick days forced him to promise “the best paid sick days in North America”, yet he only provided three temporary days that expire after the election. The decent work movement forced him to finally raise the minimum wage to $15, but he is using this to stall the demand for $20. The catastrophe in long-term care forced him to raise the wages for personal support workers. But he continues to oppose equal pay legislation, continues to propose privatization of long-term care, and continues to impose wage suppression through Bill 124—all of which affect personal support workers and other racialized women.

But Ford’s rhetoric is working and he is ahead in the polls. This is in part due to pandemic fatigue and the hope offered by these partial concessions. It is also because his incredibly vague promises, like his one-page platform to “get it done”, which hides his true policies. The other factor buoying Ford’s poll numbers is the record of the Liberals.

Ford won the last election by appealing to widespread revulsion at 15 years of Liberal rule. In their final year were the Liberals forced to raise the minimum wage, provide two paid sick days and legislate equal pay. But this was after years denying these policies and cutting healthcare.

Ford was able to campaign on ending hallway medicine because that was the crisis the Liberals had left. Ontario was the province with the lowest government spending on hospitals in the country when Ford took over: if funding were raised to the Canadian average, Ontario hospitals would have had an additional $4 billion. As the Ontario Hospital Association explained: “Ontario has fewer acute hospital beds per capita than an other province, or most countries tracked by the OECD. Even before COVID-19, many hospitals regularly operated above 100% occupancy during flu season. That’s where we found ourselves as we entered the pandemic.”

The Liberals have also been forced to campaign to the left—promising to increase public health spending, legislate 10 paid sick days and end for-profit long-term care. But the Liberals had 15 years to implement these policies while in power but chose not to. Despite their progressive rhetoric on some policies, nowhere in the Liberal platform is there any mention of reversing Bill 124. And rather than supporting a $20 minimum wage, the Liberals are proposing regional wages that would further entrench inequity.

Vote NDP and build the movements for a healthy pandemic recovery

The NDP have the best platform on improving healthcare—not only increasing healthcare spending and reversing Bill 124, but also instituting mental healthcare, dental care pharmacare. This is because the NDP are affiliated with the unions that represent many healthcare and other workers, as opposed to the Conservatives and Liberals who are funded by corporations profiting off the labour of workers.

A vote for the NDP will not automatically bring change—because the NDP in office is subject to the same market forces as other parties. But a vote for the NDP will give more confidence to workers whose movements are the key to change, regardless of who is in office. For example, the BC NDP were the first to legislate 5 permanent and employer-paid sick days during the pandemic, but this would never have happened without a movement demanding it—and this movement needs to continue because the BC NDP didn’t provide 10 days despite mass support. In Ontario the NDP promised 5 paid sick days last election (less than the movement was demanding before the pandemic) but now support the movement demand for 10 paid sick days.

As we’ve seen throughout the pandemic it is movements on the ground that have been key to pandemic response—from paid sick days to higher wages—and these movements have pushed all parties to respond. Ford has offered small concessions on wages and temporary paid sick days and campaigned on “working for workers,” while saying nothing about his Bill 124 wage suppression or his opposition to pay equity. The Liberals are promising to end for-profit longterm care and appealing to the demand for a higher minimum wage, while saying nothing about the inequity that regional wages will bring. And the NDP are presenting bold alternatives, without the limits of what the NDP delivers while in office.

In other words, no party is campaigning on holding down wages, cutting paid sick days, or privatizing healthcare. All parties are campaigning on supporting workers and improving healthcare. But if he wins, Ford will interpret his victory as vindication of his two years of disastrous pandemic response, not the past few months of election promises. As with the last election, a re-elected Conservative government will double down on the policies that fuelled COVID, and the Liberals will fail to provide an alternative.

So with a week to go before the election, we need to use the ballot box as a referendum on Ford’s disastrous pandemic response, the Liberal record that preceded him, and the alternatives the NDP are proposing. But regardless of who is elected, there is no mandate for continuing the same policies that paved the way for the pandemic, and the same policies that exacerbated it. Regardless who people vote for, in an election based on vague promises and hidden agendas, there will be allies in all communities—like the majority across all voting bases that support paid sick days.

The movements have shifted the political terrain during the pandemic and in the lead up to the election, and should feel confident to keep fighting for a healthy pandemic recovery after the election.