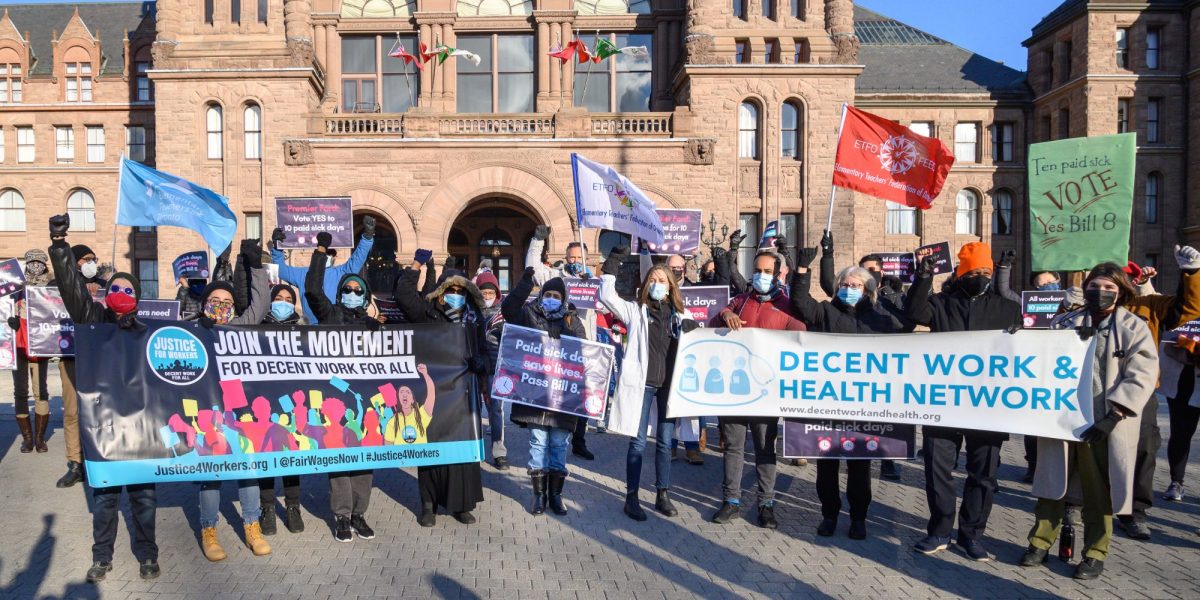 As we enter the 6th wave of COVID, the Ford government has lifted restrictions, watched infections rise and provided no protections for workers. This has especially affected low wage and precariously-employed workers–who are disproportionately women, migrant, racialized and disabled–and who are often the people who have been working on the frontlines throughout the entirety of the pandemic. On April 6th the Decent Work and Health Network released a groundbreaking report titled “Prescription for A Healthy Pandemic Recovery: Decent Work For All”, that highlighted how these lack of protections have affected people. This report has three major sections–“Gaps in Wages and Hours”, “Gaps In Paid Sick Days” and “Gaps in Workplace Protections”–and provides evidence-based recommendations on how to recover from the pandemic by centering health equity.

This report goes in depth highlighting how low wages, lack of paid sick days and lack of workplace protections have undermined public health throughout the pandemic. The report pulls from interviews with front line health providers and latest medical evidence. Reports like this one are essential to highlighting systemic issues and providing evidence to empower our fight for decent work. After reading this report I wanted to highlight the main lessons we can take away from it and how we can use these in our movement.

The first lesson is that precarious and low wage work has an effect on every aspect of someone’s life. Income is a key social determinant of physical and mental health: it affects access to food, safe shelter, and transportation. Lower income jobs lead to workers having an increased risk of physical and mental illness and reduced access to treatment.

Things like prescription drugs, mental health services, home care, physiotherapy are not publicly insured, which means people who have lower incomes will not be able to access many of these things or will have to pick and choose which ones they want to access. This especially affects women, racialized people, and people with disabilities who are concentrated in low-income jobs without equal pay.

The crisis in long-term care showed the impact of precarious work on public health, but that this can be rapidly reversed: after the BC government increased the wages and hours of LTC workers, mortality rates for LTC residents were far lower than in Ontario. So decent work is good for public health, and is an issue of racial, gender and disability justice.

The second lesson is that workers across Ontario are still relying on the temporary and inadequate paid sick days plan through the Worker Income Protection Benefit. After resisting paid sick days for the first year of the pandemic Doug Ford promised “the best paid sick days in North America” a year ago. But in this program workers are only entitled to 3 paid sick days and they only cover COVID-related illness. This means that workers have been having to rely on and stretch 3 sick days over 468 days.

As shown in this report, the lack of paid sick days have prevented many essential workers from staying home sick and this has spread COVID. We know that paid sick days save lives: as pointed out in this report, a 2017 study found workers with paid sick leave had up to a 22% lower risk of all-cause mortality. Building on demands from before the pandemic, workers and medical organizations throughout the pandemic have been demanding at least 10 employer paid sick days and an additional 14 in a pandemic.

There’s also evidence that these demands work: US states that expanded paid sick days saw 400 fewer cases of COVID per state, per day. The BC government became the first to legislate permanent and employer-paid sick days, but they only provide 5 to workers after 3 months (which excludes contract and seasonal workers); the federal government legislated 10 paid sick days but workers can only accrue them slowly over the course of the year, and the legislation has not even been enacted. This report makes it clear that effective paid sick days are both necessary and achievable, so we need to keep up the fight at both federal and provincial levels.

The third lesson that this report made clear is that lack of workplace protections prevented workers from advocating for their own health and safety. This especially affects migrant workers. This report echoes migrant workers in explaining that lack of permanent status was a key factor in their ability to protect themselves against COVID-19 and to assert their labor rights. They also deal with the threat of losing housing if they live in employer-provided housing, and deportation.

Most non-unionized workers fear speaking up about hazards in the workplace because they don’t have protection from unjust dismissal. The lack of just cause protection means employers can legally fire people without warning or reason, and leaves employees with little power to speak up against unsafe working conditions. In addition, gig workers who have sustained us through the pandemic have been misclassified as “independent contractors” to deny them basic labour rights, and the Ford government has entrenched misclassification with the recent Bill 88. This goes against public health evidence showing that unionized workplaces were able to defend their workplaces from COVID–through higher wages, paid sick days, better access to PPE, and job protection to raise safety concerns.

The report highlights that workers themselves are the best advocates for workplace health–from migrant workers calling for full immigration status, gig workers who have outlined a bill of rights, and unions who organize for health and safety.

Recommendations and continuing the Fight

The recommendations given by this report are to raise the minimum wage to $20 an hour; equal pay for equal work so that part-time, contract and temporary workers receive the same pay as their full-time coworkers; at least 10 permanent and employer-paid sick days, with government action to support enforcement; full and permanent immigration status for all; just cause protection, an end to misclassification and access to a union. All of these echo demands from workers and advocates, and provide evidence to strengthen these movements. The report has already been endorsed by a number of worker and health organizations–from the Ontario Nurses Association to Doctors for Justice in Long Term Care, and from Migrant Workers Alliance for Change to the Ontario Federation lf Labour.

Overall this report reinforces the importance of the fight for decent work, which is crucial for health and equity. Our work affects so many aspects of our lives and we deserve higher wages, adequate and permanent paid sick days, and just protections for all. Workers deserve all of these during COVID but also after COVID. These are basic workplace protections that are essential to keep workers safe. As epidemiologist Dr. David Fisman said, “The evidence in this report clearly shows that the government’s failure to improve working conditions has widened existing health inequities.” We need to keep fighting for workers rights, and we can use this report as a resource for the movement.

To read, endorse and share the report visit https://www.decentworkandhealth.org/endorse_report