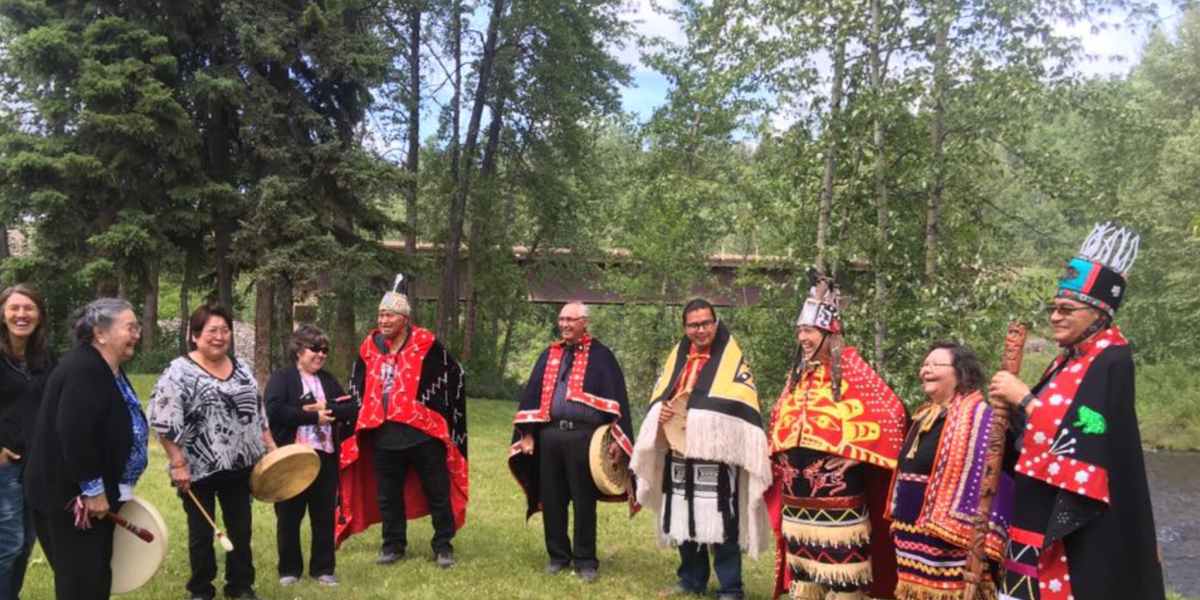 While many businesses were shutdown and workers laid off during the early months of the COVID-19 pandemic, companies like TC Energy have continued work on the unsustainable Coastal Gaslink (CGL) pipeline. The Office of the Wet’suwet’en is asking the B.C. Supreme Court to set aside B.C.’s decision to extend the environmental certificate for Coastal GasLink’s fracked gas pipeline in northern B.C. for another five years. Arguments and concerns over the pipeline were voice in court on Oct. 2, with the rest of the hearing resuming on Oct. 16. This is a key moment, and we must let both TC Energy and the Wet’suwet’en know the whole world is watching.

This review and extension is incredibly important as it represents the only opportunity for legally binding conditions to be added to Coastal GasLink’s certificate in order to address adverse effects not documented at the time of the original assessment. One such effect, not widely understood until the 2019 final report of the Inquiry of the Missing and Murdered Indigenous Women and Girls (MMIWG), is the risk of harm to Wet’suwet’en women and girls arising from the project, including an influx of temporary labour and the proximity of CGL’s work camps, also known as “man camps”. The MMIWG report found a direct link between work camps for resource projects and the increase of gender-based violence in Indigenous communities.

One of the section’s conclusions goes on to state “[T]he kind of change that will see better outcomes for Indigenous women, girls, and 2SLGBTQQIA people rests in a combination of systems-level changes and positive individual choices from those who now promote racist, sexist and misogynist structures and who keep them in place as a part of the existing status quo.” This shows the ways that colonialism and capitalism work in tandem to destroy both people and planet. When government and industry stop at nothing to push a pipeline through indigenous land, it’s not simply a way of expanding the oil and gas market, but also showing domination over those who have continued to show us that another way is possible.

The violence that goes hand-in-hand with the imperialist nature of the system is so ingrained in us through mass-media and social messaging that we are taught, not only is nature something to be dominated and exploited, but the health and well-being of those who care for it and defend it most are equally inconsequential. “Who bears the disproportionate burden of environmental destruction, water contamination and more pipelines? Indigenous peoples do. That is because genocide and ecocide go hand in hand,” said Mik’maq lawyer and activist, Dr. Pamela Palmater during a 2019 climate tour with David Suzuki. “This earth has suffered a great assault, in part because of massive human rights violations to its caretakers – Indigenous peoples. Similarly, Indigenous peoples have suffered a great genocide in part because of the violence committed against our lands, waters, and ecosystems on which we depend.”

This important legal challenge also highlights TC Energy’s record of persistent and ongoing non-compliance with legally binding project conditions since 2016, as evident from the official record of the Environmental Assessment Office (EAO). The Wet’suwet’en argue that EAO had a legislated obligation to consider CGL’s compliance record as a key factor in the decision on whether to extend the project’s environmental certificate.

“Far from being exceptions, these infractions – including instances of destroying Wet’suwet’en cultural heritage sites, interfering with Wet’suwet’en traplines, allowing sediment and contaminated soil from their operations to enter creeks, and others – show an established pattern of non-compliance on the part of CGL,” said Dinï’ze Hagwilneghl of the Laksilyu Clan. “EAO’s decision to extend the certificate despite these infractions can only promote an atmosphere of impunity within Coastal GasLink and the resource sector as a whole.”

Dinï’ze Woos of the Gitdumt’en Clan knows all too well the impact and violence that these camps and projects carry with them:

“With some of our own members, murdered and missing, the stakes couldn’t be higher for us. And yet the B.C. Environmental Assessment Office says the Wet’suwet’en are not a party and are owed only a minimal duty of fairness in their decision-making on Coastal GasLink. Meanwhile, BC government ministers pay lip service to UNDRIP in our ongoing negotiations, compounding the disrespect.”

The CGL project is planned to cut through the heart of Wet’suwet’en territories, with much of it paralleling the Highway of Tears, where a number of Indigenous women have been murdered or have disappeared. Three worker camps, expected to house 500-800 workers each, have been built or are being built in the yintah and in the vicinity of Wet’suwet’en communities. TC Energy has a current proposal to have a total of 14 work camps in the area. This is part of the ongoing lengths colonialism and capitalism will go to for profit and control.

“[E]xpropriation is a building block for settler colonial societies. It has a beginning, but it doesn’t have an end. There are just different forms of expropriation and different rounds of expropriation,” points out Lower Brule Sioux Tribe member and author of Our History is the Future, Nick Estes . “Whether it’s the construction of oil pipelines, or the mining of gold, or the taking of land, it’s a form of expropriation. And so how we are racialized and conscripted into the capitalist project is through dispossession.” Much like the DAPL and the TMX pipelines, we know they are illegal and cut through indigenous land, we know that they are another notch in the belt of climate change, and we know that we need to look to ourselves for solutions.

It is against the interest of capital to slow the rate of expansion, and it is against the interest of colonialism to let Indigenous peoples maintain the control and agency that is rightfully theirs. Capitalism maximizes rate of exploitation, of land and people, in order to maximize profits. Colonialism disposes and removes Indigenous people from their territory in order to exploit and extract profit. These two systems are one and the same, and neither can be reformed.

In order properly ensure Indigenous rights to sovereignty and end the exploitation of all workers and lands, we must work in solidarity against the system. In his book Tortured People: The Politics of Colonization, Metis historian and activist, Dr. Howard Adams wrote “The political culture of capitalism works hand in hand with the judicial system, politicians, bureaucracy and corporate leaders to harmonize racism, oppression and control. It is a carefully choreographed structure that maintains an apartheid authoritarian system over the Aboriginal population.”

In February of this year, when the RCMP raided the yintah in order to clear the way for TC Energy, Gitxsan land-defender Kolin Sutherland-Wilson and other Indigenous youth occupied the steps of the provincial legislature.

“Indigenous rights and environmental rights are intricately entwined. You can’t separate them. For Indigenous people, our cultures and languages and identities and everything is derived from the lands that our ancestors have lived on for centuries,” said Sutherland-Wilson. “We have been here for so long and maintaining these same territories through stories, oral histories, through victories and celebrations. When we stand up for Wet’suwet’en, we’re standing up for all of our futures. For all of our territories and their and our own well-being.”

It was with these kinds of words and actions that we saw a resurgence of activity among youth, among elders, and among a new generation of both social and environmental activists.

A massive wave of protest and solidarity washed over Turtle Island. From occupations and rail blockades, government and industry have now had to take note that we are not going anywhere. Intersectional links have been strengthened in the struggle against racist governments and their policies. For many, the call to defund and abolish the police go hand-in-hand with the call for decolonization and landback, and both call for raising the profile and following the leadership of Black and Indigenous activists.

Traditions on the left have too often tokenized or erased Black and Indigenous radicals from their theory and practice. We must fight to end these practices because it’s fundamental to ending capitalist and colonial oppression and exploitation. Landback, defund and decolonize have to be understood as more than slogans. They encapsulate the true nature of our socialist tradition.

The Red Nation’s latest pamphlet goes into great detail about the changes needed for a better world and call for a much needed “extreme clarification.”

“Though the language of socialism and communism is largely attributed to Marx, our ancestors were born free and practiced systems of caretaking that provided for the people without profit or accumulation in the capitalist sense. It is only because of capitalism that we are forced to employ revolutionary socialism as a vehicle to reclaim and name these caretaking systems.”

“Any socialist revolution that seeks to abolish racial capitalism in these lands must also abolish antiblackness wherever it rears its disgusting head. So, too, must any socialist revolution that seeks to abolish settler colonialism in these lands abolish anti-Indianism wherever it has taken root. We will never free life on this planet from the death grips of capitalism or colonialism if we do not abolish carcerality, nor will we ever wage a successful socialist revolution in these lands if we do not center the peoples and traditions who have resisted carcerality since capitalism and colonialism touched down: Black and Indigenous people… Land back happens through socialism and is not a form of exclusionary nationalism, but resurgence of Indigenous governance in solidarity with colonized and working class peoples. We make and steward the world together.”