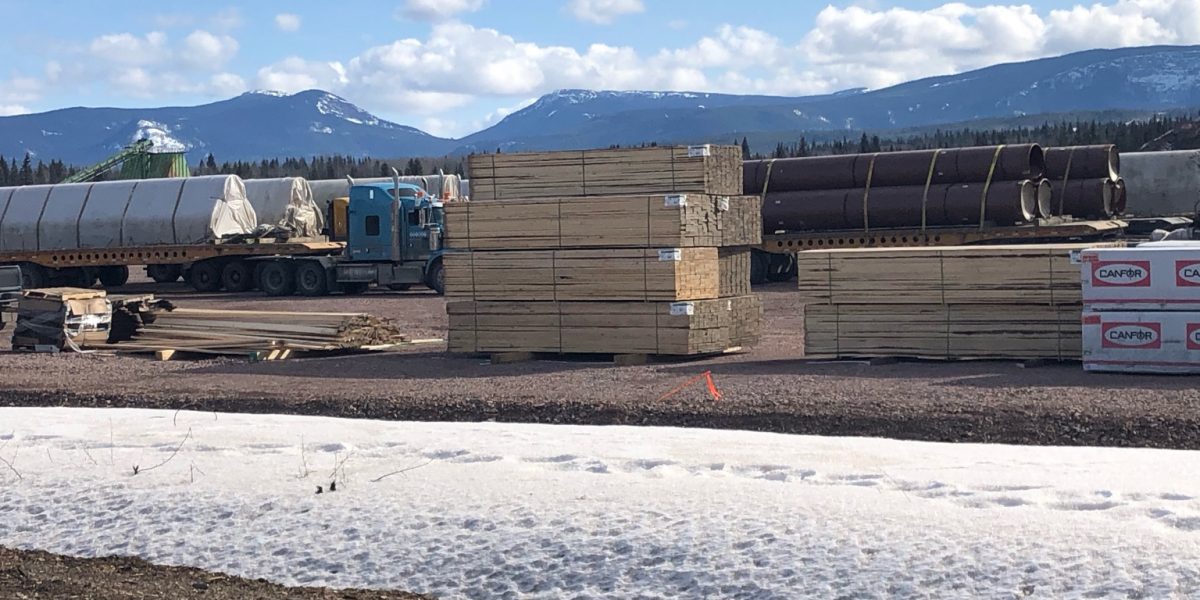 Despite BC having the some of the highest confirmed numbers of cases and deaths related to COVID-19 in the country, and despite increased federal and provincial pleas to suspend non-essential services and keep workers safe, TC Energy have been more than clear that they are continuing work during this time on the Coastal Gaslink pipeline.

Not only does this come across as the company using a global pandemic as cover for continuing construction of the colonial pipeline, which would go through unceded Wet’suwet’en territory and cause continued cultural and environmental harm, it poses a health hazard to TC Energy workers as well as the their home communities. Continuing work on this project puts hundreds of workers and community members at risk and will further strain northern medical services, all in the name of capital.

In their latest Construction Update, TC Energy reveals that they are increasing worker accommodations along specific sections of the route, including the building of new camps and lodges. They are also increasing storage capacity for new pipe as well as construction work. The specific document, published March 17, 2020, has no discussion of their COVID-19 policy. The virus seems to not mean anything to the company’s continued expansion. They do have a policy that can found on their site, and there is little to no mention of slowing down construction or expansion of projects.

All major non-regional offices are closed, making it harder for the public to contact and voice their concern during this time. There is also very little in the way of worker safety: the policy only goes so far as to monitor for symptoms and increase cleaning. Continuing this work also means that the RCMP will keep their increased presence in the proximate communities. This is all happening while clan meetings to discuss rights and title have been postponed and healing centers are on lock down. With these workers being brought in from all over Canada and BC, and forced to work in areas with limited medical access, it’s no surprise that these camps could become areas for the disease to spread.

All this is occurring while the oil and gas industry is set to receive a possible $15 billion federal bailout package. At the same time, our healthcare system is being strained due to decades of budget cuts, meaning less staff and resources to help test and aid patient recovery. Workers are also being forced to work in unsafe conditions, or being laid off with a social safety net that pales in comparison to planned corporate bail outs. Many cannot afford to stay off work, and either must work while they are immunocompromised or simply not be able to purchase the needed supplies and food while home.

These effects are magnified among those most marginalized within the population, like those who are homeless, those with disabilities, those who are temporary or cash workers. The inequalities and failures of capitalism are starting to be laid bare and workers around the world are starting to take note, gain confidence, and demand long lasting change. There is a real possibility for organizing within this struggle.

TC Energy’s actions are not unique. Many corporations are forcing employees to work in increasingly unsafe conditions, while these same companies and government are showing more and more a desire to protect the economy over people. And this is the terrible contradiction of capitalism that millions around the world are now being forced to live with: social and public needs are directly counterpoint to the system.

It is now our task to connect the struggles of those around the world and fight for long lasting change in order to build the confidence and capacity of the working class. This pandemic has brought with it xenophobia and racism, the rescue of profits rather than people, and more. It has also brought with it the exposure of capitalism: a system that will do whatever it takes to maintain itself over the health and wellness of those who live within it.

But a system that feeds off Indigenous land and working class labour is vulnerable to front-line communities defending their land and workers withdrawing their labour. It has shown us that we have the power in society, and we can organize and work together to create a better world.