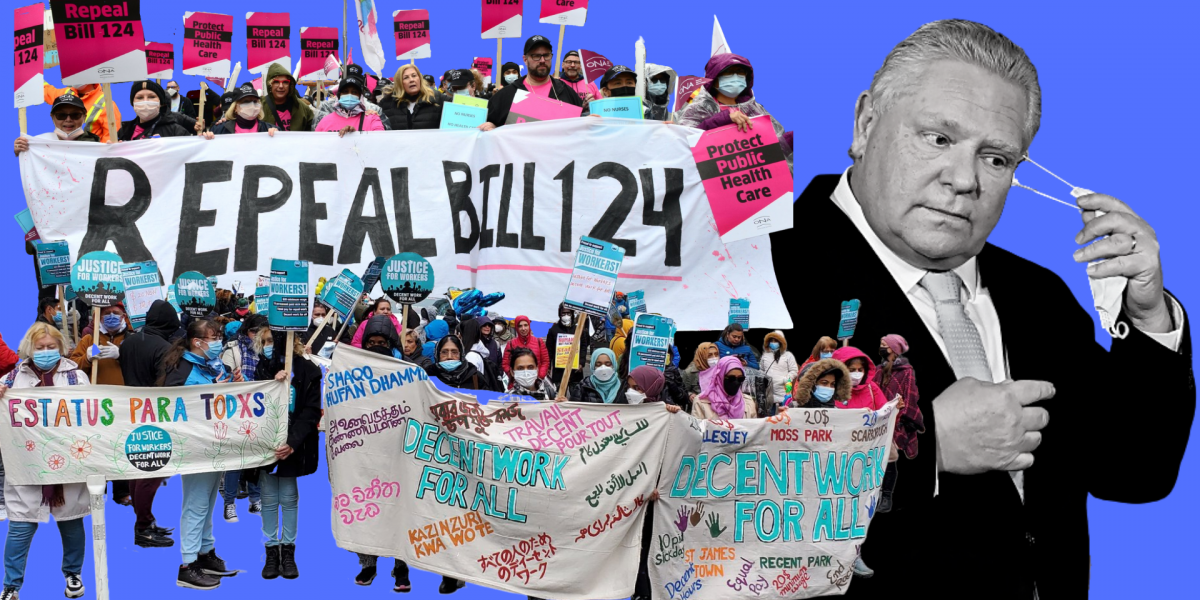 Ford’s government has attacked workers’ rights, cut public services, gone after teachers during their strike and repeatedly mishandled the pandemic. But with less than a month to go before the June 2 election he is leading in the polls. To change this we need to build strong movements that raise people’s expectations, put workers and racialized communities’ needs front and centre and aim to shift the political terrain to the left.

Last year at this time, during the third wave of COVID-19, Ford’s poll numbers bottomed out. Instead of legislating paid sick days and greater protections for workers to address the pandemic, he was giving the police more repressive powers and closing parks. After mass opposition, Ford retreated and promised the “best paid sick days in North America”, though he only provided three temporary days. This was the beginning of a broader shift by the Conservative government to soften their image and rebrand themselves, from making Ontario “open for business” to claiming they are “working for workers.”

A wolf in workers’ clothes

Through the fall of 2021 and early 2022, Ford and his Labour Minister Monte McNaughton introduced a series of bills that claim to support gig workers, temp workers, migrant workers and minimum wage workers. These have all been couched in a language of supporting workers. But the actual legislation enacted by the Ford government over the last year is designed to look nice and do little for workers–from providing far less than what workers need, to outright attacks.

Ford raised the minimum wage to $15, which he never would have done without a strong movement for decent work. But this is less than what the minimum wage would be had he not frozen it for years, let alone the $20 minimum wage that workers are demanding. Ford claimed to support migrant and temp agency workers by going after “foreign recruiters”, but is doing nothing against Canadian bosses who exploit these workers and is not legislating equal pay for equal work. Ford passed the “Digital Platform Workers’ Right Act”, which claims to support gig workers but actually further entrenches misclassification and goes against the Gig Workers’ Bill of Rights.

Ford should be judged on his actions not his rhetoric. Since coming into office in 2018 Ford  froze the minimum wage, rolled back paid sick days for workers, reversed equal pay for equal work legislation, cut public services, forced teachers out on strike and enacted a sweeping wage repression bill in the public sector. At every opportunity Ford has sided with the bosses over workers, even during the pandemic–including voted over 27 times against paid sick days legislation, and further privatizing long-term despite the catastrophic death toll in for-profit LTC. There is no doubt that if he remains in office he will continue to put profits over people’s lives.

The Liberals have bounced back in the polls since the last election. But while they may have regained some of their voting base, they are struggling to present any kind of effective opposition.

Years of the Liberals being in power have hindered their credibility. Like the Conservatives, previous Liberal governments attacked teachers, cut healthcare funding, privatized public services, froze the minimum wage and only increased it after a mass movement, and were mired in numerous corruption scandals. Remember it was the Liberal record that allowed Ford to win the election last time by promising to stand up for the “little guy” against the elites, to listen to healthcare workers and to end hallway medicine.

But after years of deadly austerity, it is now the Liberals promising to provide an alternative to Ford. They have felt the pressure from the movement for decent work, and while they only delivered 2 paid sick days a few years ago now support 10. But they are also trying to restrain the movement: their current leader Steven Del Duca is campaigning on bringing in a regional living wage model, which would be a disaster for workers. It would put less money in workers pockets than raising the minimum wage to $20, it would means test wages to social spending, entrench unequal pay for equal work  and create more divisions amongst workers across the province.

The NDP, which is the official opposition, has yet to capture the anti-Ford vote. After years of ineffectively amplifying, and sometimes even undercutting movement demands, the recently released NDP platform is well to the left of what has typically been on offer from the ONDP. The party is echoing demands for a $20 minimum wage, equal pay for equal work and 10 paid sick days.

But platforms aren’t enough. What matters more is what the party campaigns on and how it goes about campaigning. If the campaign is focused on Horwath and governing responsibly, rather than about change and the issues actually impact peoples’ lives, it will fail. The NDP needs to lead with raising the minimum wage, investing in public services and taxing the rich.

But defeating Ford requires more than saying the right things, in the right way, at the right time. If the NDP is to defeat Ford it must enthuse, inspire and aim to transform what people think is possible. The socialist perspective on social transformation is helpful to understand how we take on Ford before, during and after the election.

While parliamentary democracy is a colonial and capitalist institution that will never deliver social transformation, socialists view elections as an important site of struggle because this is where most people engage with politics. However, it is important to emphasize that work in the electoral arena should serve to amplify and advance movements, not the other way around.

The accent of our organizing must squarely be on the movements, and for good reason. The project of socialism is about the self-emancipation of the working class. It is about defeating structural racism, settler colonialism and all forms of oppression. This means winning a majority of people to this view, the actual transformation of mass consciousness along with the transformation of society. So how should we go about doing this?

The socialist gambit is to look at the uneven spectrum of working class opinion and help organize a section of the class to take action via campaigns and movements in order to win over wider layers. It is through action that workers gain experience, confidence, and transform their ideas about what is possible and how society works.

The parliamentary road to socialism, on the other hand, de-emphasizes the transformative potential of movements for the illusion of power at the ballot box. It aims to put forward a program or policies which can win enough support at election time, and which can be implemented within the framework of capitalism. The leftwing and rightwing of social democracy differ on what constitutes a winning platform, but agree on reflecting working class opinion within the confines of the market. This also determines policies that the NDP deliver when elected: the BC NDP campaigned on decent worker and climate justice but have instead supported the Site C dam and attacks on Wet’suwet’en, and only legislated 5 paid sick days when the vast majority were demanding 10.

Instead of hoping the NDP reflects popular opinion, socialists aim to transform popular opinion through struggle. Movement organizing is about raising people’s expectations and building the confidence to act. Winning popular support for issues to put pressure on political parties to respond and creates the basis to win these reforms no matter who is in government. This is precisely how movements have won higher minimum wage and paid sick days–regardless of who is in power.

Building the power to win

Passively waiting for Doug Ford to be defeated by the NDP or Liberals at the ballot box is not an option. This is why the May 1st day of action was so important. We need to continue to organize for a workers’ first agenda, build the Justice for Workers campaign and reforge rank and file networks of activists willing to organize and fight during and after the election. And if Ford does win it will not be on a confident platform of attacking workers, it will be because he had to retreat and claim to be working for workers–including partially reversing his own policies by raising the minimum wage and providing paid sick days.

It is our movements that caused Ford to retreat, shifted the Liberals on paid sick days and strengthened the NDP platform. These movements need to keep up the momentum after the election. This is how we defeat Ford’s big business agenda come what may.