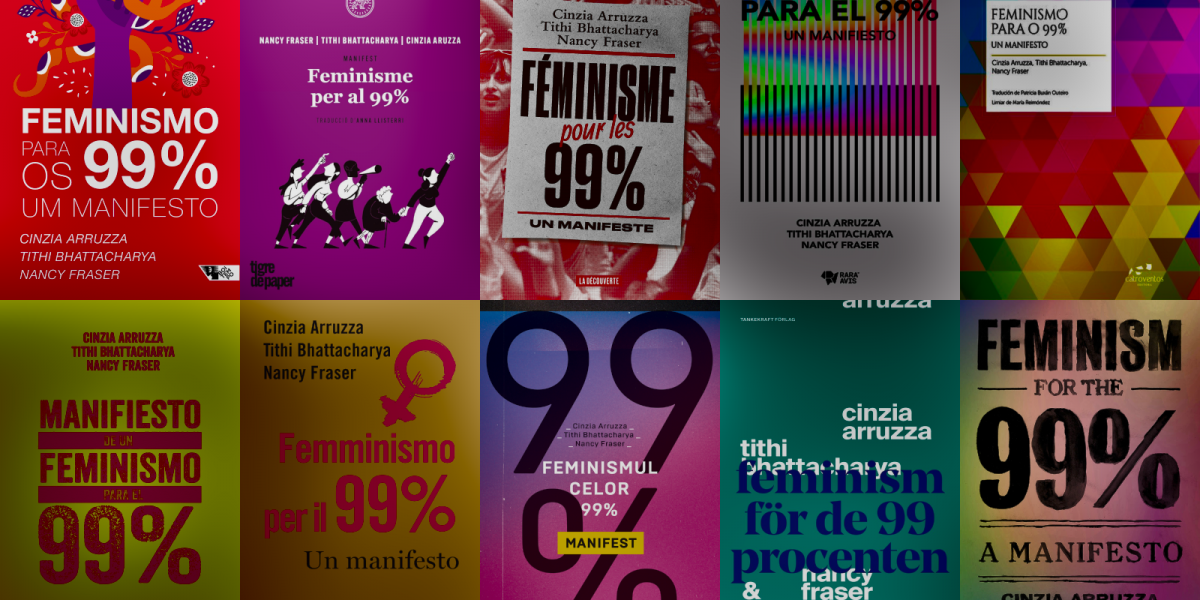 Feminism for the 99%: A Manifesto by Cinzia Arruzza, Tithi Bhattacharya, and Nancy Fraser (Verso, 2019)

Always shape-shifting, capitalism has recently assumed a new form: the woman in power. The modern workings of neoliberalism have given rise to a capitalist feminism that promises that social equality is just a female president, or a gender-balanced corporate board of directors, away. In North America, we regularly find avatars for feminism and resistance that are instead just “a … vision of equal opportunity domination: one that asks ordinary people, in the name of feminism, to be grateful that it is a woman, not a man, who busts their union, orders a drone to kill their parent, or locks their child in a cage at the border.”

It is from this observation that Cinzia Arruzza, Tithi Bhattacharya, and Nancy Fraser begin their slim 2019 volume Feminism for the 99%: A Manifesto. The Manifesto is the expansion of a brief appeal for a militant international strike by eight well-known activists and professors, including the three authors of the Manifesto, published in February 2017.

As a document that attempts to cinch together a vast amount of history (of feminist and socialist organizing; of class struggle including historical and contemporary strikes; and of the global nature of these efforts), the Manifesto is certainly ambitious. It makes necessary arguments about not just how to frame the issues but how to rally a response as the landscape of global capital buckles under crisis in the twenty-first century.

Having identified the “lean-in” corporate feminism espoused by Facebook COO Sheryl Sandberg, the Manifesto names another major pole of modern feminism. On March 8, 2018, a twenty-four-hour feminist strike in Spain was supported by five million marchers and marked the occasion of International Women’s Day. The authors sketch in these competing visions—equal-opportunity domination versus a liberatory, collective struggle against capitalism—insisting that there is no “viable middle way.”

They write, “We owe the dearth of alternatives to neoliberalism … [T]hat exceptionally predatory, financialized form of capitalism … has raised the stakes for every social struggle, transforming sober efforts to win modest reforms into pitched battles for survival.” It’s fair to say that the time for a conciliatory “middle way” has never been ripe. But the authors are correct that the existential nature of the climate crisis alone renders any compromise within capitalist parameters unthinkable.

Arruzza, Bhattacharya, and Fraser, all academics involved with or having organized the International Women’s Strike in the United States, divide the manifesto into eleven theses followed by an explanatory postface. The theses, each expanded upon in a short section of text, develop the theory and praxis of this “feminism for the 99 percent”: a feminism which identifies capitalism as the source of inequality, accounts for our particular modern forms of crisis, redresses the inverted valuation of production and social reproduction, and exposes the false promises of other popular forms of critique and resistance.

Anchoring the Manifesto in praxis, the authors describe the changes that have renewed the power of the strike in the context of modern crisis. They refer to the walkouts and marches in Poland protesting that country’s abortion ban in October 2016 shortly followed by a massive strike in Argentina after the rape and torture of teenager Lucía Pérez, two events that precipitated the organizing of the International Women’s Strike, which was founded in 2017 and continued in 2018. In the hands of feminist organizers, the action of the strike, once defined as the withdrawal of (paid) labour, now includes “marches, demonstrations, small business closures, blockades, and boycotts” but also, importantly, the withdrawal of “housework, sex, and smiles.” In other words, feminist strikers refuse to treat the issues of waged and unwaged labour separately, as they have never been separate for women: “by redefining what counts as ‘work’ and who counts as a ‘worker’, [the new feminist wave] rejects capitalism’s structural undervaluation of women’s labor—both paid and unpaid.”

The interdependence (or, as the authors put it, “mutually constitutive” nature) of paid and unpaid labour, between production and social reproduction, is an animating theme of the Manifesto. As the authors remind us, “[capitalism’s] key move was to separate the making of people from the making of profit, to assign the first job to women, and to subordinate it to the second.” Of course, “people-making” entails more than physically reproducing, and crucially, it replenishes the labour force; social reproduction “means fashioning people with the ‘right’ attitudes, dispositions, and values—abilities, competences, and skills.” Arruzza, Bhattacharya, and Fraser explain how capitalism instrumentalizes social reproduction to maintain heteronormativity and the gender binary, support nationalist projects, enforce racist divisions of labour, and acculturate fresh classes of obedient workers.

The activities of social reproduction thus make plain the links between racism, colonialism, climate change, gender violence, and class oppression. The Manifesto importantly articulates a modern definition of class that includes social reproduction: “what makes class in capitalist society are not just relations that directly exploit ‘labor’ but also relations that produce and replenish it.” The authors therefore conclude that “class struggle includes struggles over social reproduction: for universal health care and free education, for environmental justice and access to clean energy, and for housing and public transportation.” It is only through linking traditional labour struggles around working conditions with the fight for high-quality public education and Indigenous sovereignty and self-determination, for example, that anticapitalist aims can be achieved by the global majority.

An equally important aspect of feminism for the 99 percent, though, is to imagine social reproduction beyond the ways that it is used, or even constituted, under capitalism. As the authors note in the Manifesto’s Postface, “[w]hile capital strives systemically to increase profits, working-class people strive, conversely, to lead decent and meaningful lives as social beings”—two aims that are fundamentally at odds. To withhold labour and people-making activities that serve capitalism in a strike is to redirect those social energies to the collective and to experience a being-together that is, even briefly, outside of capitalist logic. It’s no wonder that spaces of resistance are often spaces of both fury and joy.

Feminism for the 99%: A Manifesto offers a straightforward explanation of how a specifically modern form of capitalism creates economic, social, and environmental crisis, and how a modern form of socialism should respond. While readers unfamiliar with political theory will find an accessible explanation of key terms and ideas with relatively limited jargon, an audience well-read in Marx will still benefit from the extensive discussion of class that includes social reproductive work, especially that carried out largely by women of colour in the global North and South.

Manifesto for the movements

What can this manifesto do for our movements? First, and powerfully, the Manifesto provides an object lesson in how struggle and its articulation—or, praxis and theory—can and must be mutually generative. Inspired by independently organized women’s strikes in Poland and Argentina, the authors of the Manifesto witnessed the energy of global feminist organizing and published their call for an International Women’s Strike, which was part of the catalyst for millions of women and allies to take to the streets in 2017 and 2018. In turn, in 2019, the authors published the Manifesto, a clear call for further action grounded in the strike as well as a description of this political vision. The vision is refined by the experience of organizing, and it feeds back into that work.

Second, the Manifesto clarifies and defends the staunchly intersectional political character of “feminism for the 99 percent,” providing us with a way to appreciate the heterogeneity of social movements while maintaining our common goal. The authors write: “[c]ontra fashionable ideologies of ‘multiplicity’, the various oppressions we suffer do not form an inchoate, contingent plurality … all are rooted in, and reinforced by … capitalism.” Nevertheless, they contend that “class solidarity is best advanced by reciprocal recognition of the relevant differences among us—our disparate structural situations, experiences, and sufferings; our specific needs, desires, and demands; and the varied organizational forms through which we can best achieve them.” In this way, they promote an approach that circumvents debate around identity politics to continue with the necessary work of “unit[ing] existing and future movements into a broad-based global insurgency.”

Finally, the Manifesto offers a source of pride and of confidence in the examples of global feminist action that have taken place even since its publication. In 2019 and 2020, movements across the world have been led by women who are enacting a vision of feminism for the 99%: one that is anticapitalist, anti-imperialist, and anti-racist. Women have been at the forefront of the revolution in Sudan, the protests in Chile, climate strikes in Canada and internationally, and protests against the new citizenship law in India that has resulted in devastating violence targeting mosques and Muslim communities, just to name a few examples.

Feminism for the 99%: A Manifesto deserves to be read as a source of political analysis and history, but it will also provide encouragement to keep organizing for those whose feminism is and has always been a fight for the 99 percent.