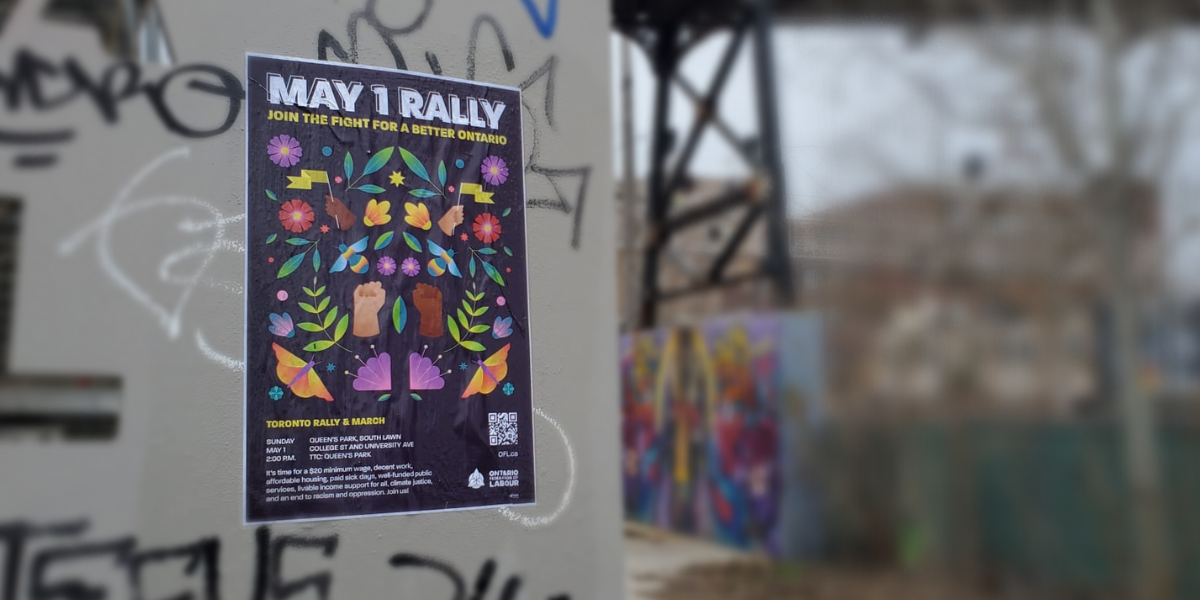 Ontario finally goes to the polls on June 2. Ford has mishandled the pandemic at every turn and has a long record of attacking workers and public services. But there is pandemic fatigue, and in the past few months he has launched a charm offensive–proclaiming he is “working for workers”, raising the minimum wage after freezing it for years, and claiming he supports gig workers while legislating misclassification. Now, a month before the election, he has a comfortable lead.

However, it would be a mistake to treat Ford’s victory as inevitable. If we are going to defeat Ford we will have to do more than hope he is voted out on June 2: we will have to organize. For months labour and community groups across Ontario have been organizing towards the May 1 province wide day of action calling for a workers’ first agenda. By showing what putting workers first really looks like, this day of action can expose Ford’s agenda, set the terms of debate for the election, challenge Ford at the polls and build the networks for stronger movements beyond the election.

The May 1 day of action offers a bold vision that speaks to the entire working class. It means challenging Bill 124’s wage cap for public sector unions, as well as raising demands impacting all workers like legislated paid sick days, a $20 minimum wage, and rights for gig workers.

It also means uniting for racial justice in our workplaces and communities, demanding real action on climate change, advocating for immigration status for all, challenging the crisis of affordability ravaging our communities, and building stronger public services, income supports and housing justice.

The 21 actions across the province that the Ontario Federation of Labour has been organizing is a big opening for the left to highlight the needs of workers and our communities during the election. This is a chance to help define the issues that are talked about, debated and ultimately motivate people to vote during the upcoming election.

But more than simply being about the election, the May 1 day of action in Ontario is about building and renewing our rank and file networks and campaigns inside and outside the trade union movement.

Over two years the pandemic has shaken up the left in Ontario. Many once active campaigns and existing activist networks inside and outside unions no longer exist or are much diminished. At the same time, new layers of organizers, campaigners and trade unionists have taken root, and are looking for opportunities to organize and build. The May 1 demos have the potential to unearth and connect new organizers as well as reinvigorate many who are feeling beaten down by the last two years.

If we are serious about taking on Doug Ford and the big business lobby we need to seize each and every opportunity to build campaigns, reforge our networks of activists who are willing to organize and build the confidence of the widest possible layer of people across the province to take action. This offers the best hope of changing the outcome on June 2, and of improving the terrain for organizing beyond the election. Because whatever the outcome of the election, we need to get ready to fight for stronger public services, to confront racism and take on the power of the bosses. And the only way to do that effectively is to have as strong a layer of organizers and militants willing to fight and organize.

May Day has a long, vibrant and international history of workers fighting for a better world. In the mid 1880s strikes and protests for a shorter workday led by trade unions, socialists and anarchists in the United States culminated in the first May Day action in 1886 in Chicago. Inspired by the fight for the eight hour workday, unions and socialists organizations around the world marked May 1 as International Workers Day starting in 1890.

The pandemic has supersized inequality and inequity in Ontario. In the May Day tradition of fighting for a better world, we should aim to use this May Day to fight for a better Ontario for all, to boost the confidence of all those wanting to fight back against the bosses and the politicians who are fomenting racism and putting profits before people.

With less than one week util May 1, here are some ways we can continue to build the province wide actions happening locally:

From May 1 to June 2 and beyond

The day of action on May 1 will amplify the fight for workers rights across the province and around the world. After May Day we can celebrate the gains we have made in building the leadership of new activists and community members. However, as socialists and organizers, we know the fight does not stop here. We need to organize debriefs provincially and regionally so that we can reflect on what went well on May 1, where we fell short and what we can improve on in the future.

After we debrief, we will be able to continue mobilizing for the June 2 election. And after the election we need to to continue organizing, because no matter which party is elected, we need to keep pushing for a stronger and more equitable Ontario.