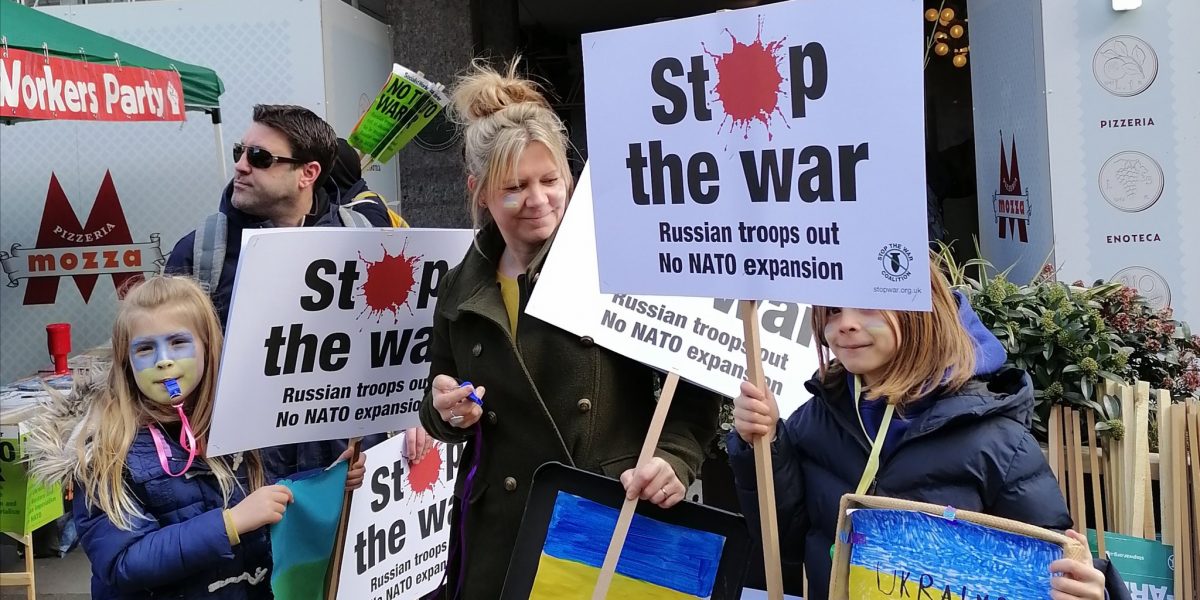 Russia’s invasion of Ukraine is not even two weeks old and already has caused widespread devastation. Thousands have died, over a million Ukrainians have fled the country and the war looks set to continue. Understandably, many in Canada watching this tragedy unfold feel the pull to “do something”.

While there is widespread revulsion of war, support for Ukrainian refugees and opposition to Russian oligarchs, these genuine sentiments are being driven rightward by our ruling class and corporate media.

Russia’s invasion of Ukraine is completely unjustified and is clearly a crime of aggression. There is no defending Putin and the Russian ruling class. There is universal condemnation of Putin and Russia amongst the establishment and beyond in Canada. Every political party in the country has denounced the invasion. And amongst the larger working class in the country, one would have to struggle to find a voice that supports Russia’s invasion.

There is even visible antiwar sentiment within Russia, despite mass arrests. This is courageous and the correct position if you are in Russia. We should amplify it every chance we get, because this is the best way to undermine Putin’s militarism and authoritarianism. But the North Atlantic Treaty Organization (NATO) doesn’t want a mass movement against Russian autocracy: the West opposed the Russian revolution against Tsarism a century ago, and would oppose a similar movement today. So instead the media has quickly adopted national narratives about Russian aggression, silencing opposition within Russia and claiming the only way to stop Putin is through NATO militarism.

While there is no justification for Russia’s invasion, we must insist there is an explanation of why this is happening beyond simply saying Putin is a bad guy. For those of us in the West, we must also understand and denounce our own ruling class’ role in leading us down the path of this war. Our government is upping troop deployments and arms shipments to the region. NATO’s aggressive eastward expansion, the geopolitical, economic and military threats and advances in contestation with Russia all contributed to this moment. The expansion of NATO, which is not a defensive military alliance, onto the doorstep of Russia was a provocation with predictable results. Further NATO militarism provides Putin with an excuse to crack down on dissent within Russia, and will only exacerbate the humanitarian crisis internationally.

Open the borders, support all refugees

As with all wars, the invasion of Ukraine has driven people from their homes. It is encouraging to see mass support for Ukrainians refugees. But rather than open the borders and support all refugees, the government and media are using the refugee crisis to build support for NATO which fuels international displacement.

In response to the war on Ukraine the media has framed an unabashedly racist response to refugees: open the borders to white Europeans displaced by Russia, but keep the borders closed to Black and racialized migrants displaced by Western military and economic policies—and Black people within Ukraine.

The best way to support Ukrainian refugees is to fight the racist border policies of our own government, support all refugees, and to amplify the demands of migrant justice organizations. As the Migrant Rights Network explained, Immigration Canada’s response to the War in Ukraine must include: government assistance to all refugees; open work and study permits for all without requiring job offer, being in-school and valid permits; no detentions and deportations and status for all; safe passage for all, unite families.

As is always the case with war, politicians and the ruling class start wars, but it is everyday people who suffer.

Putin’s invasion for Ukraine to gain control over its resources and to increase its geopolitical leverage vis à vis other states should be condemned. But this is not a uniquely Russian phenomenon. Imperialism is based on military and economic rivalry, and contestation over the control of energy resources is all too familiar for those of us in the West who have mobilized against wars from Iraq to Afghanistan.

In addition to troop deployment our government is also joining in sanctions. This is being justified as taking on Russian oligarchs. But as with previous sanctions in Iraq, sanctions and the economic hit will be felt most by the working class, not the ruling class. We know the Russian people have much more in common with Ukrainians than they do with Putin. But sanctions are a form of collective punishment that will only stoke resentment and nationalism, making it harder for those in Russia who oppose the war.

War is a breeding ground for reaction. Just look at how quickly national narratives were relied upon to explain what happened and what should be done. Russian paralympians were banned from the paralympics, a plane in Yellowknife was grounded because it carried Russian passengers, and even Russian cats were banned from competition. While some of these are clearly absurd war hysteria, they point to a troubling trend.

There is no dissenting opinion in the political mainstream or the press about the role of NATO expansion and western imperialism in creating the conditions for war. To point out NATO and our own government’s role in this debacle means getting loudly and quickly denounced.

As a result, revulsion at Russian militarism is being turned into support for NATO militarism rather than building an international movement against all war. Just look at the very reasonable Stop the War statement in the UK that was signed by 11 Labour MPs. It critiqued Russia, NATO and called for a withdrawal of Russian forces and a negotiated settlement to quickly end the war. This was attacked by Labour leader Keir Starmer, who threatened Labour MPs with deselection – all 11 had to withdraw. The previous Labour leader Jeremey Corbyn thankfully stood fast.

And what of our own oligarchs? We are two years into a pandemic where thousands have been infected on the job because billionaires like Galen Weston or Jeff Bezos deny paid sick days. We are in a deepening climate crisis because oil executives demand more profits, and our government serves them by invading Indigenous territories.

The main enemy is at home

To mention this is not to engage in whataboutism, it is to expose our ruling classes’ shameful role in fomenting colonialism, imperialism and war. To simply line up behind our own ruling class is the surest way to eviscerate a left alternative to war and reaction. To be an internationalist, to stand in solidarity with those resisting imperialism, means taking on our own ruling class. This is what we can affect, what we can contribute to in the fight for a better world. It is easy to denounce Putin here: everyone from the PPC to the NDP is doing it. The Russian invasion should be roundly condemned, But we have to go further. We cannot “expose” Putin and Russian oligarchs while living within the Canadian state, but we certainly can and should take on our oligarchs and our government. That is why the best socialist and most effective socialist tradition highlights that the main enemy is at home.

War has its own bloody logic that can easily escalate beyond the intentions of those involved. This is why calls for a no fly zone or widening of the war are so dangerous. We have to remember state and the military are not ours to direct. We cannot pretend that if we call for them to take action that we direct them. They are instruments of the ruling class, not the working class. Our duty is to hem in our ruling class’s drive for war and violence. This is how we can be internationalist. We have to confront our own government’s actions, and oppose the system which creates these wars.

If we are truly against the war in Ukraine we need to oppose all wars; if we truly support Ukrainian refugees we need to support all refugees; and if we truly oppose Russian oligarchs we need to oppose the system of oligarchs. This means we have a responsibility to challenge our own government’s militarism, our own government’s racist border policies, and our own economic elites. You might be marginalized and critiqued for it, but it is where we have to start. Otherwise we are rowing with the current of war, displacement and capitalism.