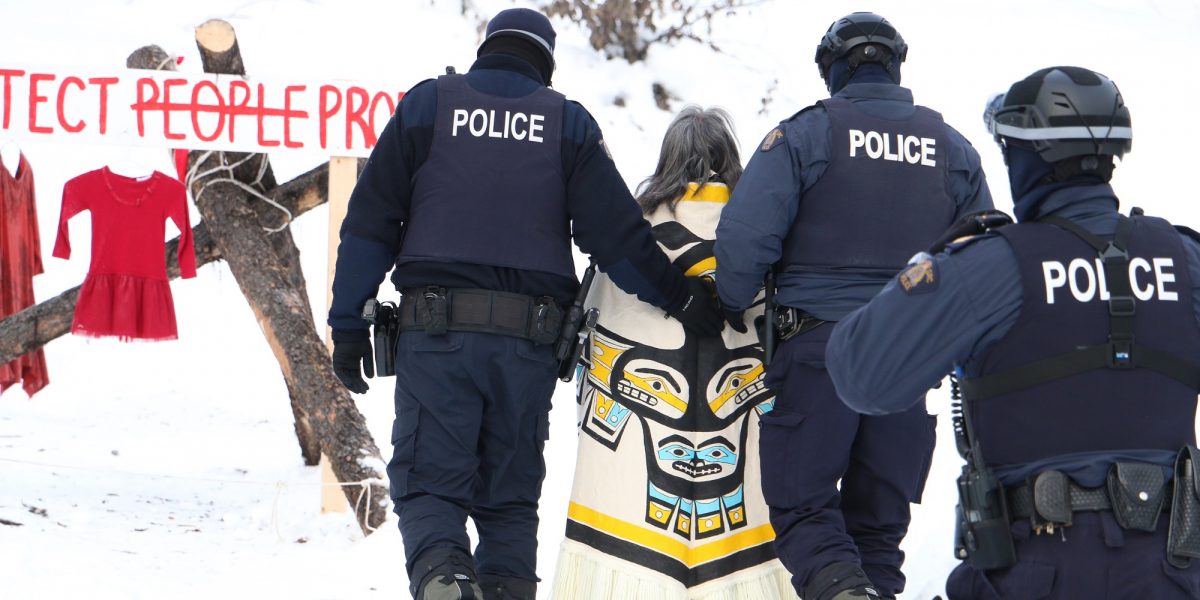 When members of Indigenous nations erect blockades to stop pipeline construction in their territories Canadian courts have routinely relied on “the rule of law” to justify their destruction. But this justification obscures the real legal question at the core of the conflict: whose law “rules” on this territory in the first place?

On November 14, 2021 the Gidimt’en Clan of the Wet’suwet’en Nation issued an enforcement notice to TC Energy / Coastal GasLink — a gas & oil infrastructure company constructing a pipeline on Wet’suwet’en territory — evicting all CGS employees from Gidimt’en land. As Wet’suwet’en Hereditary Chiefs have explained, “Coastal Gaslink has violated the Wet’suwet’en law of trespass, and has bulldozed through our territories, destroyed our archeological sites, and occupied our land with industrial man-camps.”

The 670-kilometre (417-mile) pipeline is slated to cut across Wet’suwet’en traditional territory that covers approximately 22,000sq km (8,500 sq – miles) in northern British Columbia. In response to the enforcement notice, Coastal GasLink issued a press release  stating that it has the right to “continued safe access” to the area according to a B.C. Supreme Court injunction. On November 18, 2021 the Royal Canadian Mounted Police raided the blockade and surrounding area in order to enforce the injunction, arresting 29 people.

In a decision granting the company’s request for the injunction against the blockade, the Court found that “self-help remedies, such as blockades, undermine the rule of law and the administration of justice.” When members of Wet’suwet’en Nation argued that the blockade was built in accordance with Wet’suwet’en law on Wet’suwet’en territory, the Court refused to recognize such law as “an effectual part” of the Canadian legal regime. The Court concluded that “there is a public interest in upholding the rule of law and restraining illegal behavior and protecting of the right of the public, including the plaintiff, to access Crown roads.”

This all presupposes one fundamental question:  on what legal basis do Canadian Courts claim jurisdiction to “uphold the rule of law” in this particular territory?  The answer: the Canadian state’s claim of sovereignty is dependent on a long discredited legal construct that assumes the racial superiority of European settlers — the Doctrine of Discovery. In order to understand how the Doctrine of Discovery lies at the heart of the Canadian state’s claim to sovereignty over this area it is helpful to look at the Supreme Court of Canada’s case law on aboriginal title and how the British Crown first claimed sovereignty over this territory.

According to the Supreme Court in Tsilhqot’in Nation v. British Columbia (2014): “At the time of assertion of European sovereignty, the Crown acquired radical or underlying title to all the land in the province. This Crown title, however, was burdened by the pre-existing legal rights of Aboriginal people who occupied and used the land prior to European arrival.” In other words while “Aboriginal title” continues to exist under Canadian law it does so on top of the State’s underlying claim of ultimate sovereignty over the terrority in question. However, it is unclear in the Court’s analysis exactly how Europeans legally “asserted” their sovereignty over Indigenous territory in the first place.

Did Europeans engage in conquest? For Aboriginal peoples located in Canada the answer is no:   In Haida Nation v. British Columbia (Minister of Forests) (2004) the Supreme Court found that “put simply, Canada’s Aboriginal peoples were here when Europeans came, and were never conquered.”

Did Europeans simply claim that Indigenous people did not own the land? No. The Supreme Court recognized in Tsilhqot’in (2014) that “the doctrine of terra nullius (that no one owned the land prior to European assertion of sovereignty) never applied in Canada, as confirmed by the Royal Proclamation of 1763.”

So even Canada’s colonial courts admit that Europeans did not gain ownership over, conquer or sign a treaty over the land in British Columbia. So how exactly did Europeans “assert” sovereignty over this land? The Court in Tsilhqot’in (2014) says that “the starting point in characterizing the legal nature of Aboriginal title is Dickson J.’s concurring judgment in Guerin” where Justice Dickson addressed the theory underlying Aboriginal title. So let’s look there.

According to Justice Dickson in Geurin v. The Queen (1984) the Court’s jurisprudence on Aboriginal title is “consistent” with the position of Chief Justice Marshall in the leading American case of Johnson v. M’lntosh, 8 Wheaton 543 (1823).  In that case Chief Justice Marshall found that despite the fact that some indigenous rights to occupy and possess their land survived European claims of sovereignty “the principle of discovery which justified these claims gave the ultimate title in the land in a particular area to the nation which had discovered and claimed it.” But how exactly does “the principle of discovery” justify  a claim to land that has been occupied by various nations for millennia?

Justice Dickson quotes Justice Marshall’s explanation that it is the “exclusion of all other Europeans” that “necessarily gave to the nation making the discovery the sole right of acquiring the soil from the natives, and establishing settlements upon it.” After such exclusion takes place an Indigenous nation’s “rights to complete sovereignty, as independent nations, were necessarily diminished, and their power to dispose of the soil at their own will, to whomsoever they pleased, was denied by the original fundamental principle, that discovery gave exclusive title to those who made it.” In other words, according to the Doctrine of Discovery a European nation can claim sovereignty or exclusive title to a territory by simply excluding all other European nations from the area regardless of who else is living there.

Of course in order for the Doctrine of Discovery to make this kind of legal distinction it requires one fundamental assumption: belief in the racial superiority of European settlers. Without this foundational assumption there is no legal basis upon which a European nation can claim to have “discovered” land that was occupied by indigenous nations for thousands of years prior to European arrival and continues to be occupied by these nations to this day.

So how exactly did the British Crown claim to have “discovered” Wet’suwet’en territory? According to the Supreme Court in Calder et al. v. Attorney-General of British Columbia (1973) the area of British Columbia where Wet’suwet’en territory is located  “did not come under British sovereignty until the Treaty of Oregon in 1846” which extended the boundary between the United States and British North America west of the Rocky Mountains along the 49 parallel.  The treaty was “in effect, a treaty of cession whereby American claims were ceded to Great Britain.”

No Indigenous nation, including the Wet’suwet’en Nation, was a signatory to this treaty.  But according to the Doctrine of Discovery they didn’t need to be.  After all, by signing the treaty of Oregon, the British successfully excluded other Europeans (in this case Americans) from the territory. By doing so they gained “exclusive title” to the land despite the fact that indigenous nations in this area were never conquered and never entered into any agreement  surrendering their territory. When the Colony of British Columbia entered into Canadian Confederation in 1871 the British Crown’s baseless claim of sovereignty over Wet’suwet’en land was transferred to the Canadian State.

So today when Canadian Courts claim jurisdiction to enforce “rule of law” on Wet’suwet’en land they continue to do so on the basis of the Doctrine of Discovery and the unstated assumption that Indigenous peoples remain inherently inferior to European settlers. It follows from all this that the legal question raised by Indigenous blockades is not how to balance the importance of enforcing “rule of law” against the right to engage in civil disobedience, but which legal regime has a greater claim to legitimate authority over the territory in question. It is a choice between recognizing claims for sovereignty that are rooted in human societies drawing the essentials of life from a particular territory since time immemorial, and a claim for sovereignty that is rooted in a discredited legal construct that places European settlers at the top of the racial hierarchy.

Some Justices have even begun to recognize the legal house of cards that Canada’s assertion of sovereignty is built on.  As noted recently by the Supreme Court of British Columbia in Thomas and Saik’uz First Nation v Rio Tinto Alcan Inc., 2022 BCSC 15 (CanLII):  “Some argue, in my view correctly, that the whole construct is simply a legal fiction to justify the de facto seizure and control of the land and resources formerly owned by the original inhabitants of what is now Canada”. However, when resource extraction companies demand that Canadian Courts issue injunctions to protect their investments, their requests are routinely granted. According to a study performed by the Yellowhead Institute 81% of injunctions filed against First Nations by corporations in Canada have been granted by Courts:

In capitalist societies it is the legal recognition of basic human equality that must bend to the needs of the colonial project— not the other way round. As concluded by the Supreme Court of British Columiba in Thomas and Saik’uz First Nation v Rio Tinto Alcan Inc., 2022 BCSC 15 (CanLII):  “while the legal justification for Crown sovereignty may well be debatable, its existence is undeniable and its continuation is certain.”

That’s why the blockades, far from “undermining the rule of law and the administration of justice,” are actually about reaffirming Indigenous law and administering climate justice. And there’s a public interest in upholding Wet’suwet’en and restraining the illegal behaviour of extractive companies and colonial courts. As Wet’suwet’en Hereditary Chiefs explained, “We reaffirm that Anuc ‘nu’at’en remains the highest law on Wet’suwet’en land and must be respected. We have always held the responsibility and authority to protect our unceded territories. Protection of our yintah (traditional territories) is at the heart of Anuc ‘n’at’en, and we will practice our laws for future generations.”