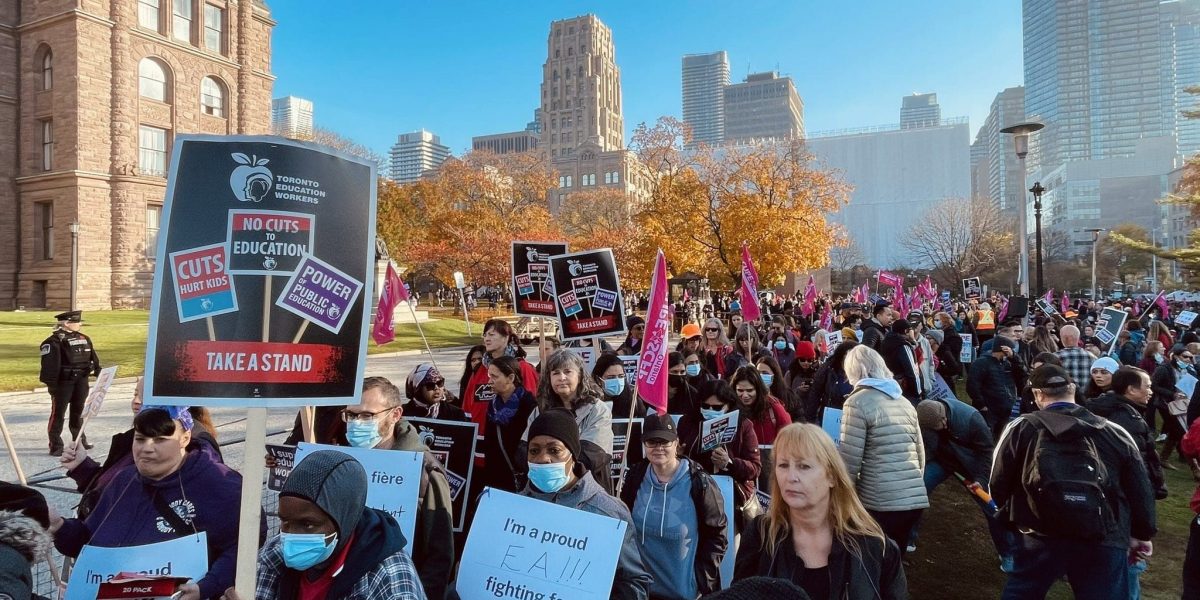 Pickets lines were up outside Conservative MPP offices and elsewhere in the province. In Toronto, a massive all-day picket line and rally was held at Queen’s Park, which the media estimated reached 10,000 people. But it wasn’t just striking workers; a huge number of parents, students, trade unionists, and other workers showed up. The mood was electric and defiant, and it was clear the fight was much broader than just education workers’ demands.

Their strike has turned into a class-wide fight over fundamental workers’ rights and the right to fight for a better life.

How we got here

Education workers have faced legislated wage suppression for more than a decade–in the form of Bill 115 and Bill 124 from a Liberal and Tory government respectively. During the height of the pandemic, education workers were told they were essential, but their paycheques didn’t reflect that fact. Between 2011 and 2021, they experienced an effective wage cut of over 11 percent. Their average annual wage is $39,000; more than half work a second job (or more) to make ends meet and over 25 percent regularly use a food bank.

With a worsening cost-of-living crisis underway, it was clear there was a strong demand for higher wages and better working conditions as a bargaining approach – something that has deeply resonated with other workers. The union was asking for a $3.25 per hour increase to catch up with inflation. After months of intensive and systematic organizing and literally tens of thousands member-to-member conversations, members gave a resounding mandate by voting over 96.5% to strike, with a turnout of 82.6%. It was this from-below, rank-and-file-focused approach that built a massive movement inside the union, and has made possible such a confident strike so far.

The government played hardball during negotiations, and it has now been revealed they were drafting anti-strike legislation long before negotiations got underway. When they finally came to the table, they offered workers a well-below-inflation wage increase of 1.5 percent (with some getting 2 percent). In the middle of negotiations, the government announced it was taking money out of public education by issuing cheques for $200 to $250 per child to parents to spend on educational services. These so-called “catch-up payments” were an overt attempt to bribe the public and, worse, to accelerate the privatization of public education. All that money could have been used to meet the workers’ demands and dramatically improve students’ learning conditions.

After the “no-board” report was issued, November 3 became the earliest possible date the workers could go on strike. Negotiations and mediation were ongoing, but it was clear the government had no intention of bargaining. CUPE was preparing for a strike, holding regional meetings and discussing with their members the potential government response to their strike.

When the OSBCU issued its strike notice on Sunday, triggering a November strike deadline, the government responded within hours declaring that they would introduce legislation that imposed a concessionary contract on education workers and take away their right to strike. While the government claimed it was doing everything in order to keep kids in school, it was doing anything but. The immediate reaction to the news on Sunday was pure fury by education workers and parents.

The following day, when the government introduced Bill 28 (the so-called “Keeping Students in Class Act”), they inserted the notwithstanding clause into the legislation. They knew their legislation was an unprecedented violation of the Charter, but didn’t care. It was meant to add fuel to the fire, by attacking all labour rights, not just education workers.

But their plan appears to have backfired – spectacularly. For the last month, there has been a burgeoning solidarity campaign with education workers, rank-and-file teachers, and decent work activists, led by the Justice for Workers campaign. Education workers themselves have been extremely organized and started reaching out at a rank-and-file level to community members and fellow trade unionists. Their #39KIsNotEnough campaign has energized and organized their members, and inspired the wider public.

Throughout October, these actions were repeated and grew. OSBCU provided leaflets and Justice for Workers “Support Education Workers” posters started to appear across the province. Rank-and-file teachers and parent groups, such as the Ontario Parent Action Network (OPAN), played a key role in building and amplifying these actions, as did the Ontario Federation of Labour (OFL), Ontario’s central labour body. These actions helped create a network of supporters who were ready and willing to take action to support education workers.

A week of struggle

So when the Tories introduced Bill 28 and widened the fight, there was already a layer of activists beyond the union’s 55,000 education workers ready to mobilize and build on the months of organizing the workers had done amongst themselves and their education colleagues and in their communities. On Monday, the OFL called an emergency rally in Toronto in response to Bill 28, and over 3,500 people took to the streets in under a day’s notice. This number far exceeded everyone’s expectations, but quickly showed there was a large appetite for action.

On Wednesday, the day after the emergency protest, as Bill 28 was being forced through the legislature, NDP MPPs were tossed out of the legislature for calling Premier Doug Ford a liar. The mood was defiant and helped build the confidence of NDP members and voters to resist the attacks on education workers and workers’ rights. That night, over 500 people joined the Justice for Workers phone zap, making over 2,000 calls to Conservative MPPs.

On Thursday, OPSEU had also announced it would support its education workers walking off the job on Friday. This was a clear message of defiance and a real escalation of the struggle. The evening before the strike, OPAN organized a rally of parents and families who gathered outside a downtown Toronto hotel where bargaining was underway inside. Hundreds of parents and kids showed up, again exceeding organizers’ expectations.

OPAN  has been crucial in helping push back against the narrative that parents are opposed to the education workers strike. By late Thursday, it was clear the mediation had completely collapsed and education workers would be out an “illegal” strike.

Schools boards announced their closures. Ford and Education Minister Lecce’s claim that they would do anything to keep kids in school had completely blown up in their face. The momentum was clearly with education workers and their supporters.

On Saturday another emergency rally was called by the OFL with just hours notice. It ended up shutting down the main intersection of Yonge and Dundas.

The entire week of actions helped build the confidence of people to act and put the Conservatives on their back foot. Early polling has shown broad public support for the education workers. This has steeled those inside the labour movement who wanted to take the fight to the Tories. Unions which had previously supported the Conservatives, like LIUNA, had started to publicly distance themselves. Elementary teachers who were bargaining with the government this week walked away from the table.

Whatever reservations some union leaders have had about publicly supporting education workers, the growing pressure from below, including from their own members who are leading the call for a fight, has pushed them closer to action. An important section of the labour leadership in Ontario – CUPE’s OSBCU, CUPE Ontario, OPSEU, and UNIFOR – have been leading and supporting the fight for education workers, and pushing other unions to to follow them. The massive outpouring of support from their members, other workers, and the wider public has vindicated their principled approach.

Things are moving extremely fast, and could escalate in the coming days. Amalgamated Transit Union Local 1587, representing Go Transit workers in the province, rejected their tentative deal by 81 percent and are set to strike on Monday at 12:01am. This strike, motivated by Metrolinx’s contracting out and wages, could turn out to be very disruptive and add to the sense that the Conservatives are a government of chaos. Discussions have been underway in all of CUPE Ontario (not just the education workers) about what they could do to join this fight. If the entire union takes action, it could unleash a massive response from the rest of labour.

For socialists and activists, the key task is to deepen and expand the kind of rank-and-file solidarity across all unions, and among non-union workers and the wider public, that has pushed reluctant leaders into action and that has built support and backing for the progressive, left-wing leaders who were already ready to fight and pushing hard in the labour movement.

The only way out is through

We can only beat Ford, defeat the attack on workers’ rights and ensure workers get what they deserve by escalating the struggle.

If we backtrack, if we slow down our fight or hesitate we are in trouble. The massive “illegal” strike by CUPE education workers and the “illegal” OPSEU education worker walkout have set the stage for a huge fight. ATU’s GO transit strike on Monday will escalate it further.

It’s only a few days into the inspiring strike of education workers, but it looks as if it could grow into a much bigger fight–not just for a fair settlement for those workers–but to repeal Bill 28 and to fight for decent work for all workers in the province.

Tories are on their back foot. Splits in the Tory party are real, but thus far are only occurring in the backrooms. We need to keep the heat on to crack the party. That means supporting increased worker action, public protests and continuing to building solidarity everywhere. We have to widen the struggle.

We can win this, but we can’t let up even for one second.