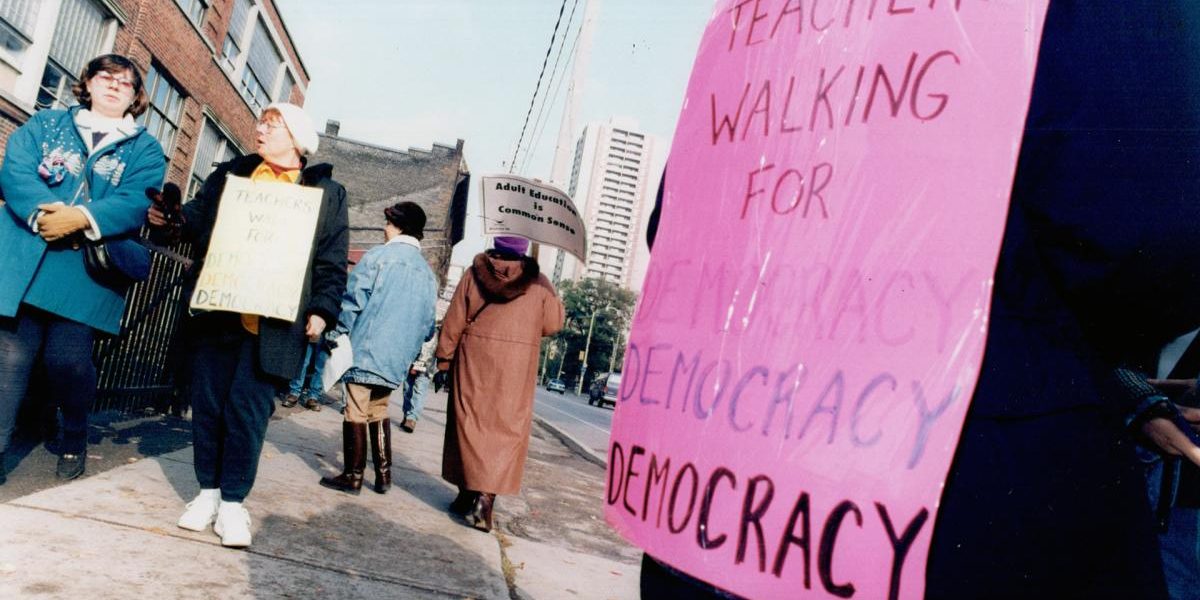 The labour movement in Canada was born in illegality. Our rights in the workplace, our rights to organize and have access to basic protections and benefits as workers, are the product of working people taking action – oftentimes in the face of repressive laws and physical violence from the state and employers.

The Ontario government’s draconian Bill 28, which takes away education workers’ charter protected right to strike and their human rights protections, and imposes a concessionary contract, is just the latest attempt by a government to repress the fundamental democratic right to strike and bargain.

There is a long record of government’s using unjust laws to repress the power of workers. But workers are far from powerless in the face of unjust laws. The law is not immutable, nor is it a reflection of justice. It is better understood as a reflection of the relative power in society. When employers and the ruling class are feeling confident or threatened by workers they will attempt to use the law to hamper worker power. But the history of unjust laws is the history of workers breaking those laws, and challenging employers and the state.

Ravaged by oppressive working conditions, skilled and unskilled workers formed the Nine-Hour League in Hamilton in 1872 and kicked off a broad class-based fight for a limited working day. This movement was at the heart of the Toronto printers strike that same year, in which printers went on strike for the nine hour day at George Brown’s Globe and Mail newspaper. Unions were illegal at the time and the strike committee was arrested. The labour response was massive and ultimately led to the passage of the Trade Union Act, which legalized trade unions.

While trade unions won legality, employers and the government looked to legislation and the courts to limit their power and scope. By the early 1900s employers turned to injunctions to attack striking workers. Injunctions were placed on iron workers, carriage makers, miners and even musicians who dared to employ effective picket lines. These workers faced jail time and fines. While injunctions could and did have a negative impact on workers’ struggle, they did not stop workers’ resistance. The government also turned to more repressive methods, such as calling on militias to suppress strikes in Hamilton, Winnipeg, and Kingston in 1906, Glace Bay in 1909, and Vancouver Island in 1913.

The state aimed to develop a mix of consent and coercion to manage unions. While unions might have not been illegal, much of their activity was treated as illegal. In the 1920s picketing wasn’t illegal, but the courts and the criminal code narrowed what was deemed legal picketing to such an extent that any effective picketing could be criminalized.

In the 1930s and 1940s, when labour militancy was on the rise, many of the most effective tactics and organizing drives employed “illegal” means. Sit-down strikes, factory occupations, blockades and hard pickets were used by workers to fight back against aggressive depression-era employers. In 1936, women and men working at the Colonial Footwear Company in Toronto occupied their factory for two days to win a fellow worker’s job back. This was the first sit-down strike in Canada. Sit-down strikes spread across the country in 1937. The uptick in 1930s and especially in the 1940s brought renewed hostility from employers and the state. Strikes were violently repressed. But there were cracks in the armour: the increase in labour unrest eventually forced governments to adopt legal protections and a legal regime that sought to regulate rather than just repress union activity.

By the late 1940s the “Wagner Model” of labour relations was becoming the norm. Unions won legal recognition and dues check-off. Mass picketing, sympathy strikes, and strikes during the life of a contract still remained illegal, and many workers still did not have the legal right to strike.

Fighting the criminalization of labour

In the 1960s and 1970s many public sector unions began to organise and assert their rights in the workplace. This was often done in opposition to the law. In 1965, postal workers went on a wildcat strike in response to an imposed government wage settlement. Postal workers did not have the legal right to strike, but they did so anyway. The leadership of the two postal associations opposed the “illegal” strike, saying they had no mandate. The rank and file of the membership led the way. 80 percent of the members went on a wildcat strike, the striking members told the leadership to look out the window to see their mandate. The strike resulted in wage gains for the membership, transformed the associations into a union and ultimately won the codification of their right to strike under the law.

In late 1971 in the midst of a brutal five-month lockout of typographical workers at La Presse in Montreal, labour held a massive demonstration. In response, the local government with the backing of the provincial government passed an anti-demonstration bylaw, preventing demonstrations within 50 blocks of La Presse offices. More protests occurred and the police killed one protester. In April of the next year, over 200,000 Quebec public sector workers – as part of the Common Front – were on a general strike, defying injunctions. The government cracked down hard, with police arresting and jailing three of the top labour leaders in the province. The strike seemed to be crushed.

But when the government jailed the leaders, workers across the province walked off the job. The strike expanded and momentum was with the rank and file. The government was forced back from repression and eventually reached a deal with the unions.

The 1973 teachers’ strike in Ontario likewise showed the power of a militant rank and file. The Ontario Conservative government of Bill Davis in 1973 introduced legislation to take away the right to strike from teachers. On December 18, all Ontario’s teachers walked out of their classrooms in an “illegal” strike. Bill Davis was forced to abandon his legislation and the right to strike was preserved by teachers.

In 1986, angered by anti-worker legislation brought in by Brian Peckford’s Progressive Conservative government in Newfoundland and Labrador, 1,200 public sector workers with NAPE went on an “illegal” strike over pay parity. Injunctions and arrests of union leaders in the early days of the strike did not deter it. The heavy-handed government approach only helped to win popular support and spread the strike. In total, 5,500 workers in the province eventually were on an “illegal” strike. The strike was so massive that police stopped arresting picketers in order to not clog up the courts and jails. Workers eventually won pay increases and changes to the law.

It wasn’t just public sector workers who were striking in the 1960s and 1970s, it was all workers. The highest level of strike activity in the history of the labour movement occurred during this period and many of them were “illegal”. A wildcat shutdown Stelco in 1966, Bell faced a wildcat strike in 1971, and the 1974 steelworkers wildcat strike at Elliot Lake over health and safety resulted in the Occupational Health and Safety Act of 1979. Postal workers used local wildcat strikes repeatedly in the 70s and the union famously defied back to work legislation in 1978 with their national president going to jail. Fully one third of all strikes in the 1970s were “illegal”. The result of these strikes was not simply jail and fines. On balance, workers came out on top, winning improved working conditions and pay.

Even when they were defeated, in the long-term these “illegal” strikes had positive impacts for workers and unions. In 1981, 12,000 CUPE healthcare workers in Ontario went on strike against the wishes of their union and in defiance of the law. While they saw only minimal short-term gains, they ended up transforming their union and building collective power.

Despite a general assault on workers’ rights throughout the 1980s and 1990s workers did defy the law to stand up for their rights. In 1983, as part of the Solidarity movement, BC teachers and support staff walked out on an “illegal” strike in response to anti-union legislation by the government. In 1988, nurses in Alberta went on an “illegal” strike against a Conservative government and forced the government to back down on its concessionary offer. In 1995, 2,500 laundry workers, dieticians and other healthcare workers in Calgary walked out in a wildcat strike against Ralph Klein’s healthcare cuts. Their strike forced the government to back down on their most egregious cuts. In Ontario in response to Mike Harris’ cuts, CUPE childcare workers engaged in an “illegal” walkout and the teachers’ unions carried out a two-week “illegal” strike.

While the number of wildcat strikes is not what it once was, workers have still shown a willingness to defy the law in order to preserve their rights. In 2005, the BC teachers once again went on an “illegal” two-week strike against an imposed contract winning improvements from a very hostile Liberal government. In 2012, Air Canada airport ground crew in Toronto and Montreal went on a wildcat strike after the federal Conservatives pushed through legislation taking away their right to strike. In 2014, Nova Scotia nurses organized with NSGEU went on a one day wildcat strike against essential services legislation. And, in 2020, Alberta healthcare workers went on an “illegal” strike after Jason Kenney announced his government would cut 11,000 jobs in the sector.

The collective action of workers, not governments, has given us the right to strike. Our ability to collectively withdraw our labour is the cornerstone of so much that is good in our society. Strong public services, health and safety, employment standards, unemployment insurance, decent pay, human rights, protections for injured workers, and parental leave, all come from our ability as workers to collectively bargain and strike. When governments have aimed to curb or criminalize our rights, our best and only hope has been to defy these laws. Whatever the law says, it’s right to strike.