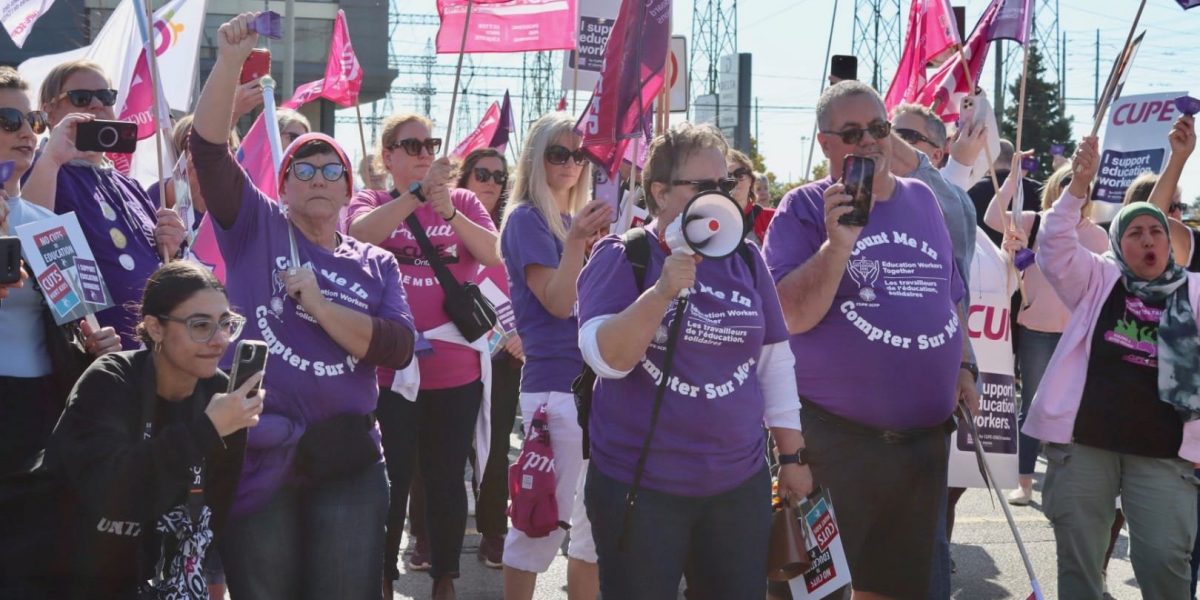 On Sunday, the Ontario School Board Council of Unions, representing 55,000 education workers in Ontario, issued their notice to strike on November 4. Hours later, Stephen Lecce, Ontario’s Minister of Education, announced that the Conservative government would introduce legislation to preemptively take away education workers’ right to strike.

The government is going to extreme lengths to attack the basic democratic right of free and fair collective bargaining.

The OSBCU has been very transparent in their bargaining demands, asking for a $3.25 an hour raise for its workers. The government negotiators walked out of bargaining and gave an offer they deemed “very generous,” which included the equivalent of a $0.40 to $0.67 raise, insufficient funding to sustain the benefits plan, a massive cut to sick leave/long term disability, no prep time for classroom workers, and decreased job security language. The contract Lecce will attempt to impose today raises the take-home hourly wage of an education worker making $43,000 a year by about 17 pennies an hour.

This deal would only make the existing problems facing our public education system worse. Understaffing and burnout of education workers that is already hitting our schools would only become more widespread. Since 2018, Ford’s Conservatives have cut funding for schools by $800 per student – the cuts totalled $1.6 billion in 2021-2022.

The direct cash payments to parents, the so-called catch-up payments, was a crass attempt by the government to win over parents during bargaining. It should have been money going into our public schools, not being taken out of them. In fact the money going to parents was framed as a way for parents to spend that money on private education services, which many have pointed to as part of a Ford strategy to slowly privatize education in Ontario. Thus it was no surprise to see the Halton District School Board send out a strike plan to parents which included keeping schools open with contracted out cleaning services.

The attack on education workers and the underfunding of our public schools by this government will negatively impact students and parents.

Teachers and other education unions challenged Bill 115 at the Ontario Superior Court of Justice. They argued that Bill 115 interfered with collective bargaining between unions and school boards and, as a result, violated the Canadian Charter of Rights and Freedoms

In 2016, Justice Thomas R. Lederer of the Ontario Superior Court of Justice agreed with the unions, and determined that Bill 115 interfered with the unions’ collective bargaining rights contrary to Section 2(d) of the Charter of Rights and Freedoms. The government was ordered to pay out damages of hundreds of millions of dollars to the affected workers, but this remedy won’t make up for the wages and benefits lost.

In 2019, the Ford government introduced and passed Bill 124, wage-suppression legislation that limits wage increases to a maximum of one percent total compensation for each of three years. The bill has had disastrous effects in the health care sector, where workers are barred from striking and have been forced to accept contracts from arbitrators bound by the Bill.

There is a gender-discrimination aspect of the Bill which has been used against health care and education workers, while the male-dominated firefighters and police officers are exempt. The Ontario Nurses Association and other unions have launched a Charter challenge that is working its way slowly through the courts.

The right to strike and defying

According to the Canadian Foundation for Labour Rights (CFLR), since 1982 federal and provincial governments in Canada passed more than 200 pieces of legislation that have limited, suspended or denied collective bargaining rights. This is a major attack on democracy and freedom and puts a downward pressure on wages and working conditions across society.

When bosses feel confident that they can get legislation to end strikes, there is no pressure for them to fairly negotiate with their employees. The threat of fines and punishment for the right to withhold labour means their is no force to counter the offensive from employers. When government’s can unilaterally impose contracts on public sector workers, there is no incentive to bargain in good faith.

However, it bears repeating that there is no such thing as illegal strikes, only unsuccessful ones. Anti-strike legislation can be defied but it requires workers to act confidently and collectively and expand the fight outside their own members.

How we can fight back

After the Ford government introduced the Keeping Students in Schools Act, CUPE announced education workers would organize a mass walkout on Friday in defiance of the legislation. This is a bold move by education workers in the fight for better working conditions. Workers risk fines and firings and union leaders risk jail.

There is much at stake and not just for education workers. This strike is about the working conditions of education workers, but it is also about the future of our public education system and upholding basic democratic rights to collectively bargain and to strike.

For workers to defy and win, it means causing a political crisis for the Conservatives centred around the cost of living and the future of Ontario’s schools and public services. This will require massive unity on the picket lines and in our communities.

Events are moving fast. If education workers are to succeed in their fight it will require a massive fight back from all unions and community members. Parents groups should be discussing the issues facing students and what we need to make public education decent for all students. It means passing motions of support in union locals, pressuring your local MPPs, discussing the issues and how to show support in your parent groups, and providing visible solidarity with education workers – painting the province purple.

There are a couple of key actions already outlined that we should be building. The first is the OFL emergency rally in defence of workers’ rights on Tuesday, November 1 at 5pm. The second is the Justice for Workers emergency phone zap for education workers on Wednesday, November 2 at 7pm. There will be more actions called and we should seize upon each every opportunity to widen the struggle.

This moment is key for the entire labour movement. Whatever industry you are in, the fight for education workers’ right to bargain and strike is essential to stopping the decades long rollbacks to worker wages and working conditions. We need workers’ power to defend and build the public services we want.