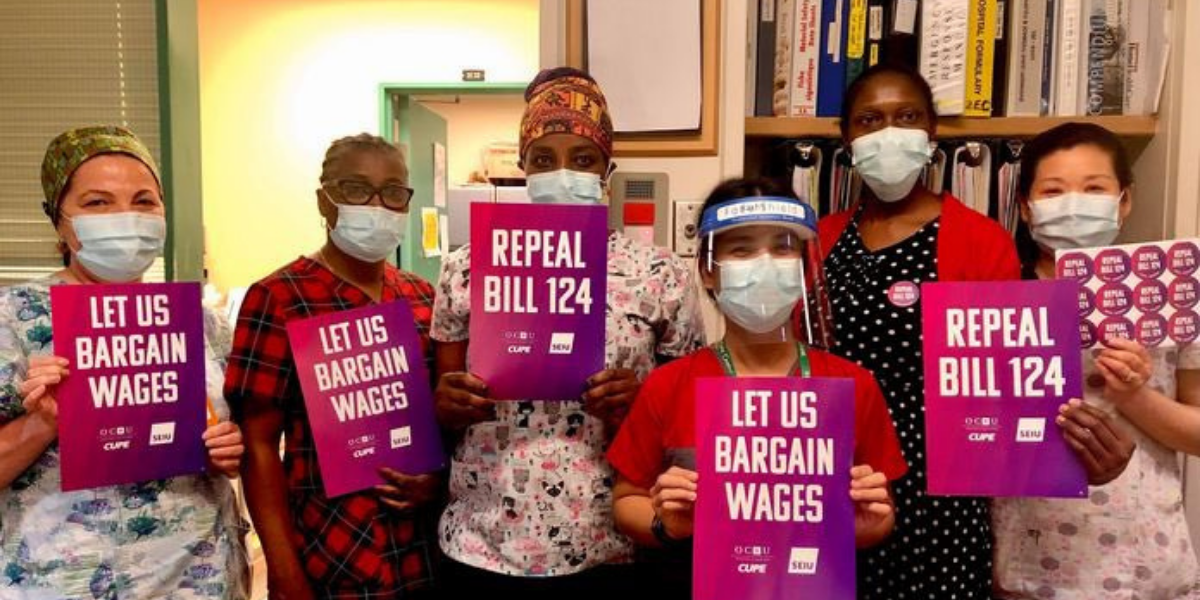 Ford’s Conservative government is desperately trying to make inroads with workers before the provincial election in June, attempting to convince voters that being forced to raise the minimum wage to $15 and pushing through toothless work-life balance legislation are evidence that he’s always been ‘for the little guy’. These overtures are not meant to bolster the power of workers. Instead, they are just window dressing for the election, meant to distract from the fact that his government has been waging a war against the working-class since he was first elected in 2018.

Bill 124, Protecting a Sustainable Public Sector for Future Generations Act, 2019, is a good example of this. This bill has been used to infringe on workers’ rights to collectively bargain by suppressing total compensation to a maximum of 1%. This means that as the costs of rent, food, and gas continue to rise, public sector workers, who are risking their lives working without sufficient PPE and ventilation, are being told that they need to swallow a pay cut as meager wage increases fall well below inflation. These frontline workers can’t even bargain for additional physiotherapy and counselling to try and cope with sky-high burnout and rising PTSD in the helping professions because these benefits are considered part of total compensation.

While unions have issued a Charter Challenge against the government because Bill 124 represents a direct attack on workers’ bargaining rights, this bill also needs to be thrown out on the grounds of exacerbating gendered inequities in the labour market. Those workers subject to Bill 124, including educators, hospital workers, PSWs, and Children’s Aid society staff, are more likely to be women because education and care work are female-dominated fields of employment.

Many of these women workers care for the public, whether it be providing medical aid to the sick, physical support to the elderly, or education to young people. Although this care work has always been essential, a number of these workers, including PSWs, Early Childhood Educators, and nutritional aids, tend to be viewed as low status and low skill workers who deserve far less compensation than any worker who carries a briefcase on Bay Street. Amongst these care workers, the lowest paid and most precariously employed are disproportionately racialized women.

Meanwhile, the pandemic has brutally ripped away the illusion that these jobs are unskilled or not essential. It is clear that our society can easily function without marketing consultants, corporate lawyers, and tax specialists, but it will remain in crisis without PSWs, ECEs, nurses and educators.

After more than two years of mishandling this public health crisis, Ford still hasn’t been able to figure out that prioritizing ‘making Ontario open for business’ over making hospitals, schools, and long-term care homes safe won’t stymie the transmissibility or lethality of the COVID-19 virus. Instead, he has decided to place profits above people, retaining his deep disdain for care work and care workers, even while PSWs, educators, and especially nurses retire or change professions en masse to escape their dystopian working conditions.

As Ford continues to offer up women care workers as sacrificial lambs to the Omicron virus, he has gone out of his way to protect policing services from the effects of Bill 124, explicitly noting within the bill that they are to be excluded from its provisions. Of course, Ford has not tried to hide his soft spot for the police, which he’s publicly gushed about after announcing that he would be providing an additional $25-million in funding to the Ontario Provincial Police, “You know, and everyone knows, I absolutely love our police officers.”

But for someone who claims to be so fiscally minded, Ford seems to have forgotten that the province spends nearly $1.2 billion on the OPP with most of this money paying for police salaries, which average $118,000 per officer. If Ford thought that he could ‘protect’ the public sector by reducing expenditures on worker salaries, shouldn’t he try to reduce the number of OPP officers sitting on the sunshine list, rather than go after PSWs who make an average of $22.69 an hour?

The selective effects of Bill 124 have less to do with Ford’s commitment to balancing the budget and more to do with his idolization of the thin blue line and an ideological commitment to attacking public sector workers. How else can we explain why police officers were purposefully excluded from taking a pay cut, while teachers, hospital staff, and PSWs, were classified as the unnecessary fat that the province needed to trim during a public health crisis?

Bill 124 must be challenged, and not just in the courts. If it is allowed to stand, Ford will continue to illegally infringe on public sector workers’ rights to collectively bargain, which disproportionately impacts women workers. The effects of Bill 124 will also degrade public sector capacities, further justifying the ongoing privatization of the sector. To prevent this from happening, Bill 124 needs to be repealed, workers must build the power to fight this unjust law in the here and now. We need to defeat Ford in the workplace and at the ballot box.