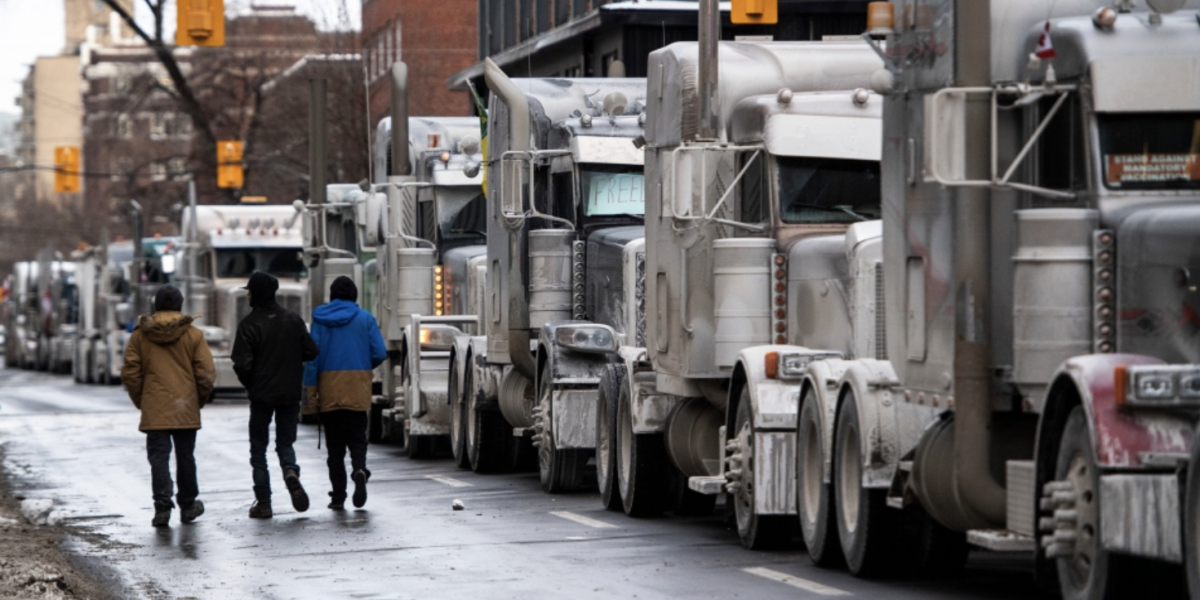 Facing a growing alt- and far-right in Canada fueled by two years of opposition to vaccines and public health mandates, the Left needs to critically assess the “freedom convoy,” and where to go from here.

The rise of Canada’s alt- and far-right

The so-called “freedom convoy” did not happen in a vacuum. As Todd Gordon writes, the resurgence of the far-right is not due strictly to the pandemic, but fits within a political economic context and recent crises of capitalism.

The pandemic added fuel to the fire of an already established Canadian alt- and far-right. Neoliberal responses to the pandemic have thrown countless people further into precarity as governments relied upon individual conduct (ex. mask wearing) while falling woefully short on social and economic needs including paid sick days for all, waiving of vaccine patents, significant improvements to public health and elder care, improved ventilation, and much more. This has been a deadly neoliberal pandemic response through-and-through.

It’s in this larger political economic context, and the neoliberal response to the pandemic, that large anti-vax/mandate protests snowballed over the course of two years, drawing an eclectic cross-section of people including wellness advocates, conspiracy theorists, regular people opposed to mandates, and elements of Canada’s established and growing alt- and far-right woven throughout. The “freedom convoy” was the culmination of this sustained mobilization in the streets over two pandemic years, and decades of neoliberalism.

It’s fair to regard the “freedom convoy” as a victory for the broad Right to and far-Right. The alt- and far-right has built organizational capacity while drawing a new wave of people to their ideas, networks, organizations, and actions. They shifted discourse and policy to the Right, watched as provinces dropped public health mandates like dominoes, and won other concessions. O’Toole was ousted during the convoy and the Conservatives literally welcomed the movement with open arms and timbits.

The Liberal resort to the Emergencies Act and its NDP support forcefully ended the convoy occupation, and the movement has since fizzled in the streets. The Emergencies Act emboldens sympathy for the convoy movement amongst its supporters, whose base will continue to network and organize with a new layer of support. Broader layers of the Left also embraced the police crackdown and even the Emergencies Act, despite the reality that coercive responses like these will be deployed with greater force and malice upon Indigenous, climate justice, socialist, and labour movements, pointing to the “freedom convoy” as justification. Doug Ford has already declared an intent to tighten laws against blockades, and we can expect further legislative tightening against dissent justified by the convoy.

Left organizing amidst the pandemic

Why has the Left not risen to the occasion during the pandemic to the same degree as the Right? Respecting physical distancing is not sufficient explanation, as rallies and actions can be held during the pandemic while mitigating public health concerns.

One reason is structural. From a height of strike activity in the 1970s-80s, strike action in Canada shrivelled through the 1990s into present day. Neoliberalism has fragmented the Left over decades, which remains weak relative to its historical peaks in the Canadian context.

A second reason is the Right had a focused campaign target (mandatory vaccines and health mandates) that they were able to mobilize around for a sustained period of time. Crucially, this campaign focused on deeply held values and notions of individual liberty and rights. Slogans like “freedom” and the Canadian flag are empty containers–colonial signifiers–in which anyone could throw their anxieties, fears, and anger – whether they be a working family worn down by neoliberalism or a wealthy business owner frustrated with mandates. The Left had no such focus or broad galvanizing force. The range of social challenges are simply overwhelming during the pandemic, and physical distancing further atomizes the Left. This is not to say the Left was absent or ineffective.

The murder of George Floyd triggerd a global wave of Black Lives Matter protest along with appeals to defund the police. In Canada, a high-point of organizing during the pandemic was the movement for paid sick days—both online, but also with rallies and a car caravan that surrounded Queen’s Park. This campaign showed the strength of effective pressure and mobilization—pushing the BC NDP to deliver five paid sick days and the federal Liberals to promise (but yet to deliver) 10 paid sick days. The increase of the minimum wage in Ontario was the result of effective long-term organizing, and migrant justice organizing also had high-points along with campaigns for workers’ rights, health and safety. Workers have won demands for employer-supplied N95 masks and greater protections. Networks have also evolved, as one prisoner justice organizer said organizing during the pandemic helped connect prison abolitionists across Canada better than before, with some tangible victories.

Nevertheless, none of this compared to the sustained focus and street-mobilization of the anti-vax/mandate movement. A lack of sustained on-the-ground movement organizing over two years has weakened the Left, and this partial political vacuum was seized by the Right. The “freedom convoy” is ample proof of what can happen in the absence of an organized Left. Judy Rebick and Corvin Russell did not mince their words: “This vacuum on the left – ranging from weakness to betrayal – is wind in the sails of those who wish to co-opt legitimate disaffection in service of a turn to authoritarian capitalism.”

If there is one silver lining from this awful “freedom convoy” movement, it is that the Left mobilized rallies, direct actions, and counter-protests. Following a large community rally in Ottawa, organizers then spearheaded blockades to stop cars from joining the convoy. The blockade snowballed as people with limited activist experience organically joined the action, and convoy car owners were compelled by blockade participants to remove flags and fuel cans in order to be permitted to leave in what is now called the Battle of Billings Bridge. “It is this sort of direct action, rather than policing emboldened by an authoritarian Emergencies Act, that will undermine sympathy for the convoy’s politics and win long-term support for a progressive agenda,” wrote organizer James Hutt following the action.

As convoy actions fanned out across the country, people organized to confront convoys with bikes, blockades, and rallies where politically and logistically possible, putting their bodies on the line in Vancouver and Toronto. Winnipeg showed up, and a small anti-capitalist counter-protest was organized in Montreal; medical professionals and community members organized rallies in Toronto. The convoy also put the reality of systemic racism in the national spotlight.  As Nora Loreto writes, the convoys were successful thanks in part to the police, who met these protests for weeks with “indifference and even support.” Even liberals were hard-pressed not to see the fact that this convoy movement was dealt with using kid-gloves relative to Indigenous, racialized, socialist, and climate justice actions.

What next for the Left?

This spring and the year ahead are absolutely critical for the Left in Québec and Canada. Steve D’Arcy wrote of how the Left cannot manufacture broad transformative struggles “by force of will or by sheer organizing prowess. It has to wait, more or less helplessly, for relevance to be thrust upon it by events.” It appears that this particular historical moment may be a key period of struggle for the Left that must be seized.

As Kim Moody writes in a fantastic piece, class struggle beckons the Left in 2022. “Amidst capitalism’s multiple crises—from slow growth to climate change to pandemic to supply chain breakdown—an unusually worker-friendly economic conjuncture has emerged, one unlike any seen for decades.” Workers and unions must take advantage of these conditions now as this opportunity will fade, he notes. “In a way, this is the first chance for this sort of intervention on a scale that can matter in a very long time and a potentially formative experience for a new generation of activists. It would be a political tragedy to miss this opportunity.”

A few key points of struggle and Left mobilization are vital in the Canadian context. The first is the necessity for mobilization around bold pandemic based-demands. There is no shortage of potential campaign issues from significant investment in public health after decades of neoliberalism, to overhauled and expanded long-term care and an end to privatization, significant investment in ventilation, and more. Indeed, a socialist version of the World Economic Forum’s “Great Reset” post-pandemic vision could be a mobilizing force, including the retrofitting of urban office space into green social and affordable housing to address both concerns of urban vitality and the acute housing crisis.

Critically, these demands need to be given life through sustained mass-movement organizing on the streets from the ground up with educational events, popular direct actions, mass movements, social events and more. The Left must intervene in pandemic politics with movements on the ground, not ceding this space any longer to the Right or supporting policing and emergency measures that will come back to haunt us.

A second major point of struggle must be that pandemic austerity and inflation are not offloaded onto working people, making those who suffered most pay for the crisis, but rather demanding that corporations that made enormous profits during the pandemic be tapped for the recovery effort. We can anticipate an uptick in labour action not seen for decades as workers demand that wages match the rate of inflation, at very least. Kim Moody identifies a range of priorities for socialists within the labour movement, including the need to build broad rank-and-file mass movements. The Ontario Federation of Labour’s March 6 activist assembly and May 1 day of action are inspiring models, particularly in the context of a provincial election.

Third, Indigenous-led movements must be central to all of this. It was fantastic to see Ottawa residents engage in direct actions to reclaim their city from the occupation, but the reality is the city has been occupied by colonial forces for hundreds of years. As a number of Indigenous organizers calmly said, “this is what it feels like to be occupied.” Exponentially multiply the traumatizing force of the convoy, and the police and state repression deployed upon the occupation, and expand that over hundreds of years, and Indigenous appeals for land back and reparations become painfully clear. The transformative potential of Indigenous-led social movements is enormous and must be supported.

Fourthly, the need for ongoing organizing against the far-right is also strikingly evident now. “Deplatforming by physically confronting the far right and fascists is an important tactic,” Todd Gordon writes. But as the Battle of Billings Bridge proves, “the most effective way to free public space of its odious presence is to build a broad movement able to retake the streets.” Brian McDougall shares insights into how post-convoy organizing is taking shape in Ottawa, with some promising efforts emerging including Community Solidarity Ottawa.

Lastly, the movement for climate justice grows with a sense of urgency each day.

There is no shortage of opportunities for the Left to mobilize. The five points of struggle identified above only scratch the surface. The priority must be to get involved in local infrastructures of dissent and organize. The next few years are likely to be vital for the Left in Canada and Québec. There is some reason for optimism heading into the spring, along with no shortage of uncertainty and challenge. Socialist organizers play a vital role in all of this, pushing for immediate reforms and victories with an intersectional lens and desire for a world beyond capitalism.