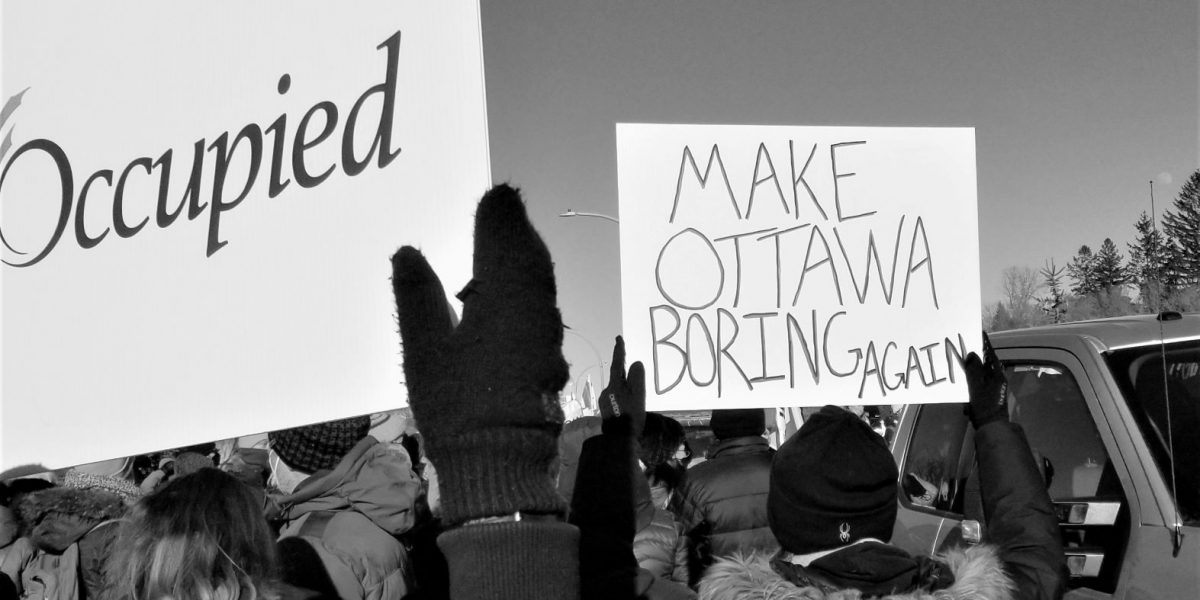 A report from an anonymous Ottawa resident

Ottawa has been occupied for the past 17 days by a convoy of anti-vaccine protestors who claim they represent truckers, regular people, the majority, etc. The overwhelming majority of the occupiers have no links to the trucking sector, and the movement is actually led by people who, to a person, have links with the far right in western Canada. Hard-core white supremacists are among their central cadre, as are a select handful of ex-police officers and former armed forces members. So, it’s a scary and motley bunch, but they’ve successfully used the dozens of big rigs that joined their convoy to blockade downtown Ottawa and entrench themselves right in front of Canada’s parliament buildings.

Police collusion with the convoy

The police have largely stood by and enabled, if not actually colluded with, the occupiers, who have been allowed to set up a bouncy castle, a stage with massive video projection screen, a beer tent, a DJ deck, and a hot tub in front of Parliament Hill. Residents in downtown Ottawa have been subject to hundreds of incidents of harassment, threats, intimidation, and physical assault and, of course, the burden of that has fallen disproportionately on people who are women, gay, transgender, and/or racialized. People have been living in fear.

The police’s friendly and enabling approach to the convoy has generated massive anger among Ottawa citizens, who have rightly pointed out the long history of police violence directed at Indigenous land back protesters, Black Lives Matter activists, and striking workers on picket lines. The anger is adding a renewed urgency to the demand to defund, dismantle, and disarm the police.

We have been told for 17 days straight, implicitly and explicitly, by all levels of government and established authority that we should stay in our homes, that we should avoid the downtown (approximately 50,000 people live in the downtown), that the police would do something substantive to move the vehicles and stop the daily harassment of residents.

After 17 days of this nonsense and inaction by the authorities, this weekend Ottawans themselves decided to change the conversation. Several thousand people came together yesterday to march through the neighbourhood directly south of downtown. I’m not certain how many people were there, but it occupied about five city blocks and four lanes of traffic. So, great, people finally felt they were at least registering that they live here and have some rights, too, and are tired of this bullshit. If that had been the only thing that we did this weekend, it still would have been a great step in opposing the convoy and building people’s confidence.

But a funny thing happened. That morning a group of dog-walkers and moms organized themselves on social media and then set up a blockade at Riverside and Bank Streets, one of the major routes into the parliamentary precinct from the main highway. It started with about 20 people before 9am, and by noon there were more than 200 people blocking a line of flag-flying pickup trucks that stretched back hundreds of metres. Many of the participants were white-haired seniors, and many of them were women. Another human blockade set up in front of police headquarters on Elgin Street, stopping traffic coming off the highway there.

I got to Riverside after 2pm and by then there were about a thousand of us blocking the road, swarming in amongst the stopped traffic, blasting dance music through a portable PA, and generally feeling like finally we were starting to take something back. I’m told that the police initially tried to negotiate with the blockade to allow the trucks to pass, and when nobody would budge, said to them: “If you don’t move, how does this end?” As you can imagine, after having gone through two and half weeks of far-right hooligans dug in on Parliament Hill, and literally everybody in the country asking that very question, this did not go over super well with my neighbours. Nobody budged and the crowd continued to swell as word spread.

I discovered afterwards that one of the leaders of the far-right occupation put out a call on his social media channels for reinforcements to come down to Riverside to try to open up a passage for the trucks, and that he drove down himself and did a slow-roll past the blockade. Not only did he lack the guts to get out of his vehicle, but not a single occupier answered his call, as far as I know. Certainly nothing got through the blockade the entire day, nor did anything get through on Elgin Street.

Sometime after 4pm, after being caught in the blockade for more than seven hours and with the sun starting to set, we began to allow the pickup trucks to leave one by one, on condition that they surrender their flags and jerry cans and remove the convoy decals from their vehicles. So each truck was stripped of its colours before being allowed to leave town. I’ve been reading various online comments made by some of those caught in our blockade, that it was the worst day of their lives and that they did not expect anything like this. As you can imagine, the comments being made by Ottawans themselves, that we have finally started to push these hate-mongers back and retake our streets, were of a wholly different character. The day was, in a word, fantastic.

Ottawa residents vs. the convoy

It would be difficult to overstate just how angry people here are about this occupation. It wouldn’t surprise me at all if something much more confrontational occurs in the coming days, initiated by Ottawa residents themselves. People are fed up, and the aura that has surrounded the occupation since it rolled into town has now been broken.

Occupiers beware, the dog-walkers and grannies are coming, and the vast majority of Ottawans are with them!

Get involved in the next action! Contact Community Solidarity Ottawa.