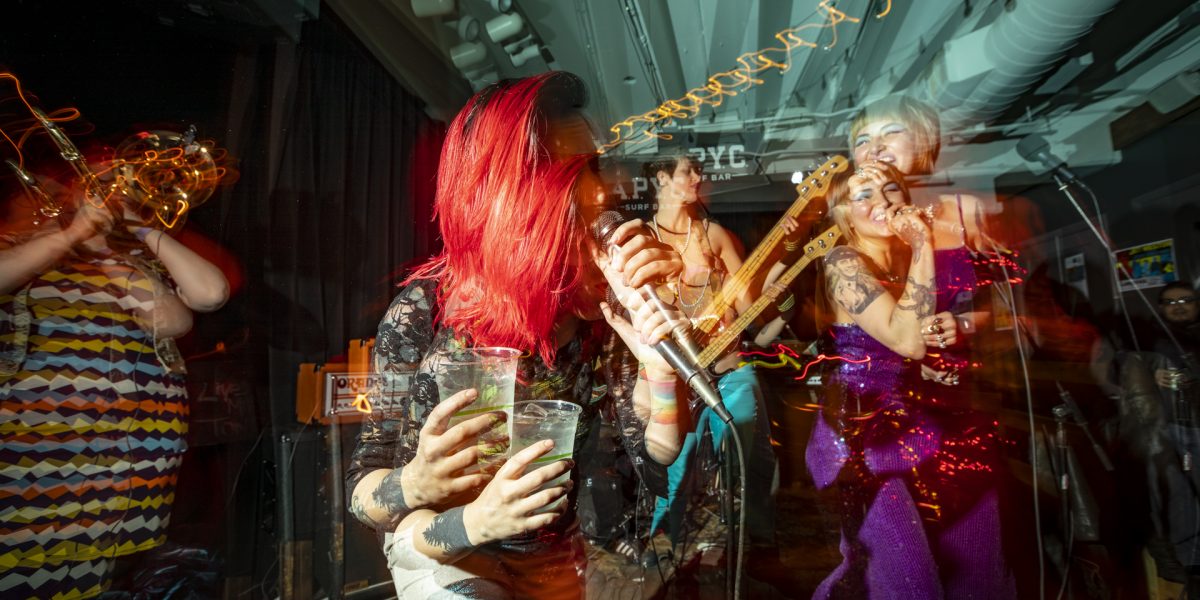 If there is a trend among the music I’ve listened to in 2020, it’s one that really emphasizes mutual aid and goes deep into the chaos and alienation that seems to have had some impact on all of us. From the continued climate crisis to the ongoing trod of neoliberalism and growing inequality, music in 2020 has been seeking to put a sound and voice to the variety of emotions and sense of loss we’ve been feeling, as well as consistently emphasizing the notion that, if we are to solve these conflicts, the solutions can’t come from capitalism. After all, it is the system that created and worsened these issues in the first place. The solutions we are consistently seeing, from rent strikes to frontline workers speaking out, are coming from us, the working class. Molly Rhythm is back with a new album, adding to the chorus of those fighting, singing and playing for a better world.

There aren’t really too many bands to which to compare Philadelphia’s Molly Rhythm, but maybe think of No Doubt forming a System of a Down cover band and dressing them up in wild colours and giving them an awesome energy. Sounds weird, but it works incredibly well. The same energy is also a key aspect of their live shows. The passion and energy presented on stage is addictive and makes them an incredible live act.

While the group is currently on hiatus, their brand new album is more than enough to tide fans over. Dark Matters is their latest release since 2014’s The Devil Never Comes. It takes the band’s signature sound and pushes it into 2020’s world of climate, economic, and personal crises.

When asked for information about the new album’s direction, co-lead vocalist Elissa Janelle Velveteen said, “We’ve been writing this album for a few years, and it deals with issues that have been occurring: capitalism, materialism, equality, the environment, women’s rights, and now that those issues are on our door, these are things that are relevant to the whole world for our whole life. Of course, these are things that concern us, and as Americans we feel responsible with our current political climate. It’s more direct now, but it’s something that has concerned us for a long time.” If you’ve ever wanted to mosh and dance around your living room while building a steady rage at the ruling class, I can’t think of a better release than Dark Matters.

After a prelude that sounds like it might be on Protest the Hero’s next album, we kick right into “This is Fracking Ridiculous.” With a start that sounds like it could be a cover of “Master of Puppets,” we get a heavy track about our dependence on an industry that is slowly killing the planet. “Here we stand on stolen land / pump that oil out the ground / Murder all that’s in your path / Burn your forests break your pacts.” The following track “Octopus Trap,” is another burner that really highlights the band’s two lead-vocalists, Nikki Nailbomb and Elissa Janelle Velveteen. Only three tracks in, the album has an incredibly progressive aspect about it: each track really builds off of the last, and it really reminds me of the type of story-telling and thematic structures usually reserved for concept albums from the 70s.

The next two tracks on the album are some heavy hitters. “Herd Mentality” has a dark, cabaret feel to it that really stands out. After covering a sonic cacophony of taglines and jeers, the track ends with the repeated line of “We’re so afraid, so afraid.” This headspace really sets you up for one of the album’s highlights, “Fossil Fools.” The track serves as the album’s lead single and is accompanied by a music video, shot at Montreal’s Pouzza Fest. The whole track is as sharp as a knife, and I could easily highlight and discuss each line. It covers so many intersectional ideas and struggles and really does a good job at highlighting the structural nature of our social and environmental destruction. I think this excerpt really says it best:

Why don’t you ask the last queen of Hawaii
What she thinks about your honeymoon in paradise
The holy lands for throwin’ trash
Were burnin’ gas and terrorizing
Mining, stealing resources
They keep us on our toes so we keep clocking in
They don’t want us to know
What we’re sustaining, who we’re enslaving

“Ghosts Laugh” and “Hunt” are a great pair. One is quieter interlude detailing personal struggle and growth, the other is the heaviest track on the album focused on the violence regarding losing our humanity and seeking visceral revenge. I’m not gonna lie to you, I might not put this track on before bed. The following two album closers are also great companion pieces. “A Hopeful Lament” follows up from “Ghost Laugh” thematically, and serves to connect our personal struggles to the social and global. It asks us to examine our own reservations and ideas and test them against what our actions provide in terms of making the world a better place or leading to its destruction. The album closes with “Epilogue.” It serves as a great… epilogue to the album, providing some depressive, pessimistic, but engrossing lyrics to focus on the state of the world.

It could be easy to see this record as one that’s telling us to give up, to simply give into the mess that has been made and focus only on the individual, but it’s in fact this cry and focus that asserts a message of action. As one of the lines in ‘Fracking’ goes: “Change isn’t easy, but I’d like to think we give a shit.” We’re not alone in this. We don’t have capitalism, we don’t have the system, but we have each other. It’s been made more than clear where our government’s priorities are, but working together we can achieve change. Working class actions are not only possible, they exist right now. We can work together in climate groups, tenant organizations, as well as frontline support and direct action. Dark Matters perfectly lays out two global options we can follow, and trusts us to make the right choice.

Dark Matters can be purchased on Bandcamp.