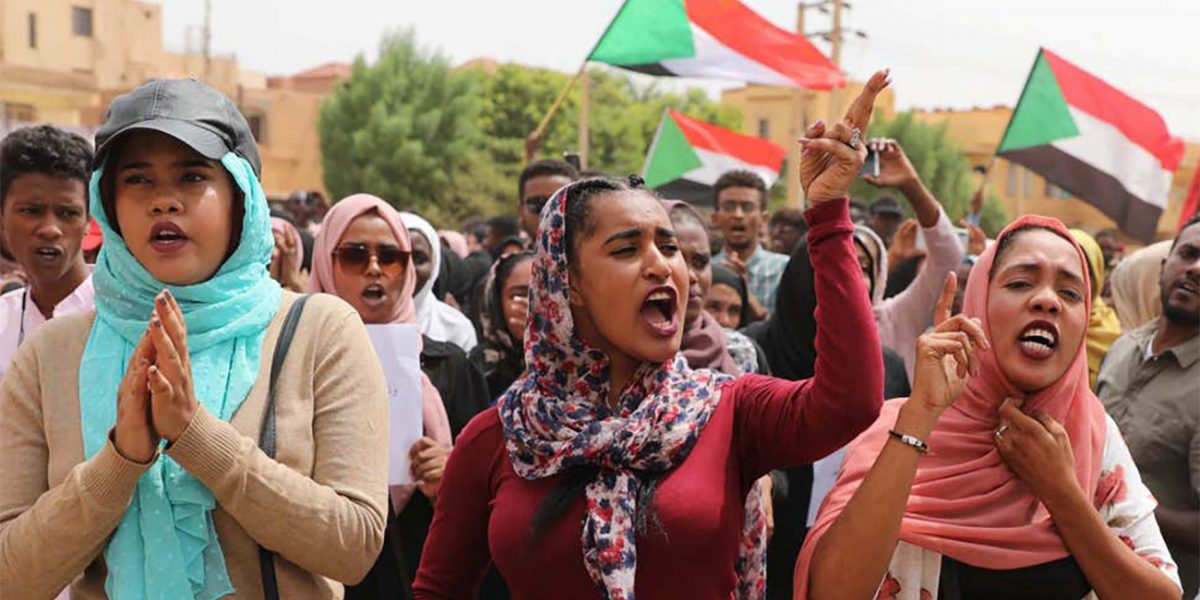 After overthrowing the 30-year dictatorship of Omar el-Bashir in April of this year, Sudanese protesters demanded, among other important changes, a transition to a democratic, civilian government.

In July protesters, political groups/parties, civil society groups and unions (particularly the Sudanese Professional Association) agreed to a deal with the Transitional Military Council (TMC, made up of supporters of Bashir). Formally adopted on August 17, the agreement calls for a three-year transition to a fully civilian government and investigation of the military’s human rights abuses  against protesters.

But it leaves considerable power with the military. For example, it will be a military representative that heads the Sovereign Council for the first 21 months and can veto the Council’s decisions. TMC members will retain control over the military and dangerous para-military apparatus (such as the Rapid Support Forces, aka Janjaweed). TMC members will also retrain control over foreign relations, an important consideration given the support for the TMC  by the repressive regimes of Saudi Arabia, Egypt and the United Arab Emirates – none of whom want to see democracy spreading to their own countries.

As Yousif Hassan, a Sudanese activist in Toronto, noted,

“While a prolonged general strike may have met more of our demands for peace, human rights, independent trade unions, etc., we have to deal now with the current arrangement. But it may just be a matter of time before the military shows its hand and then we will need another revolution…The protest movement has shown that most Sudanese prefer non-violent resistance, which makes the role of unions and of the local resistance committees very important in the next phase of the transition.”

The Sudanese community held a protest in Toronto on June 4, immediately following the June 3 massacre in Khartoum of over 100 protesters by the military. The community has gone on to create specific solidarity organizations including the Sudan Solidarity Network (SSN) and the Kandaka in White (KIW) Campaign.

Even before the SSN was formed, some of its founders organized a panel on June 15 at the University of Toronto that attracted hundreds of people. It featured speakers such as Nisrin Elamin (Stanford), Hhalid Medani (McGill), Janice Boddy (UofT) and Khalid Ahmed (UofT). Since then SSN has had two organizing meetings, attended primarily by Sudanese people, and made plans for awareness-raising, communications, and advocacy with politicians and others. It has already attracted some union endorsements.

As it states: “The Sudan Solidarity Network is a collective of people and organizations working with communities, civil society organizations, solidarity networks, labour unions and politicians to promote freedom, peace, and democracy in Sudan.”

The SSN will amplify the demands of the Sudanese people for: freedom and civilian rule; human rights; investigation of military abuses of protesters and the bringing of the guilty to justice; an end to European Union funding of militias (that have been used to both stop African migrants attempting to reach Europe, and to arrest, assault, rape and murder Sudanese protesters); a moratorium on any Canadian-based company (including Dickens & Madson Inc.) conducting business with the TMC or Rapid Support Forces (formerly known as Janjaweed).

The KIW campaign mirrors the centuries-old leadership role of Sudanese women in creating major social change. Many may have become familiar with Kandaka by seeing a photo of Alaa Salah, a protester who stood atop a car during the April 2019 protests and was dubbed “the Nubian queen.” While in no way diminishing her important role, it is key to recall the historic role women have often played throughout Sudanese history. “Kandaka” means “strong women” and the wearing of white “thobe” (like a sari) was popularized by women workers in Sudan.

In Ontario, KIW has already emerged in a leadership capacity with two recent actions. On June 18, the group mobilized members from across southern Ontario to Ottawa, where the women protested in front of the Saudia Arabia and United Arab Emirates embassies, to oppose the roles of those governments in supporting the military regime in Sudan. The group then marched to Parliament Hill to demand greater Canadian government involvement in demanding freedom, democracy and human rights for the Sudanese.

On August 10, KIW organized a workshop at the Workers’ Action Centre to create bonds between Sudanese survivors of sexual assault at the hands of the military and RSF (and local survivor support agencies), and Toronto sexual assault survivor counsellors. The meeting was viewed as just the beginning of the discussion, and featured speakers from Sudan (by Skype and phone) and Toronto. KIW stressed the importance of learning from the Sudanese survivors themselves as to what their needs are, with a particular focus on women living in outlying areas, where there are fewer services to assist them.

Non-Sudanese people need to support this revolution (and the one unfolding in Algeria) for many reasons. A victory for the Sudanese revolution will give confidence to people across the Middle East and North Africa, to break the shackles of their national governments, regional oppressors and imperialists from the US, Russia and China. Supporting revolution elsewhere, and learning its lessons (both positive and negative) helps strengthen our struggles here at home, where there are no shortage of crises posed by capitalism (austerity, inequality, oppression of all kinds).