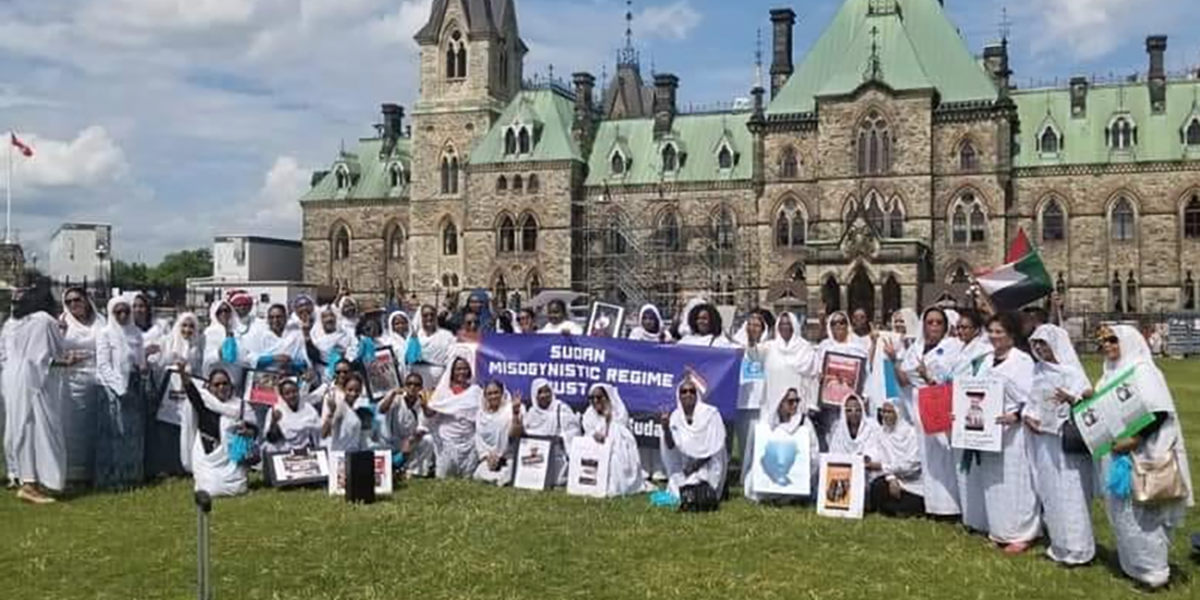 Sudanese women’s groups around the world have been putting pressure on their governments in the diaspora to call for justice for protesters in Sudan. Spring Magazine’s Valerie Lannon interviewed Elham Bakri and Ola Adam about the Sudanese revolution and the central role of women, and was invited to join the June 19 day of action in Ottawa. This is her report.

Ten Sudanese women took part in a meeting with senior officials from the Ministry of Foreign Affairs. On June 6, the Canadian government had issued a condemnation of the June 4 massacre of over a hundred protesters in Sudan by the Rapid Security Forces (formerly known as Janjaweed), plus many more injuries and rapes. I was not part of the meeting but was told that the Ministry staff with whom the women met were apparently supportive of their cause—namely to demand fully civilian, not military, rule and the investigation for war crimes of those responsible for the killing, rapes, torture and other abuse of protesters in Sudan.  As campaigner Elham Bakri stated,

“The women also tabled a demand that the Canadian government stop selling weapons to the parties or countries that would use them against our people or any other nation in their struggle against dictatorship.”

But there were no politicians present, so it remains to be seen how influential the views of staff will be in getting Liberal Members of Parliament to push harder for pressure for investigations and justice.

In addition to the meeting with government officials, the women wanted to clearly protest the role of neighbouring countries in supporting the current military regime, i.e. Saudi Arabia, United Arab Emirates (UAE) and Egypt. The women decided to protest by the embassies of Saudi Arabia and UAE, and then march to Parliament Hill. They marched behind the banner, “Sudan Misogynistic Regime Must Go! Stop Women Torture in Sudan!”

Women arrived in Ottawa by train, bus and cars, from as far away as London, Niagara Falls, Kitchener and Toronto, to add to the local women’s group. The women wore the traditional white robe—thobe—in solidarity with their sisters in Sudan.

A number of mothers brought their pre-school children with them, which added to the mood of determination mingled with joy.  Everyone helped keep the children from getting bored, though they seemed quite entertained by the marching and chanting all along the route.

The energy was amazing and the women were defiant and proud. Here are some of their chants:

The original intent was to present a letter to the Saudi Arabian ambassador; however, this was refused and the protest had to take place across the street from the embassy. There was a heavy RCMP presence with about five police cruisers in the vicinity.

Thirty women were supported by two men who live-filmed the event and sent it to Al Jazeera. We were told that a meeting in Sudan of the Sudanese Professional Association, the leading organization in the broad alliance of protesters, paused their meeting to follow the Al Jazeera coverage and appreciate the solidarity from abroad.

We had to wait awhile for the bus from Toronto to arrive, but didn’t stop chanting and filming the whole time. There were loads of placards (see photos) which included depictions of the military violence in Sudan and demands for change. By this time, the Ottawa CBC and Al Jazeera had arrived to film the event.

The area on Sussex Drive on which the embassy was located does not have a lot of pedestrian traffic, but a few people were on the sidewalks around lunch time. So I passed out an informational supplement by Spring Magazine (with the interview with Sudanese activists) to explain what was happening. We were not allowed to go on the sidewalk in front of the embassy, so just went down to the intersection nearby.

We then walked around the corner to the UAE embassy and continued chanting. A neighbor came out and expressed his sympathy, as well as his contempt for the hypocrisy of the Canadian government with regard to Saudi Arabia, i.e. condemning the massacre while selling military vehicles to the regime.

The women then marched to Parliament Hill, about a mile away. The weather was sunny and warm. By the time we assembled on Parliament Hill there were about 100 people; we had been joined by local supporters. The group was still primarily Sudanese but we were seeing some non-Sudanese and non-African Ottawa residents taking part.

It was hoped that Liberal MP Chandra Arya (Nepean riding) would address the crowd, but he did not show up. This is the last week that Parliament is sitting before summer recess, but the women hope that in the future more politicians will make themselves available.

After stopping for refreshments, we left Ottawa by bus in the evening. There were around 30 women and the energy remained high the whole time—especially after a coffee break, when singing and dancing to revolutionary songs, old and new, erupted.  My bus mate, Elham Bakri, told me there was a huge outburst of new music when the protests first emerged in Sudan in December of last year. One of the women on the bus is a DJ and had a great collection of music.

Plans are underway internationally for continuing days of action in solidarity with the protests in Sudan. With a world-wide diaspora of six million, there will be many actions! The next one in Toronto will be held June 30.  Please stay informed and support these women and all Sudanese who support the protests; go to the Facebook page Kandaka in White to learn how you can help.