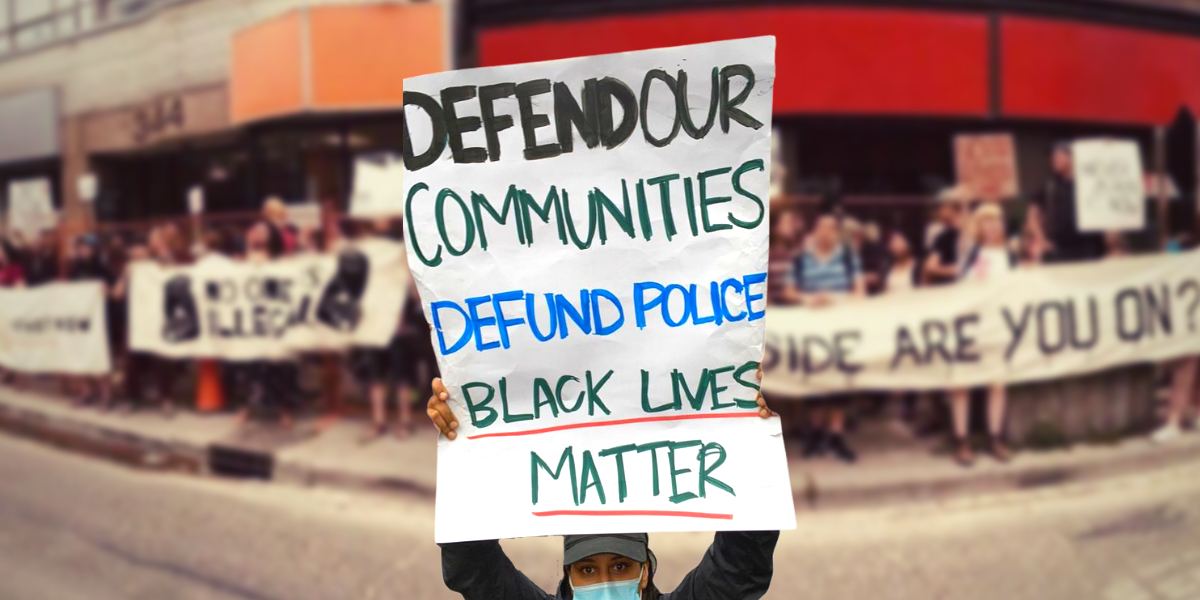 To better understand the Defund Toronto Police Services campaign of Showing Up for Racial Justice (SURJ)-Toronto, Spring Magazine interviewed Maya Kantharupan, a mobilizer involved in the campaign. SURJ is a US-based organization that originated in response to the Trump presidency and more public and visible display of white supremacy. One of SURJ’s goals is to organize more white people to be involved in the racial justice movement. SURJ-Toronto is the first and, so far, only chapter right now in the Canadian state. SURJ-Toronto launched its Defund Toronto Police Services campaign in December 2020 in the lead-up to the vote for the City of Toronto’s budget, which would be passed on February 18, 2021. With only a few months to mobilize, SURJ-Toronto built a strong base of mobilizers like Maya who conducted a variety of tactics to educate and advocate for change at the municipal level.

What are the campaign’s key demands?

The main goal of the campaign was to defund the Toronto Police Services budget by 50%, and have that money be reallocated to public community supports and services to meet the needs of racialized folks in the city. The strategy was focused on mobilizing the community, conducting education, and applying political pressure to get a councillor to bring a motion forward to that effect for the city’s 2021 budget. Black Lives Matter (BLM) Toronto came up with the original demand of the 50% figure and SURJ wanted to support and amplify that demand.

The central components of the campaign were and still are:

SURJ is not there to duplicate anyone, so we strategize about how to amplify existing messages from BIPOC-led organizations and other movement partners that trust us.

What are the campaign’s strategies for change, including work with other organizations?

The main strategy of the campaign was to build broad, public resistance to the massive police intrusion, and put pressure on Council. There was a 10% budget reduction motion by two councillors last year and although that failed this laid the groundwork for many conversation starters. Although mobilizers and SURJ-Toronto were uncertain the 50% demand would pass, it felt important to keep that demand because it made some kind of statement. However, afterwards I realized that there was very little follow-up, even from vocal councillors, so the campaign mobilizers had to do a lot of starting over even with “progressives”. This was a big learning for us, so we do not let the pressure up.

SURJ-Toronto is beginning to plan phase two and a big piece will be how to keep the momentum going. The original police budget passed, which is a problem because there was 0% increase on the total city budget and the police got their money even though there are big shortfalls for housing. The question for me now, is how do we get councillors to be leaders and get constituents to be confident? How do we talk about community safety and the police? One thing that the SURJ-Toronto Kids and Families team did was organize a facilitated arts workshop to talk with kids grade 4 and up about what community safety could look like, and how to imagine a world without police. The team developed a zine based on that discussion. You can view it at https://surjtoronto.com/kids4defunding

SURJ organized weekly phone zaps from December to February. The first 20 minutes was training on the issues of the campaign for those who needed or wanted it. We had script templates and after training would send participants off for 30 minutes to phone or email the mayor and council. Then we calculated the numbers.

In total there were nine phone zaps in, with 1500 phone calls and over 5100 emails sent to councillors! This was in addition to work being done by other organizations, like defund.ca, which garnered tens of thousands of emails. It’s amazing to see more and more people show up and more and more people returning e.g. 40-50 people, who also wanted to strategize more. It showed me what’s possible and we didn’t feel so helpless.

We encourage people to get involved with SURJ or their own wards. The campaign used a “snowflake” model, with a central hub but autonomy for local groups/wards. Different groups did posters, flyer drops, deputations, attended town halls, met with individual council members, and did business outreach. So there were and are lots of opportunities for people to get involved in different ways.

For me, phase two of the campaign is needed because it is clear that many people are interested in getting involved. Many other mobilizers mentioned joining the campaign after SURJ-Toronto held a webinar—featuring speakers like Desmond Cole, Idil Abdillahi, and people from Jane and Finch Action Against poverty—who spoke about the many entanglements of policing. The SURJ planning team is also taking the time to acknowledge that burn-out is real and occasional rest is needed. We need to be in this for the long haul, so we are trying to figure out a long-term, sustainable strategy. It’s like the “staggered breath” in a choir, so not everyone has to sing the whole time.

We also need to remember that disagreements about strategy or tactics are an opportunity to show up for your community. They allow you to accept perceived losses—because at the end of the day, winning and losing is a very colonial and capitalist mindset that keeps us from recognizing and pursuing progress.

SURJ always checked campaign demands, processes, and scripts with movement partners to make sure we’re considering everything and not duplicating. A lot of inspiration comes from movement partners who do such a good job talking about policing and the whole capitalist system and how it’s entangled everywhere, e.g. in fights for fair wages, paid sick days, funding education, climate change—they all intersect somewhere.

Generally how would you assess the campaign’s strengths and challenges?

In addition to what I’ve just described, I would point out that the campaign organizers and SURJ members helped create the campaign plan. We are well-organized, and our capacity to learn has grown e.g. to understand how council and communities function. The organizers gave us things to do, but also asked us what we wanted to do so we could particulate as fully as we wanted e.g. I learned how to give a land acknowledgement, how to facilitate meetings.

We all set a good tone, amplified a great message and put councillors on notice. It was great to see councillor Mike Layton put forth a motion to investigate ways to rely on Toronto Police Services less, and later sent out a newsletter that echoed some of our language around defunding and it mentioned BLM-Toronto and that a 50% reduction is the goal.

We heard councillor Joe Cressy give an impassioned speech on privilege. And, very importantly, we have been seeing conservative councillors expose their real politics, like how “winterizing public bathrooms will bring encampments”, “defund police means we like gangs roaming around”. These statements actually helped our cause as it shows how close to the surface these negative attitudes are.

But we have some disappointment in progressive councillors and are demanding they do more. The campaign also showed us where more public education is needed, where councillors need to be more vocal, and how to strengthen campaign connections in the wards.

How can people get involved?

To start with, people can learn more about the campaign on the SURJ website (surjtoronto.com) and defund.ca. You can also review messaging, the scripts and other good resources that are on the sites. Anyone can sign up to get involved on the website and there is an onboarding for the campaign.

Once you’re confident, then help to push the message, and there are lots of ways to do this.

Having conversations in your inner circles, even getting the language and learning what it means to you and where you can tap into the movement. Find the thing you’re passionate about because all issues are related e.g. demanding more funding for things like housing, which we can achieve if we reduce the police budget. Start to figure out yourself and what is of interest to you, so you bring passion to your work.

Phase Two of the Defund campaign will start at the end of March, so follow SURJ-Toronto on Facebook and Instagram. Get involved in your communities, reach out to your city councillor. This might be scary, so start with a phone zap with us, to build your confidence. If you’re outside Toronto you can still join phone zaps, or consider organizing your own.

Finally, don’t worry too much about what you’re doing or where you’re doing it, or getting overwhelmed with the number of issues. We just need to try and fail more, and get uncomfortable and move past it, so the work is not so overwhelming. It’s so rewarding.