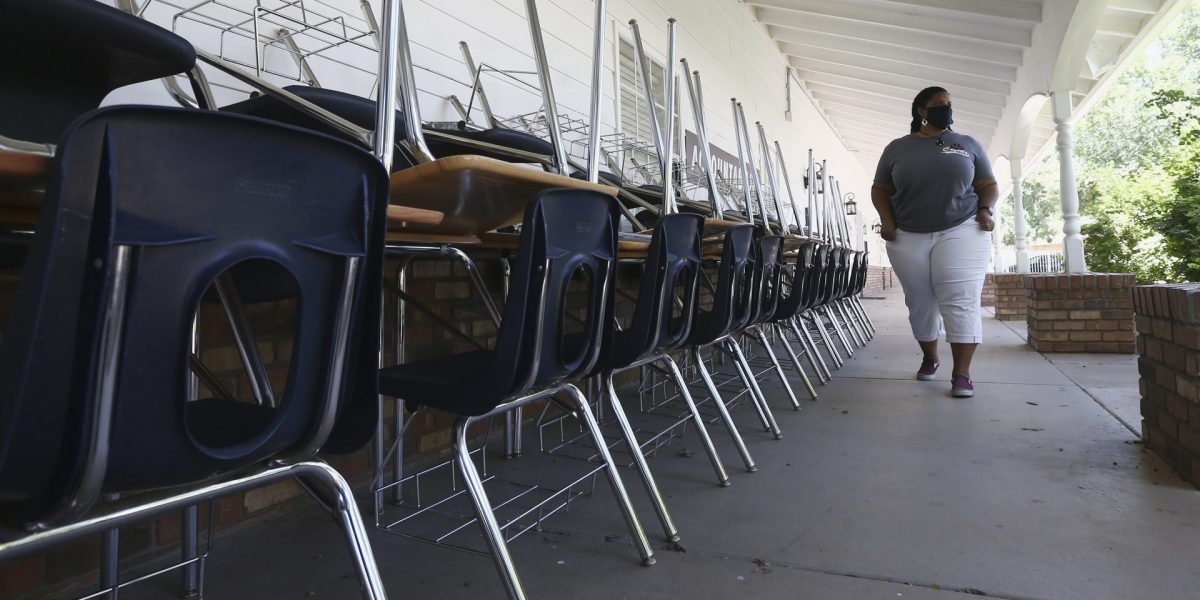 The Ontario government revealed its plan for reopening schools on July 30. The plan promises school boards an extra $309 million in targeted funding and will see elementary students back in class full-time and secondary school students back on a rotating schedule alternating a week of online learning with a week in-person.

Over the summer, school boards submitted reopening plans to the Ford government, including an online learning only plan, a plan for a hybrid model with children attending classes in-person on alternating days or weeks and a plan for the full time resumption of in-person classes. Initially, the provincial government said it would be up to individual school boards to pick which plan would work for them based on community COVID risks. But the July 30 announcement makes it clear that the government wants a return to full-time in-person instruction province-wide.

The government’s pressure to return to “normal” mirrors the pressure coming from the business community and the opinion pages of major media outlets to reopen schools so that the economy can reopen. As rank-and-file teacher activist Harley Litzelman wrote in his article Teachers: Refuse to Return to Campus, the Economist and other media outlets have made it clear that “schools are daytime storage for the children of workers.”

Pure and simple, the drive to reopen schools is based on profits not public health. As long as the schools stay closed, it will be impossible to reopen the economy. With the federal government predicting a 6.8% drop in GDP, the highest since the Great Depression, the pressure to get people off of the Canada Emergency Response Benefit (CERB) and to fully reopen schools and the economy trumps health concerns. Even as schools across the world have had to close again after experiencing spikes in cases almost immediately after reopening.

Understandably, teacher meme pages and discussion forums are filled with teachers expressing their anger and anxiety for being sent back to work in crowded classrooms with poor ventilation, by a government whose first priority once elected was making cuts to public education and workplace safety. Teachers are passionate about supporting their students and anyone will tell you that online teaching is far harder and less-enjoyable than teaching in-person. But we are in the midst of a global pandemic that has many rightfully fearful of their health and the health of their families.

“For the two million students, two hundred thousand staff, and their families and communities, the reality of school reopening is becoming an incredibly stressful issue. People are afraid to go to school, afraid that they will get sick and die,” Laura McCoy, an elementary school teacher in Ontario, said in a news release.

The government has promised “extra resources and training” for reopening, but the Ontario Parent Action Network has pointed out that the Ford government’s initial plan allocated an extra $25 million for improved technology and $4 million for enhanced school cleaning, working out to $.07/day per student. A far cry from the $3.2 billion dollars or $8.25/day per student reported by The Toronto Star as necessary to “hire more teachers and custodians, as well as purchase enough cleaning supplies and personal protective equipment” to safely reopen schools. Even the July 30 announcement of $309 million amounts to only 10% of the funds needed for full protection and does nothing to reduce class sizes.

Parents and teachers clearly have a common interest in safe schools, so the drive to reopen the economy and reopen schools is accompanied by the drive to reopen divisions. Two groups called heroes only a few short months ago are being blamed and pitted against one another: parents forced to work and provide child care through the quarantine are eager for schools to reopen while teachers are anxious about a return to unsafe working conditions. Rather than extending CERB and providing safe schools and workplaces for all, the federal government is ending CERB and provincial governments are not legislating employer-paid sick days. The mainstream press is turning heroes back into lazy workers and greedy teachers.

The actions organized around the province for a #SafeSeptember have raised a public conversation about what is necessary for a return to schools if we are serious about decreasing community spread of COVID-19 and keeping students, teachers and their families safe.

The Ontario Parent Action Network, Ontario Families for Public Education and Ontario Education Workers United’s joint list of demands unites, parents and community. The demands include smaller class sizes and before/after school child care; safer buildings with PPE and increased funding for health including free food programs and public health nurses; increased learning supports and anti-racism, including police-free schools and decolonized curriculum; a ban on evictions and additional funding to support those facing systemic barriers; and worker protections including 21 paid sick days and status for all workers, including parents and caregivers.

Fully 98 percent of teachers surveyed said they are concerned a lack of paid sick days will force parents to send their sick children to school due to a lack of available childcare options. Important for breaking down divisions between parents and teachers is the call for 21 paid sick days for all workers. Furthermore, while many might not realize it, there are educators in private schools, Montessori schools and daycares that have no access to paid sick days and would benefit from the government making employers pay their workers to stay home when sick.

Without providing proper paid sick leave for workers, socially isolating is impossible when the choice is between stopping the spread and paying the bills. The Sick Kids recommendations for a return to school, so often cited by the government, emphasizes that: “parents and caregivers need to be empowered by their employers to take paid sick days and/or work remotely if their children are not able to attend school.”

Paid sick days for all is about equity

Winning paid sick days for all workers could be a significant step toward making Black lives matter at work, where Black workers are disproportionately concentrated in low-wage, dangerous jobs. When San Francisco mandated paid sick days, it disproportionately benefited Black and Latinx workers and women, and was especially important for workers with chronic health issues and single mothers. Paid sick days are essential for all workers, not just those in schools, if we want to stop a spike in COVID-19 cases. Winning 21 paid sick days would mean that parents and teachers could stay home if they have symptoms, and keep sick students at home. This is especially important for workers, parents and children who are immunocompromised or have chronic physical or mental health issues.

The drive to reopen the economy is the drive of the capitalist class to return to business as usual and maximize profits. That drive puts profits before people’s health and turns from calling frontline workers heroes to cutting their pay and forcing them to work in unsafe conditions. The fight for safer schools has to include the fight for paid sick days for all workers and a fight against racism in schools and workplaces.

On July 20, the Strike for Black Lives saw participation from thousands of workers in 200 cities in the US. Nurses, janitors, fast food workers and others demanding an end to systemic racism in healthcare and workplaces, union recognition and decent wages. While far from what is necessary to win those demands, these walkouts point towards the important role that economic disruption will have to play in winning safer schools and a more equitable society. The announcement from the American Federation of Teachers, a union that represents 1.7 million school employees, that they will support members who strike against unsafe working conditions is a great development.