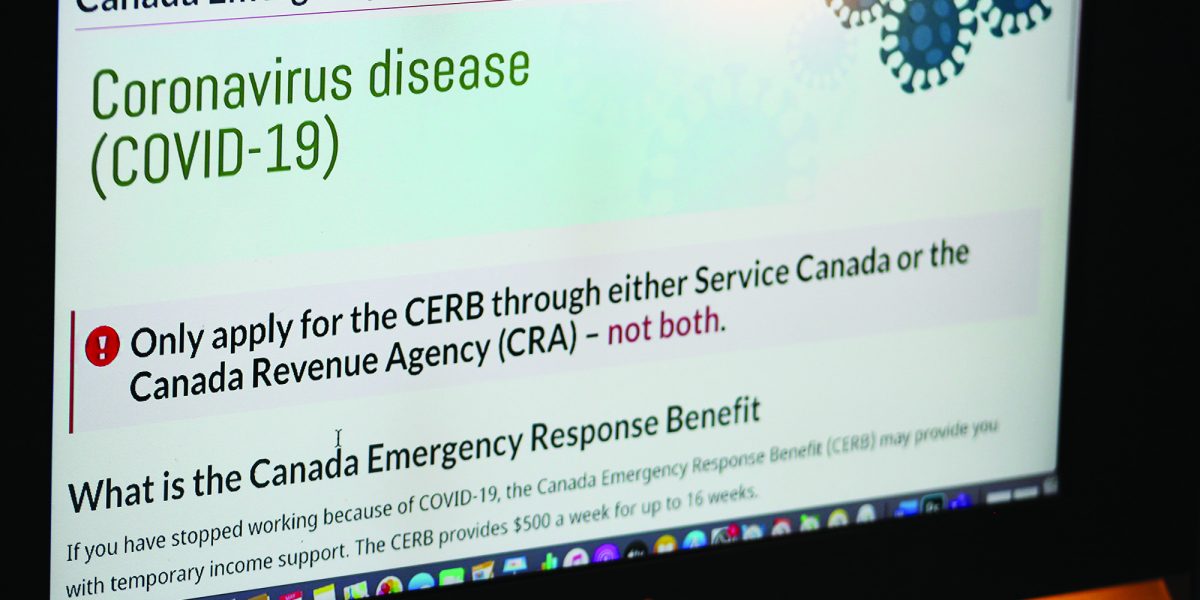 Roger, aged 39, was beginning a two-week gig as a lighting director for a conference held in Florida in early March. Shortly after he arrived, he noticed that firms involved in coordinating the event were packing up. “These companies just don’t pull out of events at the last minute unless they have to.” Then it was announced that the conference was cancelled. Governments in both the United States and Canada were beginning to shut down non-essential businesses in response to COVID. He flew home to Toronto.

As a freelancer, Roger depends on bookings to make a living. After the shutdown, all of the events he was scheduled to work were cancelled, and he was left without any income for the foreseeable future.

The shutdowns have resulted in near unprecedented unemployment levels, and a major economic downturn in Canada. In response, the federal Liberal government implemented several emergency relief funds, including the Canadian Emergency Response Benefit.

I’ve previously written on the pre-existing research on the relationship between economic recessions and mental health, and the role that unemployment protection programs can play in preventing mental health crises.

I’ve since spoken with several workers who have been impacted the shutdown in order to understand what the shutdown has meant on a personal level. I asked them about their experiences of shutdown, how government assistance impacted them and what they anticipate for the future.

The stress of the shutdown

Francie, who lives in Halifax and who works in an office position for a private school, was one of the many Canadians who started to work from home during the shutdowns. “I went into the office one day a week and worked from home on the remaining days.”

A month later Francie, aged 58, was laid-off. “There just wasn’t enough work and so they let go of one person in each department. I was that person in my department.” The lay-off is still considered temporary, but Francie may be facing a permanent lay-off depending on the school’s enrolment come September. “It’s been stressful. All the insecurities float to the top. I ask myself, ‘Why me?’”

She said that she feels like she wasn’t of value. “The feelings were especially heavy in the beginning, and I’ve worked through them over time.”

According to a survey by the Centre for Addiction and Mental Health, Francie is one of many Canadians experiencing an increase in anxiety during the pandemic, numbers are highest for those who have lost their job, and for individuals concerned about their finances.

For Roger it wasn’t the loss of work that most impacted his mood. “My work is more seasonal. I’m used to slow periods, but not when I can’t leave the house. I missed the feeling of accidental encounters – like running into someone I know while running errands.”

Both Francie and Roger applied for and received CERB.

“The process was quite easy,” Francie said. “I filed on Thursday, and by Tuesday $2000 was deposited into my account.” She felt relief that she had a little extra security and could continue her mortgage payments. “It was one less thing that I had to worry about.”

Roger said, “It meant I could pay my rent and groceries without family support or selling off my equipment. It was one less thing that I had to worry about.” He agreed that, were it not for CERB, his mood would have been more negatively affected by the shutdown.

There are, of course, limits to the impact of government assistance.

CERB is tied to unemployment due to the shutdown and therefore unavailable for those who were already unemployed. In April, the Canadian Centre for Policy Alternatives estimated that 1.4 million unemployed Canadians did receive any financial assistance. It’s also not available to all waged workers: including undocumented workers and those paid under the table.

It also has no benefit for individuals already hardest hit by the economy: including those experiencing homelessness or impacted by the opioid crisis. As Matthew Hayes has argued, CERB mostly benefits the landlords and financial institutions who continue to receive payments on rent, mortgage and debt payments.

Finally, Roger pointed out, financial security is not the only issue affecting their mental health during a pandemic. “CERB didn’t fix the social isolation I felt.”

Shutting off the tap too soon

Despite the limits of the federal government’s response, federal programs like the CERB have prevented crises for many Canadians, and the programs are also popular. One poll conducted by Global News and Ipsos found that 86% of respondents approved of CERB.

The poll also found that, “Half of [respondents] believe CERB should be winding down at the soonest possible opportunity”. It’s a sentiment echoed by the Conservative party, which has proposed to incentivize returning to work.

However, ending the program sooner rather than later won’t resolve the crisis of under- and unemployment facing Canada, and recent international examples demonstrate that re-opening comes with the risk of another rise in infections. Ending government assistance would only put workers in a position of choosing to either risk infection or to be left unable to afford essentials. Against the backdrop of social isolation and mental distress that has characterized this lockdown, the last thing workers need is to worry about their finances.

Both workers that I spoke with expressed anxiety over the future. Francie was waiting to hear about whether her job would resume, but she has hesitations about going back. “My husband has COPD, and my lung capacity is limited due to previous radiation for breast cancer. It makes me nervous to think that I might become infected.”

Roger worries less for himself than others he works with. “People don’t realize how many people in the events industry are impacted by this and how slow the recovery will be. There are many people with mental illness and addiction at the best of time and ending the support before work picks up will only accelerate the crisis that already existed.”

Note: both interviewees were given aliases for this piece.

Fill out this confidential Workers’ Action Centre survey about CERB and what a safe return to work means to you.