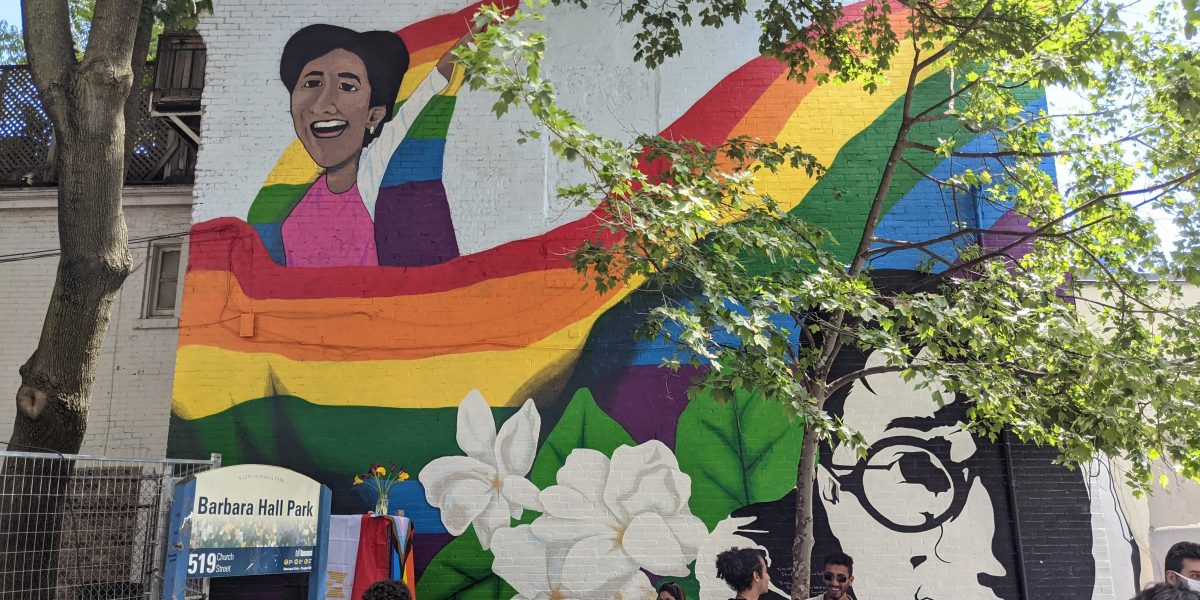 Sarah Hegazi was a queer Egyptian revolutionary socialist (with the Bread and Freedom party) who was made a political prisoner by the Sisi regime in 2017 after waving the rainbow flag at a concert by a Lebanese band that featured an openly gay singer. Following months of isolation and torture Hegazi obtained political refugee status in Canada and moved to Toronto in 2018. She was active in campaigns for decent work, for LGBTQ+ rights, and for human rights everywhere especially the Middle East and North Africa. She took part in protests against war (when Trump threatened to invade Iran), and actively supported the 2019 downfall of the Bashir dictatorship with Sudanese comrades in Toronto. She was a member of the Spring Socialist Network.

The trauma from prison and the alienating experience of life as a political refugee, combined with the inadequacy of mental health services here, led to 30-year old Sarah taking her own life in June 2020. For the first anniversary of her death, Toronto activists organized the painting of a mural in her honour, which was officially opened on June 12. The mural is located on a wall at 511 Church Street, in Toronto’s gay Village in the Church-Wellesley area, adjacent to the popular 519 community centre.

Where did the idea for the mural come from?

Keitha: Alaa came to me and gave me the background for Sarah and I agreed right away. I’ve done murals before about emotionally heavy subjects. You have to take care of your spirit while you’re doing these things, and be able to deal with ideas coming into your head. That’s why I agreed to do it, because I knew I could handle it. We discussed the rainbow flag (carried by Sarah at the concert in Egypt) and knew we wanted it to be prominent. I did a few designs, first without the flag. I had two options because it could be traumatic for some families to see that flag image right away, so we asked her family and they agreed and then the design became easy.

Alaa: I saw the mural in Brighton (UK) of her and was impressed. It felt like there should be something in Toronto because she had lived here. It seemed to make sense to do it on a specific day: the one-year anniversary seemed like the only time to do it. In March 2021 we figured out how to get that going. The first step was contacting Keitha (the painter) to get an idea of costs and see if they were willing to do the painting. We created a gofundme account to raise $4,000 initially and surpassed that amount.

What went into the design and location of the mural?

Keitha: In addition to her with the rainbow flag, which is now such an iconic image of her, I thought it would be good to highlight her face so we could see her as a personality, as a person, not just a tragic event. So the black and white portrait is where she looks so peaceful. I didn’t know at the time it was the last picture of herself that she posted.  So the picture is her and her feelings, not about anything else, and is a quiet way to note she’s no longer here.

As for the location, Alaa and I saw the Gofundme was going well so we started looking for a wall along Church street. We walked up and down the street and could see which walls might be available and that one (at 511 Church St.) was big and perfect. It is next to the community centre, a place which helps people—and the people are the same as those Sarah wanted to help and who she was. It is nice for people to walk by, and it has high visibility. Then we found out who we needed to talk to about painting on that wall, then got people we knew to write in support.

Alaa: For the design I left it to Keitha. I answered her questions about Sarah. I showed Keitha’s design to Sarah’s siblings and they were excited about it. We wanted the mural in The Village  because first and foremost Sarah was a queer activist and that’s what most people know her for and what she’ll be remembered for. So having it in the queer Village relates to her queer icon status plus her siblings were ok with the idea.

What did it take to get the mural done?

Alaa: Allies prepared letters of support to the BIA (Business Improvement Association) to give to the owner, and the BIA wrote their own letter, as did some city councillors. We also had the financial donations. And everything happened between March and June. The speed was because of who Sarah was and the way she made people feel, so people wanted to make it happen.

What do you hope will be the impact of the mural?

Keitha: One reason I chose to do the mural and my other activism is to make the world a safer place for our children. I want my children to feel safe and be whoever they want to be. It will be beautiful when this is actually possible.

I hope that the mural brings hope and awareness to people about the real cost of being an activist. Many activists need to take time off to care for themselves. And, especially if you’re a BIPOC activist, it’s hard to find the right counsellor. You have to explain being a BIPOC person and then the specifics that are bothering you. It’s traumatic to have to repeat this with each new worker and there are not enough counsellors. So I hope the mural brings up those conversations and people realize how frustrating and traumatic this whole situation is and how much help is needed.

A lot of people came by to help me while I painted the mural, and everybody had such beautiful things to say about Sarah. I had a couple of friends who saw it went and cried for five minutes. I always hope my work will help people.

Alaa: I told Keitha while she was painting it to re-do the skin tone because it had been too light; I wanted something that reflected BIPOC queer people and give them hope and be represented. I heard the speech on June 12 about the struggles of refugees and Sarah shouldn’t have had to struggle. I just want the world to be better for the next Sarah.

Donations towards the purchase of a plaque for Sarah’s grave can be made here: https://www.gofundme.com/f/community-mural-for-sarah-hegazi-in-the-village