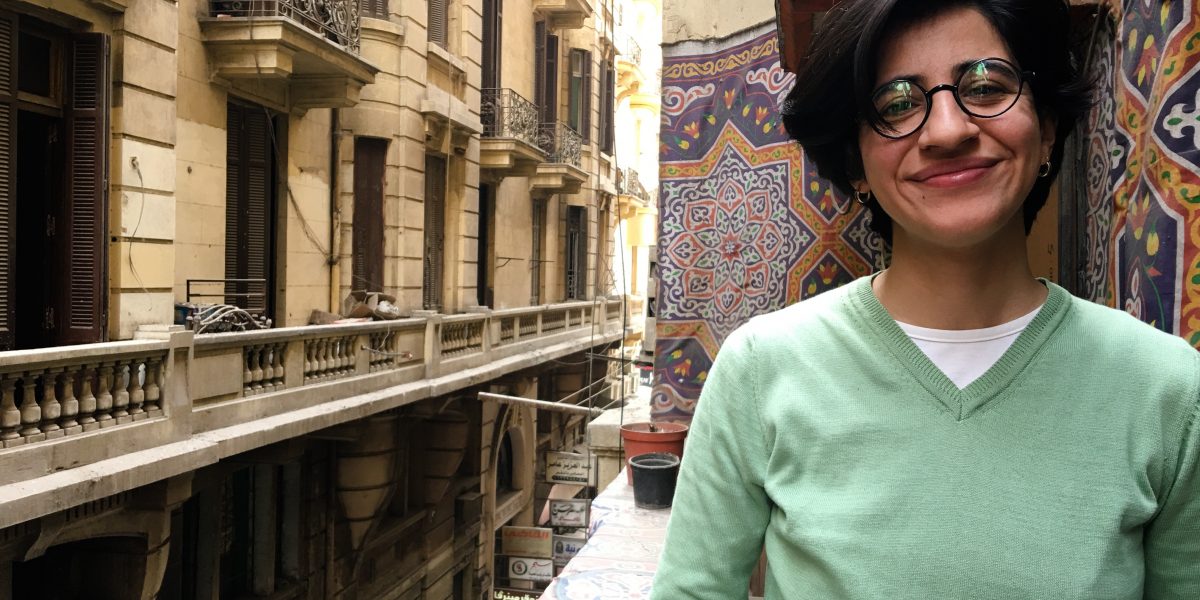 Within minutes of meeting Sarah at Toronto’s Workers’ Action Centre, she declared to me “I am a communist.”  I thought to myself, “Well that saves several hours of discussion.” She had arrived in Canada just a few years before as a political refugee from Egypt where she had been imprisoned – including three months in solitary confinement, in the dark – by the el-Sisi regime for being an outspoken socialist and lesbian.

It was now June of 2019 and we were at a meeting of the Fight for $15 and Fairness campaign. We were both early for the meeting but I could see her sitting by herself and thought I would introduce myself, as I had not seen her there before. She was wearing denim coveralls and was sitting with the chair turned backwards to the table. She stood out right away.

She asked me immediately about the political scene in Toronto and that’s when the “communist” declaration came out. Shortly thereafter she told me of her autism so I came to appreciate the directness that is often associated with people with autism. She told me about the political party she had been part of in Egypt, called Bread and Freedom. A brand new socialist group had just formed in Canada – the Spring Socialist Network – and she joined us almost immediately.

By this time Spring had just started forming relationships with Sudanese revolutionaries living here and she was so happy to have other Arabic-speaking revolutionaries with whom she could discuss common politics. In particular we had a lot of serious discussion and a lot of fun with Elham, Maisa, and Saffa from what was called “Kandaka in White”. Kandaka means “strong woman” and their focus is supporting women victims of violence in Sudan.

Sarah spoke at a joint public meeting of Kandaka in White and Spring, that was also sponsored by the Sudanese Community Association of Ontario on October 19, 2019. The famous Sudanese rapper Mao came all the way up from Dallas to perform. The community centre in Scarborough was packed with hundreds of people.

Sarah contributed so much to our organization. It’s not like we had a whole lot of members who had experienced a revolution! She was a voracious reader and her learnings from that, plus her own experience, meant she brought valuable insights to our discussions. She was especially clear on the role of the state, and her message to Sudanese comrades was to “be aware of the mini-Mubaraks”, i.e. the many faces of state repression that continue to thrive once the dictator is gone. (Read her article on lessons from Egypt’s counter-revolution for Sudan here.)

Sarah had a tremendous love of the arts. Perhaps due to her autism, she disliked noisy, busy events, so instead we sought out quieter entertainment. She loved visiting the Art Gallery of Ontario (see photo), attending the symphony at Koerner Hall, and quiet walks in High Park and being amused by the zoo animals.

But prison had taken its toll, leaving her with significant trauma. (Read her article on the Egyptian counter-revolution here.) And on top of everything else, Sarah had lost both parents at different times–her father before coming to Canada, and her mother after arriving here–so she became the parent for her younger brother and sister.

Some months ago, Sarah moved to Bowmanville as a quiet alternative to the pressures she felt in Toronto. So we took to Skype as our favourite form of communication. The last time we spoke was on my birthday in late May. I told her that her gift to me would be to finally sign her ass up to Zoom so she could take part in more of our Spring meetings. She kindly obliged and sure enough she joined our last webinar called “COVID-19: who will pay for the crisis?” which coincided with the latest attacks on black people, who are already paying for the crisis of course. As you can imagine she held a particular disdain for the police and all state repression apparatus.

I remember her saying “I never felt so alive as during the revolution.” In her honour, and to fulfill our own sense of life, it is our duty to continue fighting for the revolution here, Egypt and around the world.