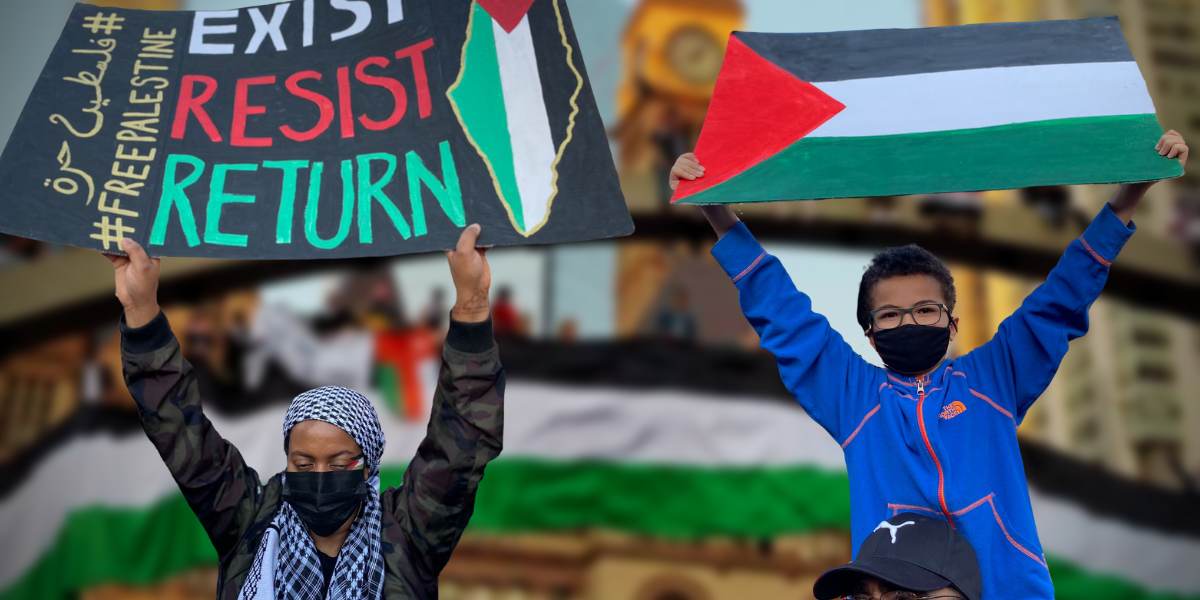 The last week has seen a horrifying escalation of Zionist violence in Gaza. This recent upsurge has occurred around Nakba Day, May 15, which commemorates the catastrophic 1948 displacement of Palestinians and raises awareness about the ongoing displacement in the region. Last weekend, massive Nakba protests in solidarity with Palestine were organized all over Canada — including Vancouver, Calgary, Edmonton, Saskatoon, Regina, Winnipeg, Hamilton, Toronto, Ottawa, Montreal, Quebec City, Saint John, and Halifax.

As Chandni Desai, a longtime organizer and activist with Faculty for Palestine, notes, “the settler state is using illegal and quasi-legal means to remove and dispossess Palestinian families from their homes in order to replace them with Jewish settlers, which is a clear example of ethnic cleansing.”

The violence has grown from evictions to airstrikes, and now ground invasions across Gaza. Residential buildings in densely-packed neighbourhoods have been destroyed under the premise that “terrorist organizations” are occupying them, including buildings that house foreign media organizations — which is considered a war crime. Al Jazeera reports that since the attacks began a week ago, at least 198 Palestinians — including 58 children — have been killed, and over 1,300 have been wounded. Many more have been displaced. Because of the destruction, water and electricity are in short supply. Hospitals are overwhelmed.

This past Sunday was described as the bloodiest day of the siege so far, with a surprise overnight bombing campaign killing at least 42 people, including a baby aged only 6 months. More air raids were launched Monday morning, and Israel has now warned the United Nations it will bomb 2 schools, which also house refugees.

In no uncertain terms, the human rights abuses, war crimes, systematic persecution, flagrant destruction of civic infrastructure, and murderous rampages central to Israel’s ongoing colonization of the region is exacerbating a humanitarian crisis of tremendous proportions. It is another chapter in a long history of staggering cruelty and outright denial of human rights that Israel has levelled against the indigenous Palestinian population, with Western support, for over 70 years.

“Israeli and Western media outlets are white washing Israel’s colonialism and apartheid character by claiming that these are ‘evictions’ in a contested neighborhood,” says Desai. “What is taking place in Sheikh Jarrah is not a real estate dispute. It is the settler regime’s larger plan of colonial, illegal settlement expansion and forcible transfer.”

Desai notes that Sheikh Jarrah families have endured lengthy and exhausting legal battles since 1972 to confront eviction lawsuits brought against them by settler organizations (such as Ateret Cohanim, Elad, and Nahalat Shimon International that take them to Israeli courts). The courts unlawfully apply discriminatory laws in favour of settler organizations to drive Palestinian dispossession.

In the face of such brutalization, Palestinians have also bravely and collectively fought back against Israel’s continued colonization of their land. Their resistance is an inspiration to the entire world. Outcry has exploded globally, calling for an end to the recent escalation of violence, an end to Western support of the apartheid regime, and an end to the Israeli occupation more broadly.

Toronto shows up for Palestine

The Saturday demonstration in Toronto, organized by the Palestinian Youth Movement, was an incredible sight, bringing out over 13,000 people. Anyone who was there — anyone who was even nearby — felt an energy that was electric and revolutionary. By 7 pm, when the demonstration formally began, Nathan Phillips Square was already packed shoulder to shoulder while activists stood atop the Canada sign and scaled the square’s 30-foot stone arches. Thousands chanted together in the warm spring night. It was not just anger and righteous outrage that filled the air, but hope, even joy — those constituent parts of solidarity that make the feeling so potent and powerful.

“I felt that the action created a vibrant space for various communities,” Desai says, “to express their opposition against ethnic cleansing, mass atrocities and war crimes (including massacres, lynching, and bombings) that the apartheid state of Israel is committing against the Palestinian people. Toronto was not the only site of action, thousands from across the nation joined global protests this weekend to stand in solidarity with the Palestinian people. These demonstrations have reaffirmed commitment to the Palestinian people’s struggle for justice, equality and liberation against a settler-colonial state.”

Toronto police had cordoned off a sizeable section for the Zionist counter-protest, which quickly became irrelevant: the few counter-protestors that showed up were chased off by activists fairly early on, or escorted away by police. People soon knocked down the barricades and the demonstration spread across the whole of Nathan Phillips, then spilling out onto the neighbouring streets. If you’d arrived even a little late, it would’ve been remarkably difficult to find a place to stand. These are, as many observed, “good problems.”

All night, thousands stood together with flags and signs amidst the sound of song and car horns, continuing long after the demonstration officially ended. Many signs that appeared in the crowd decried not only the occupation, but Canada’s ongoing support of it — taking aim at the country’s weapon sales to Israel and its hypocritical failure to condemn the regime’s war crimes.

Other signs criticized the toothless pleas of politicians for “both sides” to end the “clashes” happening in the region. As Moe Alqasem writes, “terms like ‘clashes,’ […] decontextualizes the violence and frames the issue as a conflict between equal sides, muddying rather than clarifying the issue. It buries the colonial relationship at the heart of the struggle.”

One sign at the demonstration read: “It is not a conflict if 1 side has the guns, & the other side is praying.” A cursory look at the death and injuries on both sides illustrates exactly who has the guns, and who is praying.

While recognizing this is nothing close to a war between two equal sides, we must at the same time support Palestinian resistance to Israel’s ongoing colonization of their land. Greg Shupak points out why that resistance is defensible, noting that 68.5 percent of Palestinians in Gaza are food insecure and 53 percent live in poverty while the broader economy and basic services have collapsed. Gaza’s health care system has been destroyed by the blockade and siege. Deprived of critical resources necessary to cope with the spread of diseases, including COVID-19 and unable to meet the needs of a population under violent attacks, Palestinians in the Gaza strip are suffering. As Shupak notes, “in this context, it’s difficult to imagine any state or non-state group that wouldn’t fight back.”

Though the media and politicians still seem hopelessly wedded to the “both sides” narrative, we are at the same time seeing that organized resistance to Israel is having an impact on the conversation. Demonstrations appear to be larger than before, and more politicians, media figures, and unions than ever are speaking more honestly about the circumstances. Even Human Rights Watch, known for its failure to condemn the regime’s actions, has now concluded clearly: “Israeli authorities are committing the crimes against humanity of apartheid and persecution.” Just last night, on a show that brings out millions of viewers, John Oliver called Israel out for war crimes and apartheid. The regime’s control on public relations is starting to slip.

Of course, we have much, much further to go. We must continue raising the visibility of this humanitarian crisis while pushing back against the dominant narratives that attempt to criminalize Palestinian resistance to the apartheid regime, or try to equate their responses to those of their oppressor.

Protestors also made an important connection between the Palestinian struggle and Canada’s role as a settler-colonial state, chanting, “from Turtle Island to Palestine, occupation is a crime.” We can never forget that the ongoing struggle against colonization is not just happening abroad, but also at home in Canada. No doubt Canada is an inspiration for the Israeli colonial project. Thus our resistance to that project is deeply connected to every other anti-colonial and anti-imperial movement, here and all over the world — from Palestine to Tamil Eelam.

The sheer scale of the action and its energy drew many comparisons to last year’s protests for racial justice in response to the murders of George Floyd and Breonna Taylor. In fact, we should not see these as separate phenomena; they influence and empower each other in their resistance to injustice, their clarity of feeling and analysis. And no doubt both movements are growing each day.

If the abolitionist and Palestinian liberation movements have influenced each other’s energy, Rajean Hoilett also observes that these struggles are connected in other ways, too. During last summer’s protests for justice, “the police responded with tear gas, rubber bullets, flash grenades, and riot shields. If you saw a photo of the state’s violence, it would be easy to think you were seeing Israel’s response to protests in Sheikh Jarrah, Haifa, Lod, or the Gaza Strip.”

Hoilett thus notes that abolitionists “need to commit ourselves to international struggle because the prison-industrial complex is part of the global military-industrial complex,” which we see both in Canada and in Israel. Indeed, Israel is “the world’s largest open-air prison,” seen in “the literal incarceration of Palestinians in Israeli prisons, or the social, political, economic, familial, and spiritual incarceration imposed by the apartheid state.” In both cases, Hoilett writes, “Israel uses carceral tactics to advance ethnic cleansing and genocide.”

“Like all colonized peoples, the Palestinians will liberate themselves,” says Desai. “People of conscience must also speak up for justice and express their principled solidarity with Palestine.”

As Israeli atrocities continue, our solidarity with those in Gaza must remain strong and steadfast. Here are ten ways Desai suggests people can take action to express solidarity with Palestine: