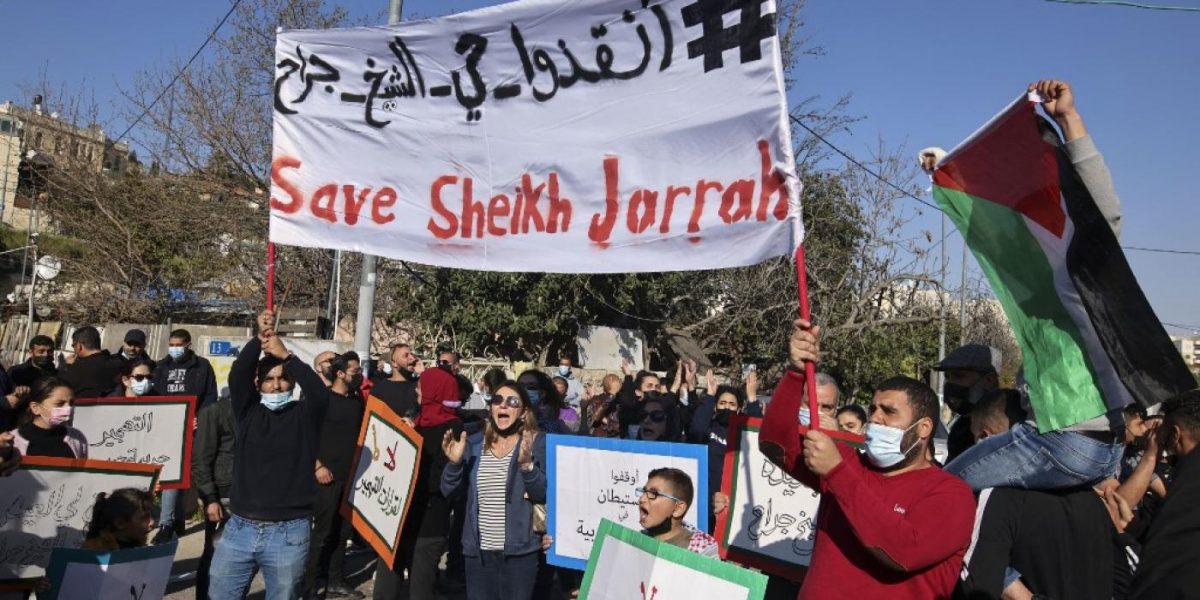 On May 10 an Israeli raid on the Gaza strip killed 20 Palestinians, out of whom, 9 were children. 20 civilians, including 9 children against a full-scale military, this is all too familiar for Palestinians.

A constant reality for most and an open secret for some, Israel is committing an ongoing Nakba against the Palestinians. As we draw closer to the 73rd commemoration of the Nakba, “The Catastrophe”, that saw the ethnic cleansing of more than 800,000 Palestinians and the death of many to pave the way for the creation of the state of Israel.

The neighbourhood of Sheikh Jarrah in Jerusalem holds 38 families. Combined with the Silwan area of Jerusalem – in a neighbourhood called al-Bustan – there are almost 500 residents under threat of displacement. While Israel plans to ethnically cleanse the Palestinian residents of Sheikh Jarrah and Silwan, the protests against the Israeli authorities have escalated with Palestinian protestors beings shot at, arrested, injured, or killed. For Israel, the ethnic cleansing of the residents of Sheikh Jarrah has been an ongoing process, as they displaced families several times over the period of the last 20 years. The strategy is to solidify Israel’s hold over Jerusalem.

The indigenous Palestinians that live in the Sheikh Jarrah neighbourhood have been fighting a long battle with the Israeli authorities and settlers in the form of protests and resisting colonial violence. The Israeli courts have issued “eviction orders” against them that would pave the way for more Israeli Jewish-only settlements. 87 residents in Sheikh Jarrah neighbourhood are facing an imminent threat of dispossession and another round of generational displacement by the end of the year.

The “eviction orders” are just another misnomer as we shall see later in other cases, Israeli settlers and authorities have been trying to remove these Palestinian families from their homes forcefully using harassment, fines, confiscation of property, intimidation, violence, and in other cases assassinations, demolitions and imprisonment.

The Canadian state and the Canadian media have largely been ignoring what is happening in Palestine and the plight of our people. Not only is the Canadian government silent on the situation, but it is unable to uphold its own foreign policy, which recognises Palestinian sovereignty or rule over East Jerusalem.

The coverage of the Sheikh Jarrah issue and protests in Palestine by the CBC and other Canadian news outlets has not only failed Palestinians and the Canadian public, but it has shown their bias and complicity with Israel. When the media uses terms like “Palestinians hurt” and “clashes”, decontextualizes the violence and frames the issue as a conflict between equal sides, it muddies rather than clarifies the issue. It buries the colonial relationship at the heart of the struggle. It is as if a group of Palestinians accidentally fell off a staircase and injured themselves instead of being shot at with live ammunition by settlers and army soldiers, or that the Israeli police/army had a rough evening that resulted in a scrap with a group of Palestinians. Such reporting is dishonest and ultimately downplays and partakes in the actual plight of distraught and oppressed peoples.

A long-standing strategy of social media platforms, such as Instagram and Facebook, is to suppress the political dissent by removing stories and posts that highlight Jerusalem and Palestine, furthering the censorship to stagnate any pressure that is being built up from within the international community and inside other countries.

A stage in the struggle

Sometimes Palestinians or peoples in solidarity with the Palestinian cause can see major events in Palestine as a turning point, a major shift in the political terrain. But we shouldn’t confuse our understanding of turning points with focal points, events that crystallize political relations. We are witnessing focal points; we are not seeing the Palestinian people in the homeland or diaspora change their minds about national liberation or their attitude towards the zionist-settler colonial project. We are seeing a miniature implosion from within Palestinian civil society that will be repeated with a variation of intensity until the next turning point.

The continuous encroachment of the Zionist agenda on Palestine, as well as the developments domestically and internationally, will drive the Palestinian population to a moment of full-blown uprisings. These uprisings are happening at this moment, and whether they are sustained for a long term or if they’re short-lived, the realisation Palestinians have come towards is that resistance and new leadership can emerge from the ground and that the self-proclaimed self-appointed leadership of the Palestinian Authority will not aid in our struggle for national liberation, as we gear to confront Zionism.

Remembering the past and fighting for the future

In the West Bank, the Palestinian Authority has been submissive, quite characteristic of a comprador government or sub-government. More often than not, the Palestinian Authority’s security forces have been the first line of defence that has protected the interests of the Israeli state and the zionist project, by immediately suppressing dissent or any hint of a popular uprising.

This time around, their presence has been lagging, the PA security forces missed a chance to stop one of the first demonstrations in the West Bank against what is happening in Sheikh Jarrah and Silwan. This goes to show either a hesitancy on their behalf or a lack of capability, as their own sub-rule starts to diminish. Recently, Mahmoud Abbas has called off the elections that were set to happen during this year, signifying amongst other things, a lack of confidence in their ability to host an election, let alone win one or garner popularity within Palestinian society. The fall of the Palestinian Authority is inevitable. As it political leadership fades localized leaderships in sections of Palestinian society will emerge such as the one we are seeing in the parts of Sheikh Jarrah and Silwan, and eventually, a new form of national leadership will take over.

We are more committed to the commemoration of the Nakba and what preceded it. As a people seeking national liberation in a time of facing the last bastions of colonialism and settler-colonialism, we intend to reverse its effects, restore our land, return to our homes, and exercise our rights of self-determination. For the people of Sheikh Jarrah and Silwan, who have courageously stood up to exemplify that conviction, this is only part of a larger scale struggle towards a turning point that will lead us to reclaim our stolen homes.