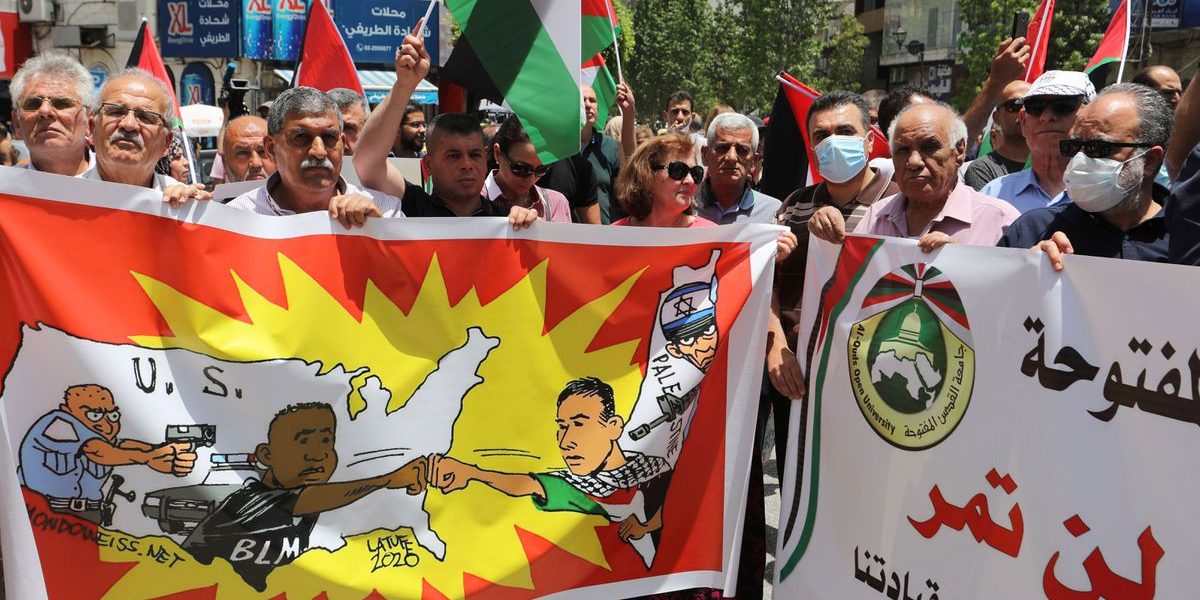 People of conscience worldwide are reeling from the violent attacks on Palestinians by Israeli settlers and the Israeli Defence Force (IDF). More than ever, we are reminded that our abolitionist movement is a global struggle that is incomplete without a commitment to ending Israeli apartheid.

The movement for prison abolition has had a long and well-documented tradition of solidarity with Palestinian people, because of the deep connections between our struggles and the continued collusion between our oppressors. Black revolutionaries have always been fierce comrades of the Palestinian struggle. During her campaign for freedom, most famously, Angela Davis called on the growing prison abolition movement in the United States to transform into an international movement with Palestine at its centre.

The solidarity between our movements is mutual. During the uprisings following the murders of George Floyd and Breonna Taylor, tens of thousands of people took to the streets across the world in pursuit of justice. The police responded with tear gas, rubber bullets, flash grenades, and riot shields. If you saw a photo of the state’s violence, it would be easy to think you were seeing Israel’s response to protests in Sheikh Jarrah, Haifa, Lod, or the Gaza Strip.

Palestinians living under Israel’s occupation are no strangers to militarized policing. And they shared their knowledge and tools with the world as we developed our resistance during the uprising for Black lives.

Israel is a carceral state. Since 1967, Israel has imprisoned over 800,000 Palestinians, meaning 1 in 5 Palestinians has been incarcerated since this time. In April 2020, the United Nations estimated that nearly 4,520 Palestinian political prisoners – including children as young as 14 – were languishing inside Israeli jails. Many of those people are on administrative detention, allowing Israel to detain Palestinians without charge or trial regularly. Palestinian children are tried and convicted in Israeli military courts, which violates international law. Israel has relied on mass incarceration to stifle Palestinian movements and silence calls for liberation.

Israel has made every effort to make life unbearable for Palestinians. Gaza is widely regarded as an open-air prison and reveals the carceral nature of Israeli apartheid. More than 2.4 million people live in the Gaza Strip, with more than 5,046 people packed per square kilometre, making it one of the most densely populated areas in the world. Many Palestinians living in the Gaza Strip are refugees who were displaced from their homes in 1948 upon the establishment of Israel. Palestinians living in the Gaza Strip are under a suffocating blockade that has cut them off from the rest of the world and the surrounding occupied territories. To make matters worse, over the last two decades, the Gaza Strip has experienced seven deadly military offensives, an expansion of military checkpoints and raids, and Palestinians have continued to be displaced from their homes.

Prisons have always functioned to condemn those within its walls to a slow death. Whether it is the literal incarceration of Palestinians in Israeli prisons, or the social, political, economic, familial, and spiritual incarceration imposed by the apartheid state — Israel uses carceral tactics to advance ethnic cleansing and genocide.

Two sides of the same coin

As abolitionists, we need to commit ourselves to international struggle because the prison-industrial complex is part of the global military-industrial complex. The term “military-industrial complex” describes the relationship between militaries and the defence industries that supply them. The capitalist interests of the companies that produce weapons and surveillance technologies are one of the driving forces behind military spending. As it has become more difficult to justify spending money on wars, states have used that money to further militarize their police, extend surveillance in poor communities, and expand infrastructure in sites of human caging.

Israel is directly connected to prisons and police worldwide, as one of the world’s leaders in military and drone exports, “counterinsurgency” technologies, and high-tech weapons systems. Through trade relationships, Israel participates in the ever-expanding infrastructure of policing and prisons in Canada. Beyond trade relationships with different levels of government, Israel maintains support for police forces across the country. Police across Canada purchase military and surveillance equipment from Israel and attend training seminars with the Israeli Defence Force (IDF). These police forces bring back IDF tactics to further violate oppressed peoples. Many of the tactics used by the IDF to evict people from their homes in Sheik Jarrah and shut down peaceful protests in the Gaza Strip, are deployed by militaristic police forces in Canada at protests, evictions, searches and “wellness” checks.

Seeing the footage of flash grenades going off in the streets and people being pulled from their homes calls to memory the fatal police interaction that saw Anthony Aust, a young Black boy in Ottawa, die in December 2020. Ottawa police and a SWAT team conducted a no-knock raid on Anthony’s family home, where they rammed through his apartment door and set off a flash grenade. Predictably, Anthony awoke from his sleep terrified. He then tragically jumped from his window to his death. The officers that planned and carried out this raid were likely informed and inspired by the IDF. Palestinian people are turned into test subjects for tools of oppression shared the world over.

None of us are free until Palestine is free

Prison abolition is not just about closing prisons and jails. It challenges the conditions that make poor people and people of colour disposable. It requires that we challenge the racist and colonial logics that makes it possible for the state to prioritize spending on torture, punishment, and harm instead of housing, food security, and transportation. Prisons and jails are a by-product of white supremacy, colonialism and imperialism. These same oppressive forces underpin the Israeli settler-colonial project, and long as Palestinians live under apartheid, our demands for abolition will remain unrealized.

Abolition is an international struggle, and we must unequivocally demand Palestinian freedom. Abolition requires nothing less.