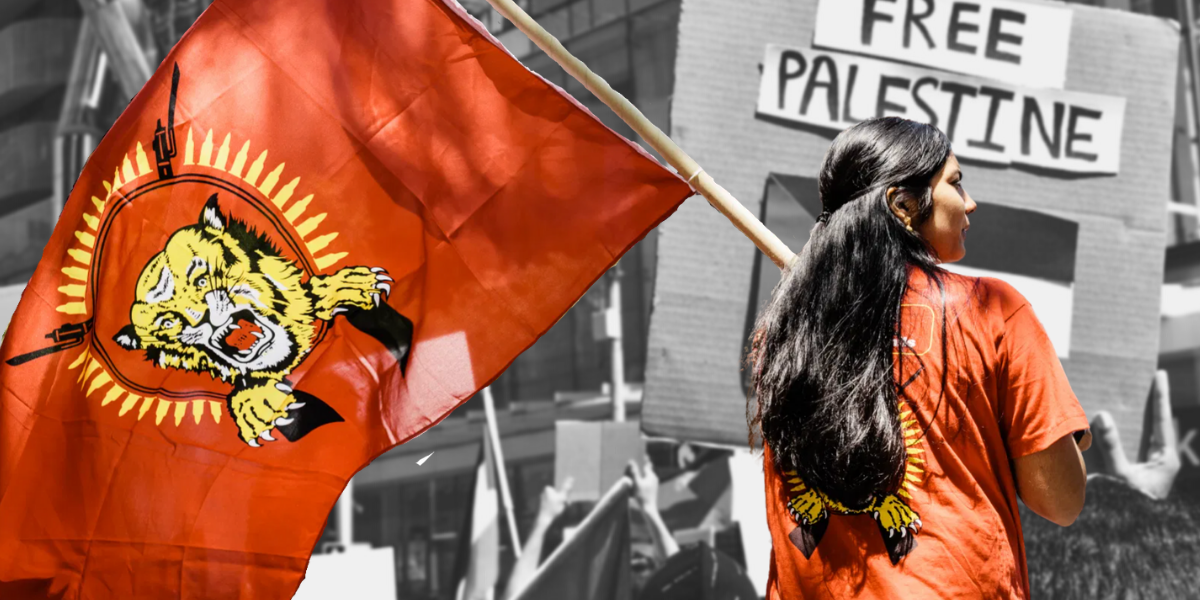 Towards the end of 2008, I joined thousands in Toronto to protest Israel’s attack on Gaza. Like people all over the world, we called for an immediate end to the war. At York University, where I was a student, we mobilized the campus to defend Palestinian rights.

A few months later, bombs were falling on my people — in the Vanni region of northern Sri Lanka. And once again, we hit Toronto’s streets in protest.

I realized then that even though our homelands are oceans apart, Palestinians and Tamils have much in common.

Through the “war on terror,” the Israeli and Sri Lankan armies have waged war on civilian populations. The Rome-based Permanent Peoples’ Tribunal has commissioned an independent report about Sri Lanka’s war against the Tamil people. The report finds the Sri Lankan state guilty of bombing hospitals, humanitarian operations and even government-declared “safe zones” in clear violation of international humanitarian law. A United Nations report estimates that from January to May 2009, between 40,000 and 75,000 persons were killed.

The Sri Lankan government’s own statistical data reveal that almost 147,000 persons remain unaccounted for: no one knows if they are held in prison, injured, or dead.

Nevertheless, there are more direct connections.

Israel has been a major arms supplier to Sri Lanka’s government and provides it with strategic military advice. With permission from the United States, Israel has sold Sri Lanka consignments of Kfir jets and drones. Israel supplied the Dvora patrol boats to Sri Lanka, which was been used extensively against Tamils

Israel has also provided training to the Special Task Force, a brutal commando unit in the Sri Lanka police.

The similarities do not end there. Both Palestinians and Tamils endure settler-based colonialism and the denial of national sovereignty.

In the 1980s, Israel offered advice to Sri Lanka as it built Sinhala-only armed settlements in the eastern province. Like those in Palestine, the settlements aimed to create buffer zones around Tamil-majority populations (the Sinhalese are the ethnic majority of Sri Lanka).

The strategy employed was the same as Israel’s in the West Bank: to destroy the local population’s claim to national existence and render invalid political solutions based on popular sovereignty.

Land seizures and settlement programs in Sri Lanka fragment the Tamil people’s national and social coherence throughout their historic homeland in the north and east of the island. The effect is to undermine any possibility of creating a contiguous national homeland.

Within the occupied West Bank, this process takes place against the backdrop of “dialogue,” which more Palestinians see as a sham as Israeli settlements spread across their land and threaten complete annexation.

After the 2009 war, the Sri Lankan government used the rhetoric of “reconstruction” and “redevelopment” to obscure its process of rapid colonization.

For Tamils, “post-war development” has become another form of counter-insurgency warfare, whereby Sinhala settlements, state-led militarization and the open gerrymandering of constituencies all threaten the Tamils’ historic relationship to their homeland.

In particular, the Oslo accords signed by Israel and the Palestine Liberation Organization in 1993 — have been instructive for Tamils.

An international agreement with India foresaw Sri Lanka holding elections for a Northern Provincial Council in September 2013, supposedly another gesture of reconciliation. The US-backed the election, despite serious reservations within Tamil civil society and the diaspora.

The council provides Tamils with only the perception of self-determination — similar to the experience of the Palestinian Authority — while the military occupation continues to dominate every aspect of civilian life. The council’s powers remain under the control of the Sinhalese-dominated government in Colombo, Sri Lanka’s capital. Its governor is the direct appointment of the Sri Lankan president.

Regardless of the façade of self-government, the crime of apartheid remains a fact of life for Tamils in Sri Lanka, as it does for Palestinians under Israeli rule.

Sri Lanka’s treatment of the Tamils in the north and east of the island meets the definition of apartheid contained in the 1973 International Convention on the Suppression and Punishment of the Crime of Apartheid.

Apartheid involves the domination of one racial or ethnic group over another. The convention does not restrict the particular manifestation of apartheid in South Africa or majorities being oppressed by minorities. Instead, it condemns practises that resemble apartheid — of which there is more than one version.

The unitary Sri Lankan state structure constitutionally places all power of the state exclusively in the hands of the Sinhalese people while denying Tamils equal access to education, their language, their land, and self-determination.

Ilan Pappé, an Israeli historian and social activist, argues that apartheid in the West Bank forms a broader strategy of national oppression, most evident in the incremental and slow-moving genocide in the Gaza strip. We can understand Tamil oppression by stepping away from the common-sense definition of genocide as a single act of mass killings. Genocide is a process, not a single moment of mass annihilation. The burning of the Jaffna Library in 1981—an irreplaceable repository of ancient Tamil manuscripts from across South Asia—represented a moment of cultural and historical destruction of Tamil group identity. The denial of the Tamil language in the country’s administration degraded the group’s language, and the denial of university education marked an attack on the economic existence of the Tamil people.

Genocide, of course, kills through stolen land aimed at turning a nation into a scattered minority across their homelands.

Occupation is a crime

Armed with Israeli military advice, Sri Lanka has pursued a strict policy of stolen land and settlements. Successive Sri Lankan governments have pursued this strategy under the guise of development and high-security zones controlled by the military. These projects intensified after the Tamil resistance movement was defeated in May 2009 with US and UK backing.

Today, 12 years after the 2009 Tamil genocide, Sri Lanka is committed to the entrenchment of the military occupation in all facets of Tamil civilian life. The military expenditure has increased from $1.1 billion at the end of the 2009 war to $1.83 billion in 2021.

Twelve years after the end of the war, an occupation army of over 100,000 soldiers control the Tamil homeland: Five out of seven of the Sri Lankan Army’s regional headquarters run across Jaffna, Kilinochchi, Mulaitheevu, Vavvunia, and Trincomalee in the North and East. Research by the Oakland Institute reveals that from Alampil Kokkailai in Mullaithivu – a radius of 15 kilometres – Sri Lanka maintains seven army camps and five naval bases. Like the Israeli Defence Forces (IDF), the Sri Lankan Armed Forces (SLAF) guard settler-colonies and restrict the indigenous population from travelling freely through their homeland.

In light of this shared experience, the Palestinian and Tamil peoples are enduring a slow — but relentless — genocide.

The massacres in Gaza and the Vanni were carried out to kill civilians, cause serious bodily and mental harm, and impose conditions of life that produce partial and gradual physical destruction — all with little meaningful opposition from global capitals. Both qualify as cases of genocide, as the United Nations define it.

In Sri Lanka, as long as it uses the language of “reconciliation,” it will continue to pursue the same strategy and enjoy praise from major powers.

However, the realization of our peoples’ aspirations does not depend on the whims of foreign governments. It rests with the Tamil people — as the aspirations for a liberated Palestine rest with the Palestinians — and the support of a mobilized and engaged international solidarity movement. By supporting each other’s struggles and learning from each other’s histories, we can get one step closer to a more just world.

For both Palestinians and Tamils, the attacks of 2008 and 2009 were part of a broader history of dispossession, occupation and genocide. Our people have a lot in common in the struggle for peace and justice. Our oppressors appear to have lots in common too.

This article is a revised and updated version of “Israel advises Sri Lanka on slow-moving genocide,” originally published on Electronic Intifada.