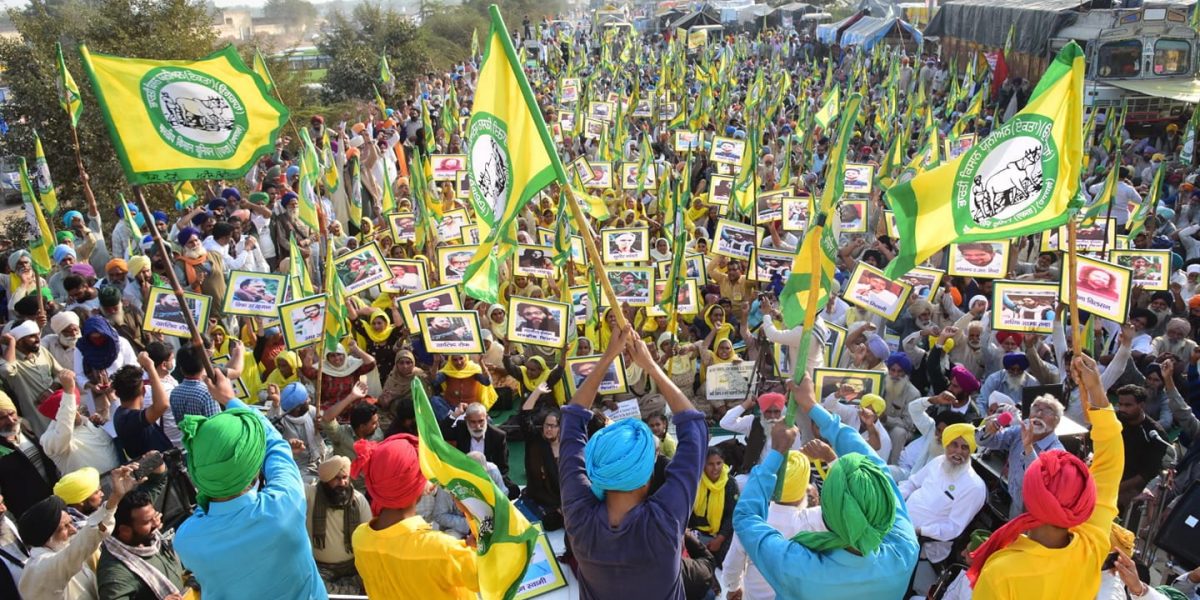 In a stunning victory for farmers and workers, Modi announced that the three farmers laws would be repealed on November 19.

Over the course of the year, farmers were steadfast in their opposition to the three farm laws that would have dramatically worsened their livelihoods and destroyed farming communities across Punjab and India. This battle showed the growing resistance against the effects of capitalism in India. And all signs show this fight will continue.

The opposition to the farmer laws was international, with solidarity actions taken up by the Sikh and Indian diaspora across Canada, USA, Britain, and many other countries. This show of solidarity and support was important to the farmers in India, and it helped keep sustained pressure on the Modi government to repeal its laws. This show of solidarity also extended beyond the diaspora with many activists and social justice groups like Spring Magazine and labour unions.

The importance of international solidarity cannot be understated. Groups like Khalsa Aid, with the support of the Sikh diaspora, global activists, and other organizations, were able to provide food and essential goods to farming communities and to the protest sites in India. Getting food, clean water, and medicines to the front lines of this protest was paramount. The sheer number of supporters sharing and writing content on various platforms such as Instagram and Twitter helped put a global spotlight on the struggle.

Through international solidarity, farmers were able to continue their protest and build a strong opposition to these laws in defiance of Modi’s government. When Modi announced the repeal of these laws on November 19, he looked and sounded completely defeated. The announcement coincided with the founder of Sikhism’s birthday, Guru Nanak’ Dev Ji’s Gurpurab. This day chosen by Modi was by no coincidence and was politically motivated.

Since Modi and the BJP came into power in India, they have enacted various laws and economic reforms  to serve the capitalist class over the working class. India’s economic struggles over the last couple of years have gravely impacted farmers and workers. This has been compounded by the effects of the ongoing COVID-19 pandemic.

The unemployment rate had been steadily rising between 2016 and 2020. India’s healthcare spending was also declining, prior to pandemic-related spending. During this period, Modi was pushing for a US-style health care system which the government knew was more expensive and would result in poorer health outcomes than a universal public health care system. Income inequality between the rich and poor has widened dramatically under Modi’s rule.

Since the repeal of the farmers laws were announced, farmers and workers are now directing their attention on outstanding demands before ending the protests. These demands include the repeal of anti-labour laws and getting a legal guarantee for Minimum Support Price (MSP), which provides price security for farmers, and the withdrawal of hundreds of cases against farmers and protestors. Farmers are also requesting allocation of land at Singhu border for the building of a memorial honoring the memory of the nearly 700 protestors who died during the protest.

While Modi and the BJP cannot be trusted on any level, what we do know is he will continue to serve corporate interests. What this will mean for the working class in India is falling incomes, loss of good paying jobs, little to no social supports, deteriorating labour rights, worsening of environmental conditions, and rising insecurity for India’s most vulnerable populations and oppressed groups. This is why farmers and workers in India must continue their resistance and why international solidarity is more crucial than ever.

Justice for the lives lost and for political prisoners

The fight for justice for farmers and their families stretches back decades. The current protests are reminiscent of the Sikh movement during the “Green Revolution” in Punjab in the 1970s. As in similar fashion today, the Indian government enacted violent policies against Sikhs and farmers.

In 1982, Sant Jarnail Singh Bhinderwale launched the “Dharam Yudh Morcha” (“righteous campaign”), with its goal of ending the profit-seeking behavior of corporations in Punjab and ending the exploitation of farmers and workers. However, what ensued in June 1984 was the Sikh Genocide, which continues to impact Sikhs and farmers today from both a sociological and economic perspective.

Given this backdrop and Modi’s history of genocide and human rights violations, there was a genuine heightened level of fear that Modi would come down hard with an iron first. However, the large number of farmers protesting in India and international solidarity were crucial in preventing another genocide.

To this day, there are many BJP supporters calling for state violence against the Sikhs and the farmers and there are numerous individuals who need to be brought to justice for inciting and committing violence against the protestors. Kangana Ranaut, a BJP supporter and Bollywood actress, recently called on the government to push for a Sikh Genocide, using 1984 genocide as an example. In addition, the BJP Minister of State, Ajay Mishra, was a source for inciting various acts of violence against farmers. In fact, his son, Ashish Mishra, is currently incarcerated for his role in driving a jeep into farmers and killing eight people at Lakhimpur Kheri.

In total, there have been over 700 lives lost since the protest began and hundreds of protesters and activists arrested as political prisoners. The farmers are united in their call demanding justice and those in power be held accountable for engaging in violence and for those responsible for the deaths of farmers. Farmers are united in their call to free protesting farmers and political prisoners in India.

As stated earlier, the announcement coincided with the founder of Sikhism’s birthday, Guru Nanak’ Dev Ji’s Gurpurab. Sikhs and famers make up a large portion of this resistance and make up a large voter base in the upcoming Punjab and Uttar Pradesh elections. Farmers are seeing right through Modi and his fascist BJP party’s political games.

The goal for the working class in India now is to continue to build on the solidarity that has led to the victory for farmers. This resistance must extend beyond the Sikh community and farmers and it must connect with other oppressed and targeted groups in India who have been resisting Modi. This includes but not limited to connecting various struggles from Muslims who have been resiting unjust citzenship laws. It includes the fight for equal rights for Dalits, women, and the LGBTQ+ community and labour unions’ struggle for stronger labour, environmental, and human rights protections.

As Sikhs and farmers continue their resistance, the expansion of solidarity will bring about more victories. This continued resistance is evident today where millions of farmers in India celebrated the one-year anniversary of the farmers’ protest and where thousands of farmers and their supporters marched toward Delhi, the national capital.

This repeal of the three laws is a victory for farmers and for the working class of India. But it is also a victory for everyone across the world who stood in solidarity with the farmers: whether it was a retweet or an Instagram share, whether it was a donation or writing for Spring Magazine, whether it was providing space to have these discussions or a podcast, whether it was standing out in the streets in so many cities across this world demanding justice for farmers. We all played a role and the importance of international solidarity was on full display when a defeated Modi announced the repeal of the farm laws.

While the battle against the farmers’ laws may have been won, the fight is far from over. The resistance must now turn its focus to the upcoming elections and work in solidarity with workers to repeal Modi’s capitalist reforms. But this resistance should extend beyond the borders of India. We too can achieve socialist victories here in Canada. This victory has shown us in action that, when people are united, we will never be defeated!