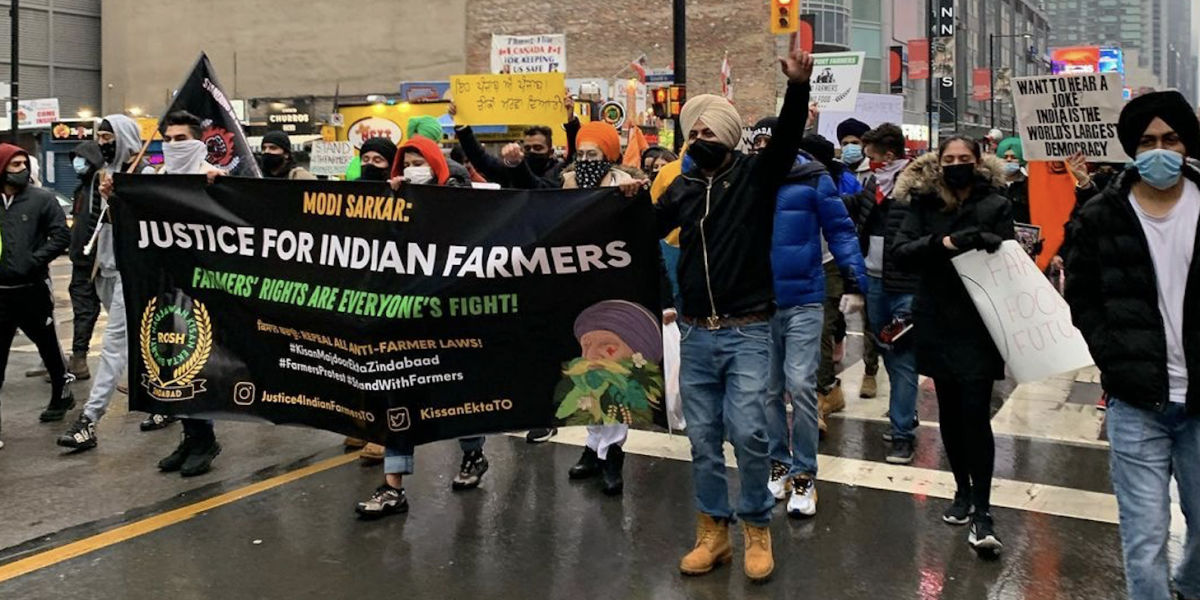 As I weathered the downpour on a Saturday afternoon to 365 Bloor St, the building that hosted the Indian consulate in Toronto, numbers of protesters arrived in trucks, honking loud and clear in dissent. Elderly Sikh community members held up signs saying “Farmers against corporations” while organizers distributed chai and samosas to all those attending. The spirit was high as the South Asian diaspora community and fellow socialists gathered to rally in solidarity with Indian farmers resisting privatization efforts from the right-wing Modi government.

One of the organizers of @Justice4Farmersto said, “Our fathers and forefathers are out in the streets of Delhi, weathering the cold and resisting police brutality. This Canadian rain will not stop us, just how the Delhi winter hasn’t stopped them.”

That statement held true, because just in a moment even more people marched in (from Yonge-Dundas) chanting “No Farmers, No Food,” and occupied the Bloor-Sherbourne intersection in front of the Indian consulate. No one from the consulate had come down to speak to the community of Sikh diaspora, Indian migrants, and international students.

Indian farmers, mainly from the agricultural state of Punjab, have been protesting for over a month against neoliberal bills introduced by the Modi government. The ruling Bharatiya Janata Party (BJP) has enacted three farming bills that would be detrimental to the livelihood of small farmers and will allow for further privatization of the produce market. The agitation resulted in the largest general strike in history with over 250 million workers joining the farmers in solidarity.

The working class of India have shown exceptional resilience against capitalism despite multiple attacks from the state, including police brutality. At the heart of this resistance is also the cultural survival for Punjab’s farming heritage. As one of the speakers at the rally emphasized, “We have a legacy of farming. Our spiritual leaders taught us to make food and share food, and we will not lose this to private corporations.”

Many of the protestors at Saturday’s Toronto rally also expressed disappointment in mainstream Indian media who have not favoured the frontline farmers and activists.

“We will not wait for mainstream news channels to give us the spotlight,” said one of the speakers at the rally. “We will not look up to Bollywood celebrities who have been silent. We will be on the ground using social media to tell our story.”

One of the three farming bills favour the burgeoning tech industry in India, led by Reliance group whose owner, Mukesh Ambani, is India’s richest man and a close ally of Prime Minister Narendra Modi. The Ambani family also heads media conglomerates and is known to influence India’s social elites. The speakers repeatedly urged all attending to help resist Modi and capitalist media’s narrative by sharing and educating their networks on the resilience of Indian farmers.

The solidarity rally in Toronto was not an isolated occurrence. Rallies and protests across Canada, in Montreal, Winnipeg, Okanagan, Surrey, and other cities have sprung up to support the movement. The South Asian diaspora in North America and Europe are organizing to sway the international community into putting pressure on Modi, although BJP is threatening back.

One of the attending protestors shared, “this fascist Modi government has been successful at one thing for sure – and that is uniting all struggles.”

Earlier in the year, the ruling BJP government introduced the controversial citizenship act which would systematically marginalize the country’s Muslim minority. The draconian law, often compared to the Hitler’s Nuremberg Race Laws, led to mass mobilization across the country, only to be stopped due to the pandemic. More recently, the Indian state of Uttar Pradesh have enacted legislation to criminalize inter-religion marriage, which they sacrilegiously call “love jihad.”

Despite the multiple attacks on communal harmony, workers’ right, freedom of thought, and social equity, Indian people continue to exhibit exceptional resistance against the far-right Modi government. As socialists, we must extend our solidarity to the rising anti-fascist movements and workers’ struggle in South Asia and also take inspiration from it.

*Names of organizers and speakers have been hidden to maintain anonymity.