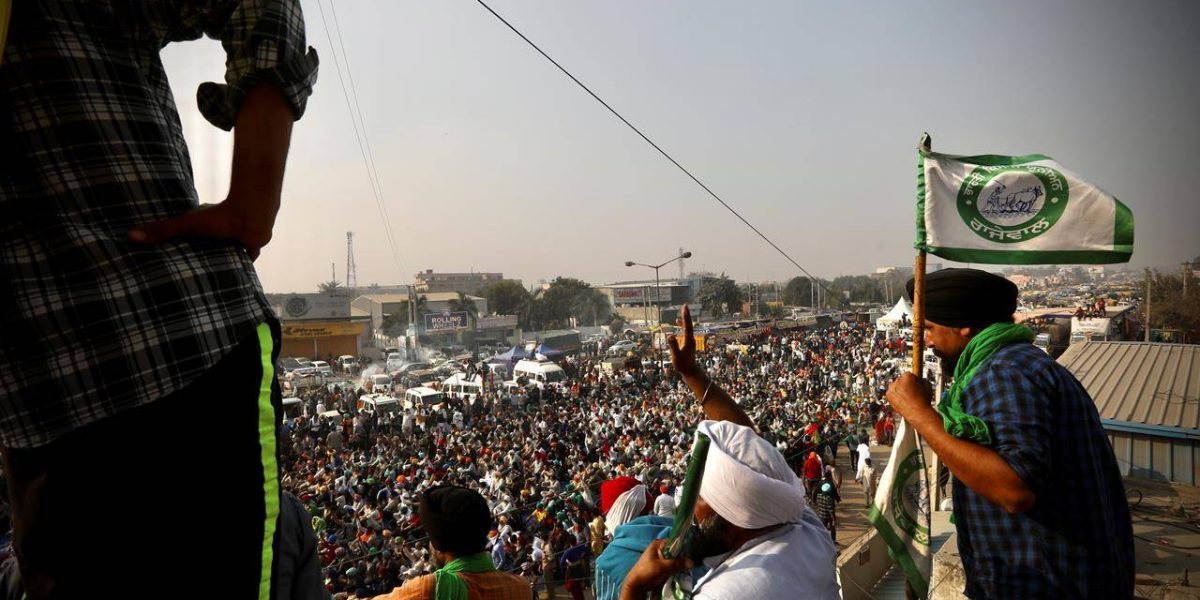 The farmers’ movement in India is making history as it is one the largest protests in the world. India is still a developing country. More than 65% of people depend on agriculture. Indian agriculture has been in crisis for a long time. Thousands of farmers commit suicide each year. This is not a profitable business. This is a way of life.

A few months ago, the Indian government forcibly passed three new laws. No consultations were done with the farmers’ unions and the opposing parties were not given a chance to speak. These laws are also unconstitutional because agriculture does not fall under the jurisdiction of the federal government. These laws are in favour of corporations and will hurt small farmers. More than 85% of farmers in India have less than five acres of land.

Right now, farmers sell their crops in state mandis. Mandis are markets that are regulated by the government. States in the Northern part of India including Punjab and Haryana get a guaranteed minimum support price, or MSP, on wheat and paddy. This means that the crops have to be bought at a certain minimum price. But the new laws would allow farmers to sell their crops outside of the mandis and directly to corporations. Outside the mandi, corporations will not have to pay taxes on the crops. There will be no minimum support price. Corporations will also be allowed to hoard crops and sell them later at a higher price.

They will be able to make direct contracts with small farmers who may have a hard time understanding complicated legal contracts. If there is a dispute in the contract, farmers will also be banned from going to the courts and will have to deal with bureaucrats who are often corrupt. Farmers fear that while corporations might pay more in the short-term, these laws are ultimately a way for the government to phase out the mandi system and the MSP, leaving farmers at the mercy of big corporations. MSP is not a law right now and can be removed at any time. If this happens, farmers will likely lose their land and be forced to become labourers. In other states where similar laws were passed, farmers have suffered and the price they get for their crops has decreased significantly. The government has agreed to make amendments to these laws but farmers’ unions want them to repeal the three laws.

Close to one million farmers have gathered around the capital of Delhi and have blocked all entrances to the capital. They have been sitting out there since November 26, 2020. Thousands of tractors, trolleys, trucks and people are occupying the highways, with some convoys up to 20km long. More than 60 farmers have died in the cold weather. But the farmers are in high spirits. They have set up kitchens, medical camps, schools, blood donations, readings, and more. Farmers from all religions and castes are participating and working together. All workers’ unions are supporting the protest. The government and media are working hard to spread lies and mistrust among the farmers, but the farmers refuse to be divided.

One of the ways in which the government is trying to turn people against the protestors is by calling them Khalistanis. The Khalistan movement is a separatist movement calling for a separate, sovereign state for Sikhs in the Punjab region. This movement is rooted in the grave injustices faced by the Sikh community at the hands of the Indian government which regularly exploits and marginalizes minority communities. While Khalistan supporters are justified in their anger towards the central government, the farmers’ movement cannot be conflated with the Khalistani movement. Farmers’ unions have made it clear that they do not wish to separate from India. They toil endlessly to feed the country.

Moreover, this movement is not limited to one religion. While the majority of farmers in Punjab are Sikhs, farmers and workers relying on agriculture in India come from all religions and castes. They are all a part of this movement and that needs to be recognized. In a country where the government has consistently used religion and caste to divide people (millions have been killed by state-induced riots and violence based on religion), this movement is so special in that it is uniting farmers and workers from across these superficial lines and they are refusing to be divided. For supporters of Khalistan, their solidarity is crucial but this is not the moment to conflate the two issues. The demands of the farmers need to remain central and at the forefront in any show of solidarity.

This is so important as this movement has gained international attention and is unique in other ways as well. Unions, workers, and politicians from across the world are supporting the movement. Farmers unions’ and workers are making the link that the government is supporting big corporations who exploit the working class. Farmers and allies are boycotting products from Adani and Ambani, two of the richest corporations that will profit significantly from the new laws. The boycotts have caused significant financial damage to these companies whose owners regularly funded and privately met with Modi during the election.

We must support this movement as it is not just about the three laws, but because it is also creating a working class consciousness against big corporations and right-wing governments. Historically, the government has always divided workers by religion and caste but this movement is uniting all different working class groups in India. This is a matter of life and death for the farmers. We need to support them to stay strong and make sure the Indian government knows that we are watching them. They used violence at the start of the protest and are now doing it again in different states to prevent new protestors from getting to Delhi. This is a historical moment that we can all learn from and contribute to so let us join to make this moment as impactful and uniting as possible.