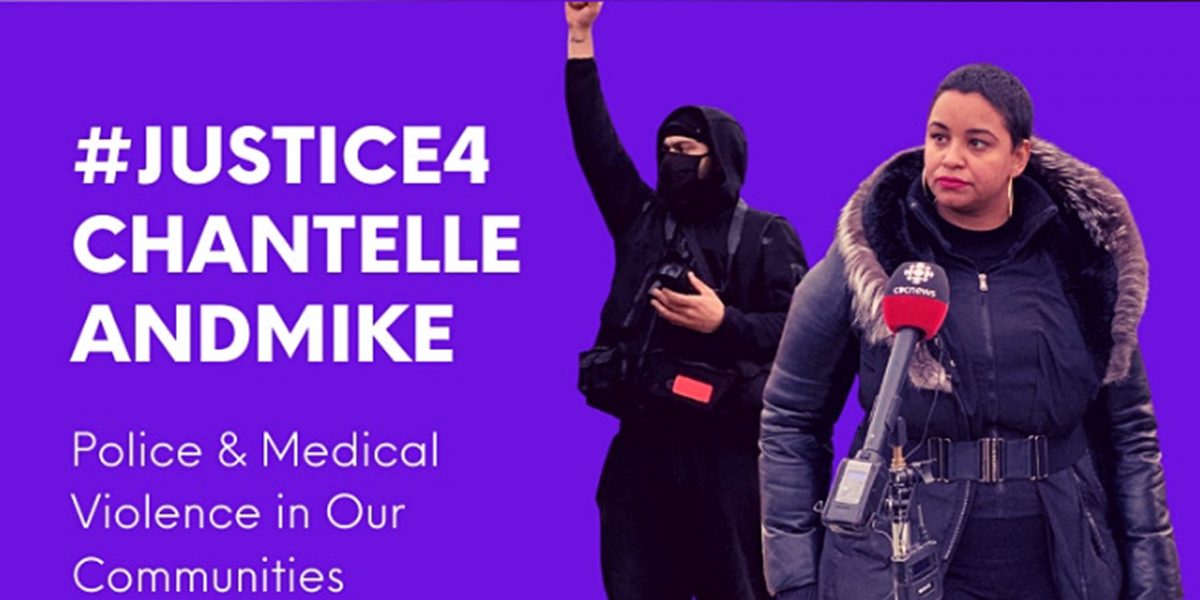 On February 8 Chantelle Krupka and Michael Headley shared their experience with police violence and medical complicity, in an even organized by Malton People’s Movement and Doctors for Defunding Police.

On Mother’s Day last year, Peel Police called Chantelle Krupka and Michael Headley out from their home and tased them, and then shot Chantelle in the stomach. “As I law on my porch getting tased I thought I was going to die, so I reached back and pulled out the cables,” recalled Chantelle. “As I reached out to remove Michael’s, she shot me….I locked eyes with her and asked, ‘did you just shoot me? Why did you shoot me?’”

After tasing Michael, police brought him to a police station for a six hour interrogation. “Throughout the process, I’m asking about my fiancée’s condition, if she’s alive or if she succumbed to her injuries,” he recalled, “and they never told me.”

But getting tased and shot by police was only the start of Chantelle’s ordeal. She then experienced the complicity of the medical system: “Everything from the officer riding in the ambulance, to police getting updates before my family, to the way the doctor operated and reported the gunshot wound as self-inflicted even though I’d told my story every time.”

Chantelle experienced a medical system that not only sided with police, but that perpetuated oppression: “In my face, people were very nice to me in the hospital, seeming to treat me nice. But in retrospect, they smiled in my face and drugged me up,” she recounted, after having gone through her medical records. “Why did doctors stereotype me as an angry Black woman to be sedated rather than offering mental health support?…I didn’t see anybody from psychiatry until six days later, and there was no follow up.”

The event also included progressive health providers responding to Chantelle and Michael’s experience. Family physician Nanky Rai spoke about the history of the Canadian healthcare system, rooted in settler-colonial violence: “Physicians from the beginning of the settler colonial state have been involved in expanding the state…That’s the foundation of our healthcare system, and the majority of physicians see themselves aligned with the police rather than communities that face police violence. There’s an uncritical loyalty to cops.”

“Medicine is a colonial institution that was never made for Black or Indigenous people,” explained Semir Bulle, medical student and co-founder of Doctors for Defunding Police. “It’s not an individual issue, it’s not that doctors are evil. But the system has never valued these lives and continues to do the same…The system benefits from the way it is. When systems are so entrenched with so few people benefiting from it, these colonial systems are not going to give up their power easily.”

Chantelle and Mike join a long list of Black and Indigenous people attacked by police in the Greater Toronto Area—from Jermaine Carby and Andrew Loku, to Jamal Francique and D’Andre Campbell, to Regis Korchinski Paquet and Ejaz Choudry. It was out of the community mobilization against the murder of Choudry that Malton People’s Movement formed. “We see the SIU lives, coverups and corruption, and it’s hard to ignore patterns of behavior,” explained Chantelle.

But connecting with other families has also been a source of empowerment. As she explained, “we experienced what their lived ones experienced in their final moments. It’s empowering to come together to share experiences…These systems are afraid of us uniting, starting to question, and standing up to say we are not going to take it. We are here to unite those who have experienced the same. None of us deserve this treatment and we have to fight against it.”

As her and Michael highlighted, “40% of Peel budget goes to police but they’re not preventing any crimes, and police murders are on par with other homicides. We need to question budgets and priorities and refocus.” Semir also highlighted how defunding police connects with building communities and transforming medicine: “You have to put communities in charge of their own health, and support community self-determination.”

Chantelle and Mike have bravely spoken out about their own experiences and united with others: “We want systemic change, it’s what we’re fighting for and we’re in it for life. Our life has changed and we won’t stop, can’t stop.” But they need support for this fight—including healthcare support for her ongoing injuries, housing support to stop an eviction, and support for their newborn.