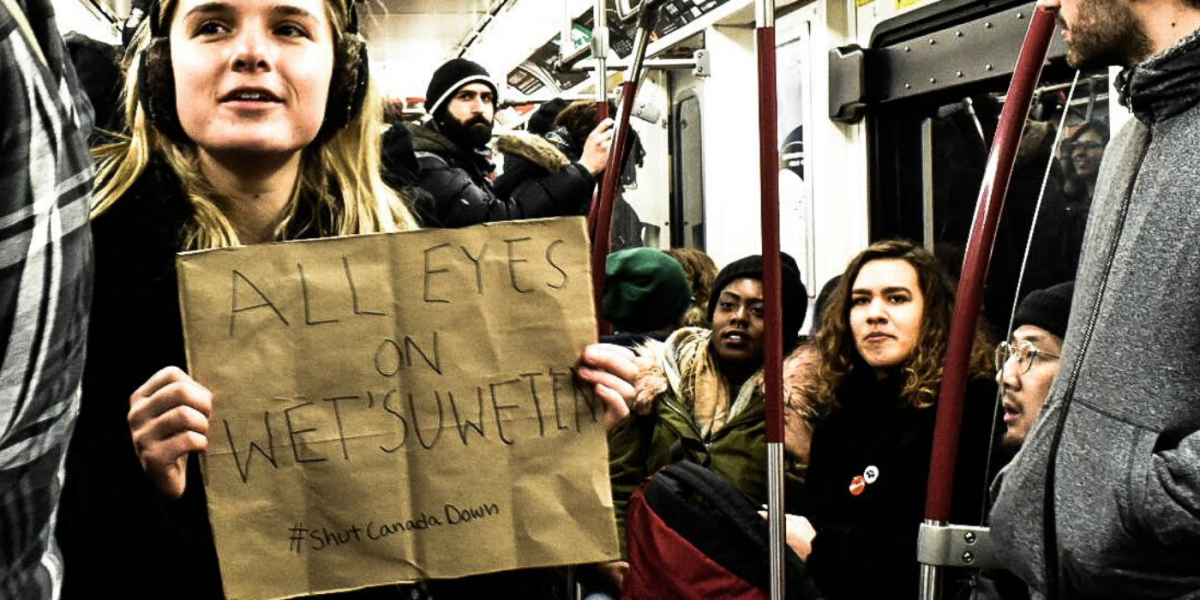 Despite the Canadian government committing to the Truth and Reconciliation Commission (TRC) of Canada’s 94 calls to action and stating that the United Nations Declaration on the Rights of Indigenous People (UNDRIP) would be implemented the colonial violence in Wet’suwet’en shows Canada is drifting further and further away from reconciliation.

The Wet’suwet’en people are facing high levels of surveillance and violence carried out by the Royal Canadian Mounted Police, and solidarity actions are cropping up from coast to coast.

Idle No More to Wet’suwet’en

It is easy to see the similarities between Idle No More and the current actions supporting Wet’suwet’en. Yet, there is one factor that seems to have changed, and that is the involvement of settler allies. Although Idle No More did have allies present it seems as if more and more settler allies are joining in the fight for Indigenous rights and sovereignty. This is a positive development. This is a fight that has been fought by Indigenous peoples across Turtle Island since the point of contact with colonizers. Indeed, colonialism has only shape-shifted into different forms that are more palatable for the settler Canadian public.

The mask of reconciliation put forward by the government is slipping, revealing the dark undercurrents of colonialism that Indigenous peoples struggle with daily. Increased awareness about the hypocrisy of government rhetoric around reconciliation is beneficial to the movement of supporting Indigenous rights, though too many settlers still find themselves frozen in fear.

It is all too common to hear settlers proclaim that they simply do not know enough about these issues, or that they do not want to offend anyone. These are real fears to be sure, yet, they have the ability to hinder much needed solidarity in a time of ongoing turmoil. The reality remains that going forward, settlers must continue to be allies to Indigenous peoples in the fight for rights and sovereignty to be recognized by the current colonial state.

Its time to show solidarity

Being a white settler on stolen unceded territory myself, I have found myself in this situation too- stuck in the throes of my own white settler guilt, essentially immobilizing myself. I let my fear of messing up and my guilt overshadow what needed to be focused on, solidarity. Although this transition did not happen overnight, it was still possible. Indeed, settlers are needed in the fight for change and are required to uplift and support the voices of Indigenous peoples. To not involve oneself out of fear of making a mistake is far more harmful than making the mistake itself. Solidarity is needed, especially given the current political and social climate.

This is why I urge all settlers, especially those who may be frozen in their own fear and guilt right now, to shake themselves of such feelings.

So what can I do?

Donate, get involved, educate yourself, show up to solidarity actions. Bring some warm coffee, help make signs, offer drives to folks who need them. Share social media posts, have conversations with others- yes, even if it’s hard and uncomfortable. These little actions can add up to big changes. Check out the Unist’ot’en website for more information on how you can be a helpful ally. If you are like me and live in Nova Scotia you can volunteer your time, voice, or money if possible, to the Stop Alton Gas Resistance. There are countless steps that can be made to help out.

The working class cannot afford to stand back and let the colonial system continue to oppress Indigenous peoples and destroy the planet. Destroying colonialism is essential if we are going to stop climate change, oppression and exploitation caused by capitalism. It is a responsibility of being a settler on this stolen land to work to dismantle these oppressive systems. Although this may seem new and unfamiliar it is important to remember that it is a responsibility to aid in this struggle. This is history in the making, don’t be on the wrong of it.