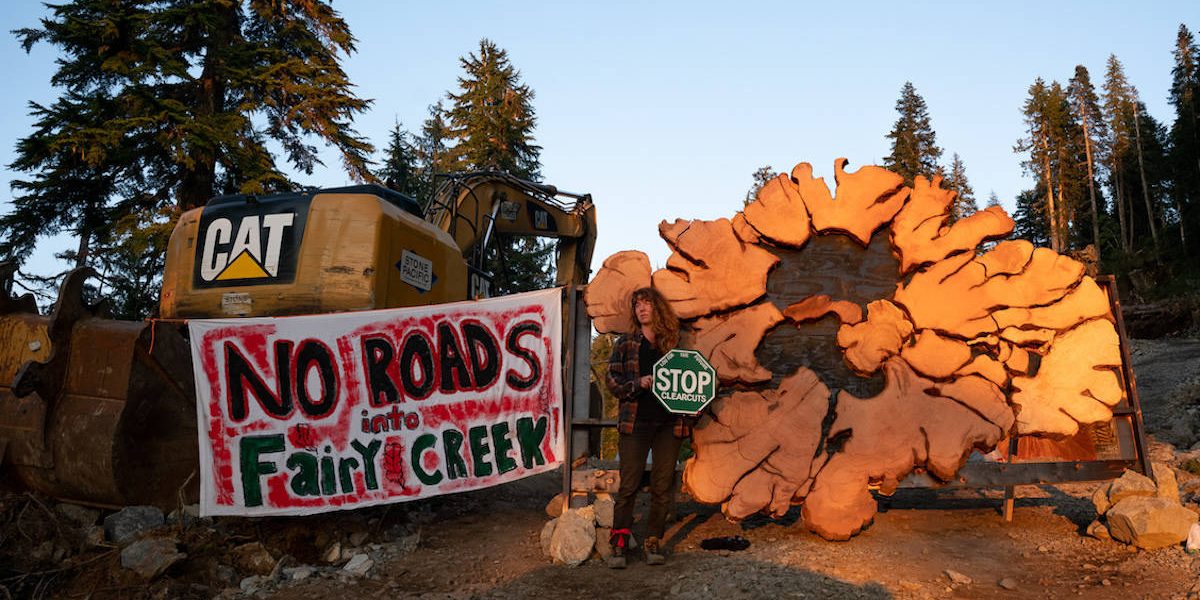 The 2021 federal election has spurred a sense of optimism among supporters of the New Democratic Party hoping for electoral gains when votes are tallied on September 20. Opposition to Trudeau’s neoliberalism and fear of Erin O’Toole’s Conservative Party present something of a possibility for the NDP. In addition, in a year marked by the discovery of genocidal mass graves in residential schools, and the failures of Trudeau to address reconciliation, Jagmeet Singh has spoken out strongly demanding justice for Indigenous communities and promising that an NDP government would do better.

Yet, as the campaign proceeds, a serious challenge is emerging—one that could turn off social democratic supporters, and other activists on the Left who might vote NDP—and it is coming from the NDP itself. As people consider the merits of a federal NDP government, the provincial NDP governing British Columbia is in the middle of a year-long battle over old growth logging in Fairy Creek (Pacheedaht, Ditihadt, and Huu-ay-aht territories). In a battle that has seen increasing violence from the RCMP against Indigenous land defenders and environmentalists, the BC NDP are on the side of the police.

As critics call on the federal NDP, and its leader Jagmeet Singh specifically, to condemn the provincial party’s actions, the response has largely been one of silence. Individual NDP members have focused on the Liberals in Ottawa, but the BC RCMP are contracted as the provincial force overseen by the provincial public safety minister. For many, the NDP’s quietness is telling.

Colonial violence in the woods

As Afro-indigiqueer and Somali/Nuu-chah-nulth land defender Aya Clappis explained, “the heart of the matter is a colonial one and the police presence is evident of that and ongoing proof of colonialism at work…If people understood who we are, they could show up in a much better way. this struggle has been going on for a few hundred years now and that our people never accepted our conditions of colonialism. They never accepted the Indian Act.”

Last year the colonial BC government granted logging rights to Teal-Jones Group, provoking forest defence on Pacheedaht, Ditihadt, and Huu-ay-aht territories (including Fairy Creek). Then colonial courts delivered an injunction against blockades, on behalf of the logging company. Now colonial police have been deployed as the arm of state force in defence of capital.

As of August 21, 2021, the BC RCMP had arrested 740 people, and are exerting their ongoing colonial violence with a vengeance. There have been videos circulating of people being brutalized by police, including beatings and people knocked out of tripods when police try to remove them. In typical police fashion, police violence has been targeted in a colonial and racist way. In the words of solidarity activist Jamie Hunter, the RCMP are “conducting enormously unsafe practices that if left unchecked, will result in serious injury or death, and targeting Indigenous and Black people, in a blatantly racist way.” In addition there have been several photos posted online of police officers at Fairy Creek wearing fascist Thin Blue Line patches.

In all of this, many on the left are asking where the voices of federal NDP Members of Parliament might be in calling out the BC NDP. Where is federal NDP leader Jagmeet Singh, whose riding is in Burnaby, BC?

Instead of leveling criticism against the provincial government, NDP parliamentarians have gone after the Liberals. Jack Harris, the New Democrat critic for public safety and emergency preparedness, sent an open letter to Bill Blair, the minister of public safety and emergency preparedness, to undertake a “full and independent investigation into RCMP actions at Fairy Creek.” Harris’s letter says “it’s clear more civilian oversight of the RCMP is needed, along with reviews of use-of-force incidents and the National Use of Force Framework. It is unacceptable that RCMP officers appear to be using excessive force against protesters in the area, which I fear will lead to an escalation in tensions and possible violence.” But the violence is already there, and it is being carried out by the BC RCMP under NDP governance.

The silence is particularly telling since, as Kevin Liang points out, the federal and provincial/territorial NDP “are more integrated than either the Liberals or Conservatives.” As Liang notes: “Members of the provincial wing are also members of its federal party, and crosstalk between each jurisdiction is common, often resulting in a cohesive front.”

The Dogwood Institute has previously called out the silence of BC NDP caucus members on their government’s support of oil and gas subsidies. They have asked: “Where’s the party’s ‘climate caucus’ when we need them?” Under the BC NDP government, $5.3 billion in subsidies have gone to the international fracking consortium known as LNG Canada. As Dogwood points out, this means that “BC taxpayers now give a billion dollars a year to oil and gas companies.”

There have been some notable exceptions. Anjali Appadurai, the NDP candidate in Vancouver-Granville, recently called the police actions at Fairy Creek “unconscionable.” Filmmaker and green new deal advocate Avi Lewis, who is running in West Vancouver-Sunshine Coast, signed a 350 Canada pledge to “call for an immediate moratorium on new fossil fuel approvals and a freeze on all fossil fuel expansion projects under construction”. Other federal NDPers have avoided the pledge. Notably though, neither Appadurai nor Lewis have been elected and both are running in ridings where the NDP are not favored.

For his part, provincial NDP leader John Horgan has said cynically that he would like to see the confrontation come to an end. Well, he is only the Premier. Horgan has claimed, “Law enforcement doesn’t take direction from government” and “They make their choices based on how the courts direct them and they’ve been directed to enforce the injunction.”

But we’ve seen this deception before. It’s the same thing Horgan said about the massive RCMP deployment against Wet’suwet’en land defenders last year. And this was proven to be something of a deception. In March, it was revealed that Solicitor General Mike Farnworth had written a letter in late January to the BC RCMP’s commanding officer authorizing the “internal redeployment of resources within the Provincial Police Services” precisely to enforce a BC Supreme Court injunction obtained by pipeline company Coastal GasLink. Yet, while the letter was being sent, Horgan made the now familiar claim that “Our government has no authority to vary that injunction, nor to direct the RCMP in the fulfillment of its responsibilities.” After the letter was sent, Horgan doubled down: “Governments do not direct the courts, nor do we direct the RCMP.”

At that time, Grand Chief Stewart Phillip of the Union of BC Indian Chiefs condemned NDP actions: “This letter by Mike Farnworth reveals the blatant hypocrisy and lies of the provincial NDP government on the Wet’suwet’en crisis. Farnworth sat silently while Premier Horgan unabashedly lied that the Province did not direct RCMP actions. This is an act of government deceit not only against the Wet’suwet’en but of the public at-large. The province’s rhetoric about reconciliation rings even hollower. We call for the immediate resignation of Mike Farnworth for dishonourable conduct and for declaring the Wet’suwet’en people a policing emergency and a threat on their own territories.”

Neither is the BC NDP alone among the part’s provincial variants in prioritizing environmental destruction over ecological and human wellbeing. The Notley NDP government in Alberta ran its own course in service of climate crisis capital, most notably tar sands and pipeline developments. It was an NDP government in Manitoba that oversaw expansion of criminal justice systems and structures. We need to keep this in mind when we assess dreams of a green new deal being introduced through a party that is showing repeatedly that it will readily stand with capital against the interests of people and planet, especially Indigenous people on their own territories.

The Liberals, in typical cynical fashion, are trying to harness people’s frustrations with the NDP for their own electoral gains—promising a “$50 million B.C. Old Growth Nature Fund” and that will “work to better protect important old-growth forests for future generations.” But this is deeply hypocritical coming from the party that has paid billions to expand pipelines that fuel the climate crisis.

The real question is the colonial institution of Parliament, which is built on the displacement of Indigenous democracy and which supports the expansion of capital on Indigenous land. No matter which individual or which party is elected to lead Canadian governments will operate to defend the Canadian state and the corporations it serves. Even the most progressive of social democratic parties are based on colonial institutions that are opposed to Indigenous sovereignty.

But these parties should still be accountable to their basic promises, and if the NDP supports reconciliation then the federal NDP should condemn the RCMP and the provincial NDP should use their power to stop the attacks. While the formal outcome of this election will only determine which party leads the Canadian state, the climate justice movement can use the election to build the movement outside Parliament—and to organize for a world without the Canadian state, Canadian capitalism and the multiple forms of oppression that sustain it. As Clappis explained, “true sovereignty would be the ability to live our ways of life, to practice our beliefs and our laws without infringement from the state and industry or any outside body….We need the land back to be liberated the same way that we need systems of policing to be abolished to be free…and that’s tied to Black liberation, that’s tied to queer liberation.”