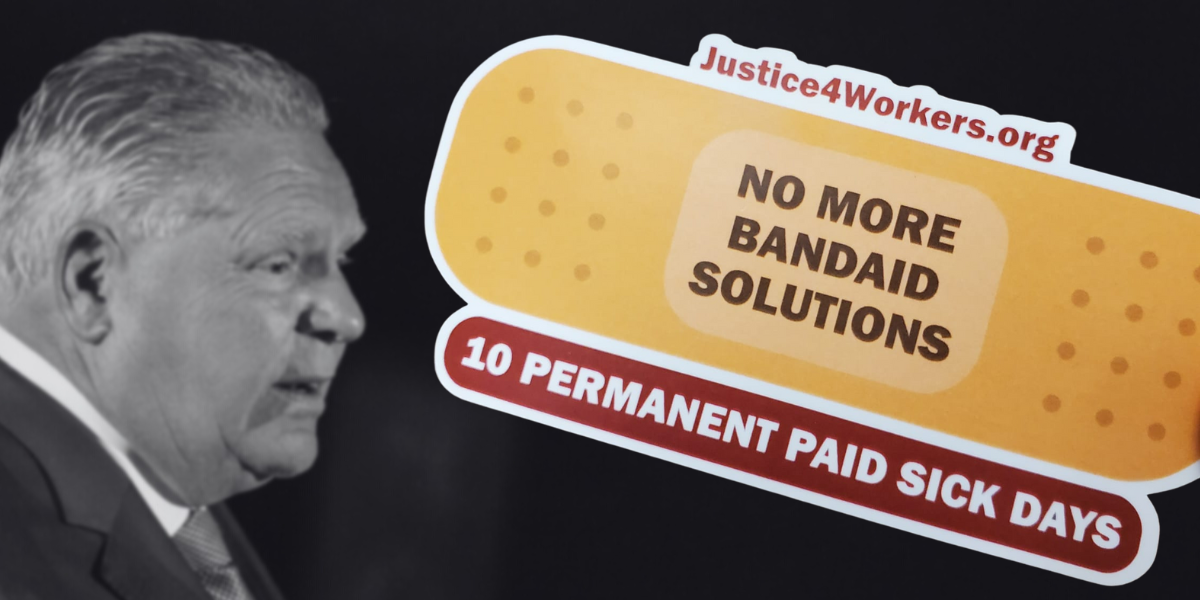 In the middle of the seventh wave and under pressure from the decent work movement, the Ford government announced another extension of the Worker Income Protection Benefit (WIPB). But by simply extending the deadline without adding paid sick days, the government is diluting paid sick days until they finally cut them again. But if the movement can force the government to provide temporary and inadequate paid sick days, it can also make them permanent and adequate.

After cutting paid sick days before COVID-19, and opposing paid sick days for the first year of the pandemic, the Ford government was forced in April 2021 to promise the best paid sick days in North America. Instead it introduced the WIPB, providing three temporary and government subsided days restricted to COVID-19. Since it was introduced almost half a million workers have used the program, receiving nearly $200 million. This was crucial for workers without paid sick days—who are disproportionately low-income and racialized—to access the COVID-19 vaccine and stay home while sick.

But this victory for the decent work movement was partial and temporary. Ford only introduced the WIPB under tremendous pressure, and as a way to justify rejecting legislation for 10 permanent and employer-paid sick days, plus 14 during pandemics. In a pandemic that requires at least 3 vaccines, and at least 5 (and ideally 10) days of isolation, three paid sick days is clearly inadequate. Restricting paid sick days to COVID-19 also curtails their use for non-COVID related issues during the pandemic, and commits to cutting them after the pandemic. And making them government subsidized rewards employers who deny paid sick days—who are the same employers who fueled outbreaks from farms to factories and long-term care.

The WIPB was originally scheduled to end after only a few months. It has been extended multiple times, this time until March 31, 2023. This is not only in response to repeated waves of the pandemic but ongoing demands for paid sick days: most recently, hundreds of health providers wrote an open letter calling for 10 permanent paid sick days. Ford was re-elected after promising to “work for workers” and the WIPB extension has been framed with this narrative. As a spokesperson for the Ministry of Labour stated, “With this extension, more workers will be able to take time off when they need it to receive a booster shot, get tested, or care for a loved one who is sick while having the confidence they’ll still be paid. We promised our supports would remain in place as long as they are needed to keep workers and their families safe from COVID-19 — we are keeping our promise and will always have workers’ backs.”

But each extension applies to less and less workers: the half a million workers who have already used their three days during the first year are denied additional paid sick days, so this extension only applies to workers who have not used the program. Each extension also progressively dilutes paid sick days: had the Ford government not blocked legislation last year, workers would have had 10 paid sick days plus 14 during emergencies in each of the past two years—which would have had a major impact on the pandemic by maximizing testing, vaccine access and staying home sick. But instead workers have only three days over two years, which undermines pandemic response.

The spokesperson gave a scenario of a worker needing a booster shot, a test, or caring for a loved one. But this means over two years of a pandemic, a worker with only three days can only get one vaccine, one test and spend one day caring for a loved one—leaving zero days if they actually get COVID-19. Or they can isolate for three days for their first infection and zero if they are re-infected, forego a booster and not take time to care for anyone else. These days are also restricted to COVID-19, leaving workers with zero paid sick days to get a monkey pox vaccine or stay home if infected. Zero days for mental health counseling or additions support. Zero days for cancer screening. Zero days to keep a sick child at home from school if they have something other than COVID. Zero days for the upcoming flu season. Zero days to access primary care during a workday, rather than having to visit an overcrowded emergency department at night.

The inadequacy of the WIPB undermines health and also equity. It is built on the premise that the 58% of workers without paid sick days (disproportionately low-income and racialized) don’t deserve the same permanent paid sick days as the other 42% of workers. It’s also based on financially rewarding employers who deny paid sick days to these workers. And it wastes millions of dollars by paying Deloitte to administer the government-funded program rather than legislating that all employers provide paid sick days.

All the evidence, from before and during the pandemic, shows that employer-paid paid sick days save lives, protect public health and are good for the economy. There’s also legislation waiting to be passed, when NDP MPP Peggy Sattler re-tables her Stay Home if You Are Sick Act that would provide 10 permanent paid sick days. All that’s missing is enough pressure to push the Ford government to support the legislation. If the movement can push Ford from cutting paid sick days to promising the best in North America, it can push Ford from extending an inadequate program to legislating real change.