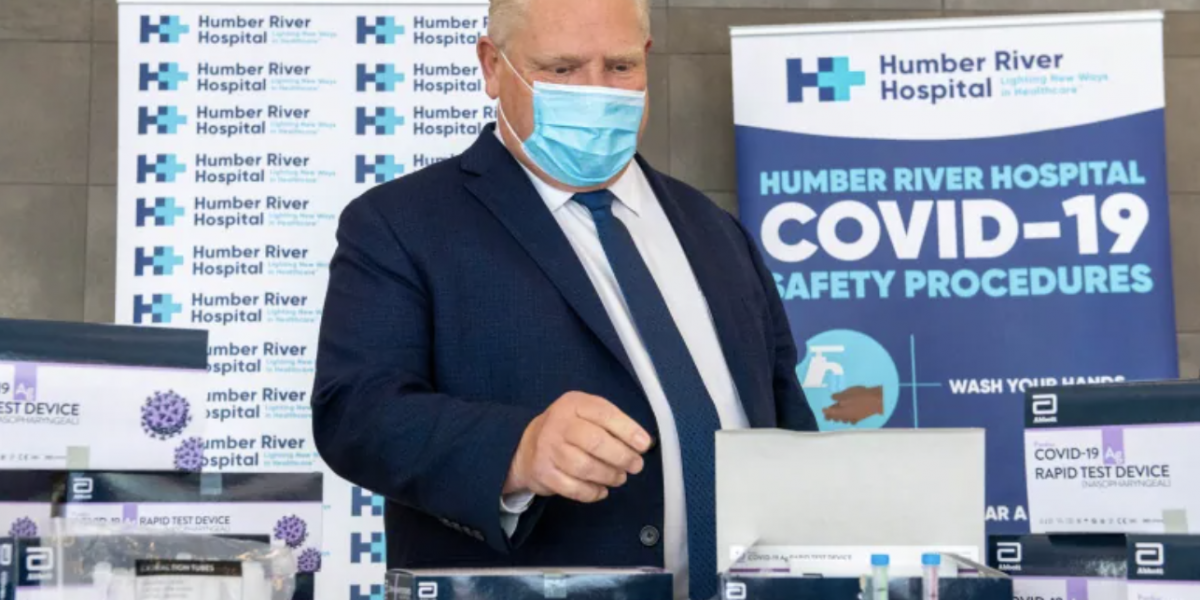 One of Ontario Premier Doug Ford’s first actions in his first term was to cut paid sick days, which fuelled the spread of COVID-19. Ford then promised “the best paid sick days in North America” but only provided three temporary days. Now one of his first actions during his second term is to let these days expire at the end of this month, which amounts to cutting paid sick days a second time. But the decent work movement pushed Ford to reverse his cuts before, and we can do so again.

Over two and half years and six waves, COVID-19 has infected more than 1.3 million people across Ontario and killed more than 13,000. Predictably, COVID-19 spread through workplaces that deny paid sick days—from farms, to factories, to long-term care homes. The health and economic impacts of the pandemic disproportionately impacted migrant and racialized communities, especially racialized women in long-term care, and COVID-19 outbreaks put immunocompromised people at risk. This was both predictable and preventable.

Both the NDP and Liberals put forward legislation that would have enshrined these principles, with 10 permanent and employer-paid sick days plus two weeks during pandemics. So Ford could have fulfilled his promise of providing the best paid sick days in North America by supporting these bills. But he voted them down, and instead set up a program called the Workers Income Protection Benefit (WIPB) that provided three paid sick days.

All credit goes to the decent work movement for winning this reform. Ford started his first term cutting two paid sick days, but had to reverse course and provide three. These paid sick days were crucial to help low-income workers access the first doses of the COVID-19 vaccine. But the WIPB provides far less than what workers deserve.

First, it is not adequate: it only provides three days when the evidence-based demand is 10 plus 14 during pandemics. This inadequacy has worsened over time, as the program has been stretched over subsequent waves without actually adding more paid sick days. This is the equivalent of giving a third of a prescription of antibiotics and then asking patients to use them for multiple episodes of infections. Predictably, while there was widespread uptake of the initial doses of the vaccine, inequity has re-emerged for the third dose.

Second, these paid sick days are not fully accessible: they can only be used for COVID-19. The emergence of monkeypox during the sixth wave shows how short-sighted it is to restrict paid sick days for one health issue, even during a pandemic.

Third, these sick days are not fully paid by employers: they are government funded and privately administered by Deloitte. The result is that the WIPB subsidizes employers that deny paid sick days and paid another private company $43.7 million to administer them, rather than just legislating that all employers provide paid sick days.

Fourth, the program is temporary. But for those with long COVID the health impacts of the pandemic are continuing, and public health experts are predicting a seventh wave in the fall. Even after the last wave of COVID-19, paid sick days are essential for health and equity. By opposing permanent legislation and instead setting up a temporary program, Ford has committed to denying workers paid sick days yet again. This is a slap in the face to all the essential workers who kept us all alive during the pandemic—from farm and grocery workers, to factory and delivery workers, to care workers.

Return to ‘normal’ vs building a new normal

COVID-19 will not disappear by the end of July, and neither should paid sick days. On the contrary, paid sick days should be expanded. A health pandemic recovery requires decent work for all. This is crucial for health and for equity, especially as we head into a recession which will disproportionately affect the same workers who are denied paid sick days.

But simply extending the WIPB again is not a solution, because this will only further dilute three temporary paid sick days. Instead, the government needs to legislate the effective paid sick days that health workers and labour advocates have been calling for—that means 10 permanent paid sick days plus 14 during pandemic, which are universally available to all workers, immediately accessible for any health reason, fully paid by employers and backed up by government enforcement.