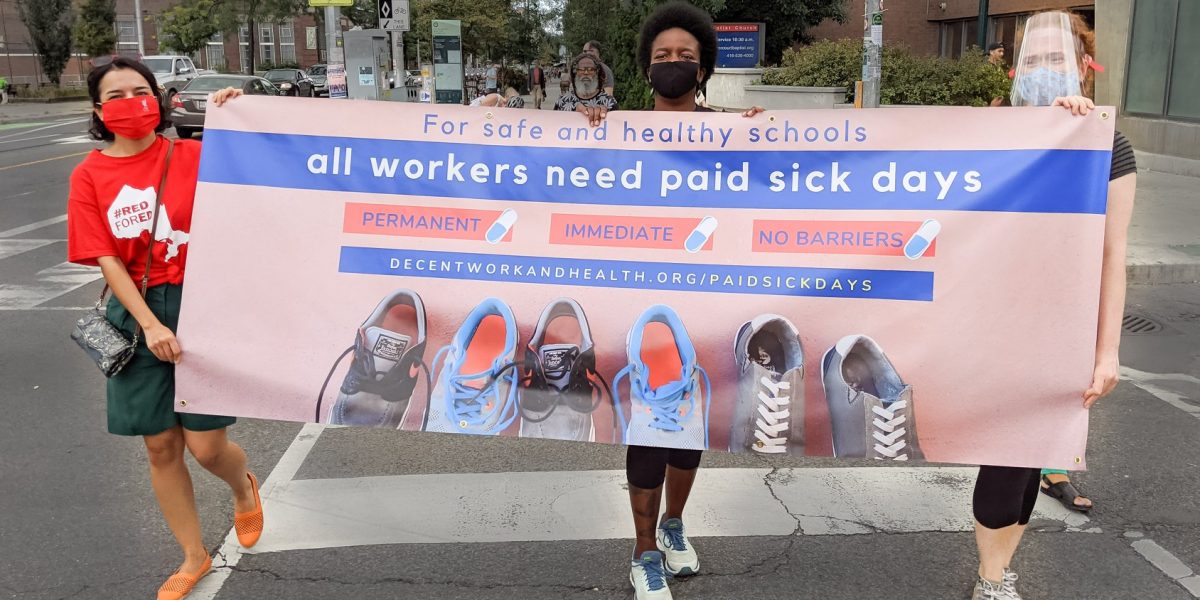 One year into a deadly global pandemic and one of Canada’s worst public health crises in recent history, no government has yet taken the step to legislate paid sick days for workers.

Data shows that 58% of workers in Canada do not have access to paid sick days. This number rises dramatically to over 70%, for workers in low-wage and precarious jobs. These are jobs, many in servicing and front-line sectors, where female-identified and racialized workers are significantly over-represented. Thus, it comes as no surprise when cities like Toronto report that racialized people make-up 80% of COVID-19 cases. The lack of access to paid sick days is an issue of racial and gendered injustice.

We’re in a moment where the demand for paid sick days has widespread public support. From major city mayors to public health officials and medical officers at all levels of government to local labour councils, the call for permanent, employer-paid sick days for all is gaining mass support. This has put governments of all stripes and at all levels under immense pressure to take action–especially in the context of consistently high COVID-19 infection rates, major challenges to the vaccination plans and increasing numbers of workplace outbreaks.

This is a union issue

A number of front-line health workers who have died of COVID-19–including cleaners, PSWs, or nurses–have been unionized workers from SEIU, CUPE, Unifor, LiUNA, ONA, and others. It is high time for unions and the broader labour movement to not only support but take the lead in the fight for paid sick days. The demand for paid sick days is one that impacts the majority of workers in the country, has broad public appeal, and contributes to the health of workplaces and communities.

Organized labour’s support in the struggle for paid sick days will also have direct material benefits to unions. Despite common belief, many unionized workers both in private and public sectors, particularly those in casual and part-time units, do not have access to paid sick days.

Winning employer-paid sick days through employment standards would have an immediate impact on the hundreds of thousands of union members who do not have adequate access to paid sick days. For frontline unionized workers, who are disproportionately racialized, winning paid sick days would not just be a win, it would save lives.

When employment standards are improved this helps strengthen the hand of all workers, even those who already have paid sick days. Expanding access to paid sick days not only provides all unionized and non-unionized workers with a basic essential benefit, it will also provide openings and opportunities for unions to negotiate more benefits and protections for their members by raising the floor across provinces.

It is harder for employers to attack the paid sick days of unionized workers if the baseline is all workers having access to paid sick days. Time and again in negotiations, especially for public sector workers, employers aim to pit workers and the public against each other by pointing to the benefits unions have won that the public doesn’t have. Unionized teachers are regularly scorned by the government and lambasted in the media for having paid sick days when other workers’ don’t. Raising the floor on paid sick days helps blunt this attack and makes it easier to build solidarity for unions to set the bar for workplace rights higher. Fighting to expand paid sick days can show why workers should organize and defend unions.

But solidarity between unionized and non-unionized workers is something we have to build, not expect as a given. How unions act in moments like this matter. If unions are seen as fighting for the entire working class, not just their narrow sectoral interests, it can help bolster the confidence of all workers to fight. Unions have the resources and power to not only shape the discussion around paid sick days but put real pressure on the government and the big business lobby.

Unions need to marshal their resources for a public fight for paid sick days, taking to the airways and online to reach as broad an audience as possible conveying the message that the government needs to legislate paid sick days now. Fighting for paid sick days can show why we need unions, and can itself be an opportunity to organize within unions.

But this can’t just be a fight waged by union leaders. Union members are critical to winning this fight. Union members must have access to the arguments about why paid sick days matter for all. Rank and file workers need to organize themselves to phone their MPPs, sign petitions, and where possible engage in more militant workplace actions such as sick outs and collectively refusing the right to unsafe work.

Hammer the bosses and the Tories

In Ontario, Doug Ford’s government is in crisis. As case counts remain high the media has been relentlessly asking why the government is refusing to bring in paid sick days. Ford is trying to pass the buck saying the Canada Recovery Sickness Benefit should be filling the gap. But the CRSB is not just inadequate it is the wrong approach. Unions can help ensure that the fight for paid sick days doesn’t backslide. That the political parties in Ontario supporting paid sick days such as the NDP and Liberals, echo not undercut the call for 7 permanent paid sick days and 14 during the pandemic. Unions can also make the forceful argument that employers not the public should bear the cost of basic workplace rights such as paid sick days.

At this moment fighting for employer-paid sick days for all is an opportunity for the union movement to raise standards for all workers while also exposing the Tories and the bosses’ cruel agenda. There is much to gain for unions and little to lose.

To join the fight for paid sick days you can: