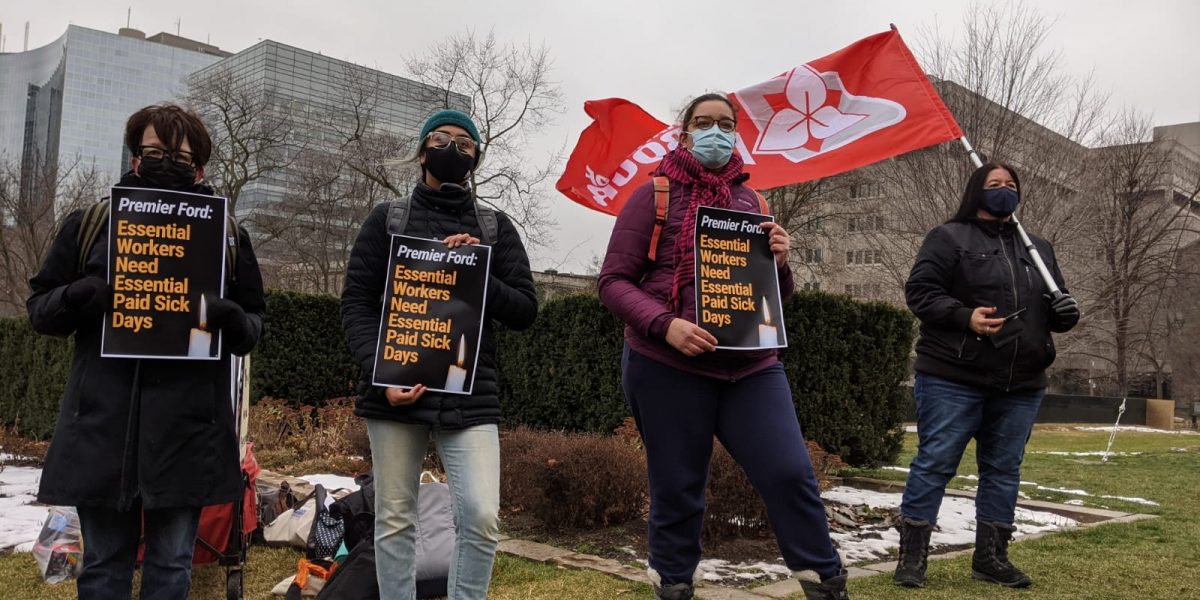 The Tories and business lobby really don’t want this to happen. But they are on the defensive. An increasing number of public health experts and workers are being vocal about the need for paid sick days. Some in the Tory ranks like Patrick Brown and John Tory have come out for paid sick days.

The mainstream media, Toronto Star, CTV, CBC, Global have picked up on paid sick days, repeatedly emphasizing the need for them, and noting how the Canadian Response Sickness Benefit is inadequate. Even local rock radio has been mentioning the lack of paid sick days as a failing of Ford. #FordfailedOntario and #FordFailedThePeople has been trending on social media. And today the Big City Mayors, representing mayors from the 29 largest cities in the province, issued a call for paid sick days.

A government in crisis

The government is in crisis. Their base is divided and disoriented, with a significant portion of them being anti-mask and anti-lockdown. The government’s entire strategy to fight COVID-19 is in shambles. They opened schools in the fall without adequate preparations and spending – contradicting what teachers and parents were demanding. When case counts started to rise in October Ford told the public not to worry, “the numbers were moving in the right direction.” This contradicted public health officials who were warning of significant rise.

Partial lockdowns in the GTA and other hotspots failed. A provincial lockdown order was delayed over the Christmas holiday. Cases increased dramatically, yet the government refused to close schools, only to reverse itself. The “Iron Ring”, supposedly protecting long-term care residents, has collapsed as deaths and case counts exceed last spring’s deadly high. The vaccine rollout has been painfully slow, the government even paused vaccines for several days over the holiday. The government is trying its best to look as if it is doing something by issuing a vague stay at home order. But this is simply window dressing. They have provided no supports for workers, renters or parents and have outlined sensible path forward. The reality is they have no plan or strategy beyond shifting the blame of the crisis onto individuals and hoping cases counts level off as the vaccine takes hold.

But the public is having none of it.

As the government’s plan to fight COVID-19 collapses people are open to alternatives such as paid sick days, which even had wide support before the pandemic. The campaign by Fight for $15 & Fairness, the Decent Work and Health Network and the OFL has done the ground work on this front for years (publishing studies, winning paid sick days in 2018, building up the talking points and training workers to organize around the issue).

But the window for winning this reform won’t remain there forever. Ford and the government want to hunker down and weather the crisis of exploding cases. They hope the cases to level off and the vaccine takes hold. In the meantime they are happy to blame individuals for the spread.

The entirety of the left needs to press on this right now. Unions should blanket the province with ads. Union and non-union members should be flooding MPP phone lines, emails and social media with the demand for paid sick days. Whether it be a talk radio show, a letter to the editor, or an online community event every opportunity to raise the demand for paid sick day should used. Share the call for paid sick days on your social media, ask other to do the same. Where it is possible in person actions, such as MPP office visits or car caravans, should be organized. Educate, agitate and organize.

It is hard to win any positive reform under this government, but there is a chance right now. But this only works if we leverage all our possible networks. If we do that and lose, well it only increases the chances that we damage Ford and win it down the road.

Politics is about seizing moments. This is one of them.

Register for the Fight for $15 and Fairness / OFL meeting organizing meeting on January 19 at 7pm EST to get involved.