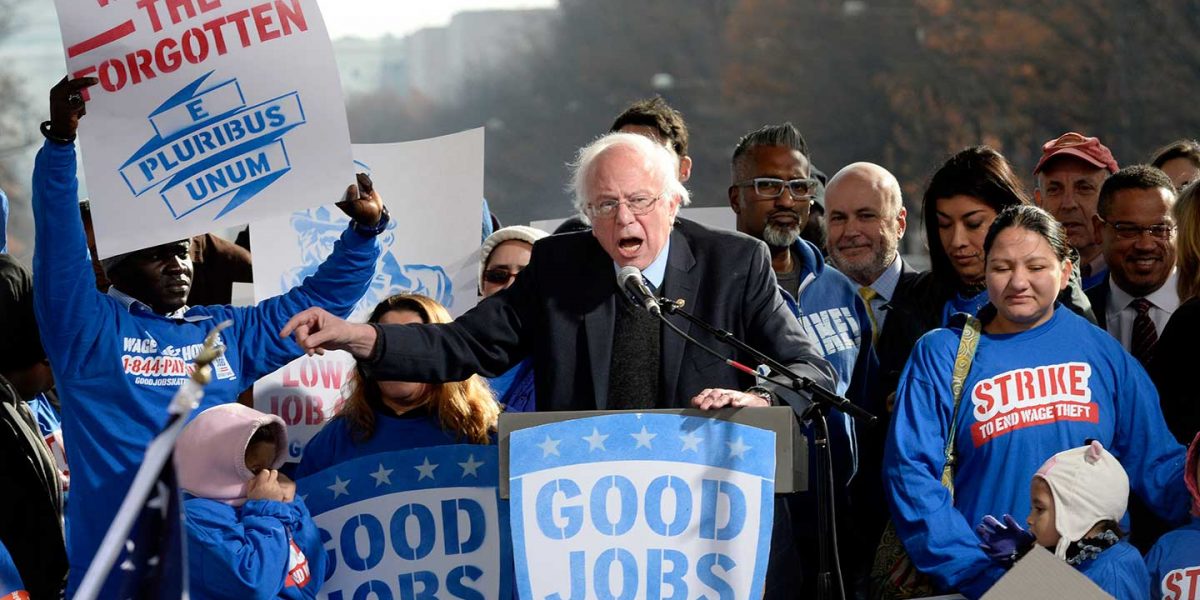 With the Iowa caucus descending into chaos after technical errors and vote counting irregularities, obscuring the result of a Bernie Sanders victory and a resounding defeat for establishment favourite Joe Biden, it has become more apparent than ever that the establishment in the Democrats, the mainstream media and the halls of economic power on Wall Street want to do everything possible to prevent a Sanders nomination and potential presidency.

Leading up to the vote, the campaign of Bernie Sanders, which had been all but declared dead in October after he suffered a heart attack, was surging. Polls showed him leading in Iowa, New Hampshire, California and closing the gap in the so-called Biden firewall states of South Carolina and Texas.

The prospect of Sanders, a democratic socialist, winning the party’s nomination and the election appears to have encouraged the Democratic National Committee (DNC) to change its rules for candidate debates (after promising they would never do so) in order to allow former New York Mayor Michael Bloomberg on stage—after he donated to the DNC and self-funded hundreds of millions of dollars in TV ads to support his late candidacy. There were also rumours that the DNC was preparing to change its convention rules, allowing unelected party bigwigs (superdelegates) to vote on the first ballot, something that had been negotiated away after the last convention. Although DNC chief Tom Perez has denied it, there is a strong feeling that party apparatchiks are preparing to rig the contest to stop Sanders.

The worry seemed to be confirmed as the Iowa caucus descended into chaos. For the first time ever, the state party officials decided to use a special app to report results from the various locations holding votes, but very quickly it appeared that the app was not working and results were not appearing. Despite no results, centrist darling Mayor Pete Buttigieg declared victory despite every indication being that Sanders would win the popular vote and likely edge out Buttigieg in delegates. When it became known that a consultancy firm close to Hillary Clinton’s losing presidential campaign, named Shadow (I kid you not), had designed the app and that Buttigieg’s campaign had given money to the firm, people’s worst fears about a DNC stitch up seemed to be confirmed.

Although conspiracy theories may give too much credit to centrists, there is no doubt that the screw up and the fact that the result totals are still not totally released yet, has denied Bernie an important victory and allowed Biden to hide an embarrassing result. It has also given a needed boost to Buttigieg’s campaign, who had a record fundraising day following the Iowa primaries. Despite the bump in media coverage and fundraising Buttigieg is still unlikely to win the nomination as he lacks any infrastructure outside of Iowa and has little support among African Americans voters.

Despite the chaos, there is no doubt that the Sanders campaign, as it did in 2016, is reshaping the landscape of American politics, offering a vocal expression of the anger towards a capitalist system that has failed American workers for decades. With income inequality at all time highs, workers rights largely eroded, and establishment Democrats (once viewed as the party of working people) having implemented and supported the policies that have created the economic and social turmoil that Trump exploited in 2016, Sanders’ consistent message has resonated with large swaths of the American population.

Although the early stages of the campaign had liberal Senator Elizabeth Warren garnering some support among progressives, her equivocation on Medicare for All began to see her popularity wane and many of her supporters returning to Sanders. Combined with the endorsements of radical, young and racialized congresspersons Alexandra Ocasio-Cortez, Ilhan Omar and Rashida Tlaib, part of the wave of more left wing voices inspired by Sanders’ presidential campaign against Hillary Clinton who won office in 2018, Sanders has rebounded and appears to be one of if not the front runner for the party’s nomination.

In addition to his poll numbers showing increased support, the campaign has also made significant improvements in one area it was weak in 2016, namely support from minority communities and women. Sanders has the most support of all the candidates among the Latinx community, he has the strongest support among African Americans under the age of 50, and has made serious gains among older African Americans who initially appeared to support Biden. A very striking example of how the campaign has consciously built solidarity among people of colour is the amazing outreach they did among immigrant meat processing plant workers in Iowa, having permanent staff leafleting and talking to workers every day as they went to and left work.

The campaign has also used its networks to build social movements in a way no other campaign has ever done. It used the massive email list to warn immigrants about ICE raids and to encourage people to support picket lines of striking workers.  While all candidates go to picket lines for posterity sake, Sanders is the only one that has harnessed the power of his campaign to build solidarity beyond a photo op.

After decades of disastrous centrist campaigns and disappointing Democratic administrations, the return of militant socialist political discourse was not something many expected prior to 2016. Sanders was a well regarded stalwart of ideas that the political establishment had long abandoned and even relatively mild reforms he was proposing (like single-payer health insurance) were deemed way too radical. That Sanders’ campaign caught on fire in 2016 was a shock but it also exposed the kind of destruction that the 2008 economic crash had caused. Millions of college students and recent graduates were leaving school with massive debts and bad job prospects. Millions were declaring bankruptcy after medical expenses left them with massive debts they could never repay. Millions saw their home values destroyed and mortgages foreclosed on, while the Obama administration bailed out the banks and did little for vulnerable homeowners. Sanders spoke to that and shockingly almost defeated what was expected to be an easy coronation for Hillary Clinton.

That the fervent support for Sanders withstood four years of continued attacks against him and his ideas speaks to how deep the radicalization has been. While other candidates fluctuated up and down in the polls, depending on the whims and fancy of voters shopping around, Sanders’ base of support was rock solid. And among his supporters there is a take no prisoners approach to politics, unwilling to accept the medicine that centrist Democrats have been insisting we swallow for decades. Although some criticize the Sanders online supporters for being too aggressive, in many ways this support has assured that the campaign hasn’t been destroyed by the type of frivolous and disingenuous attacks that Jeremy Corbyn faced in the UK. And when Sanders needs to be pushed on issues (like taking an unequivocal opposition to the coup in Bolivia) those same supporters hammer him to do so. This active and vocal swarm of supporters is one of the reasons that Sanders has actually tacked left since 2016.

But in addition to the online support, which is often overstated in its influence, it is the sheer organizational might that his campaign has created. The number of volunteers canvassing for him, making phone calls and texting potential voters, going to rallies and donating to his campaign is only comparable to Obama’s 2008 campaign. And unlike Obama, who wound down his massive network after winning the presidency, Sanders has repeatedly said that he will count on this movement to mobilize support for his aggressive legislative agenda, acknowledging that without the weight of social movements his ability to get reforms passed will be impossible.

The next few months are going to be a rollercoaster as the Sanders campaign gains momentum. If the campaign ends up winning New Hampshire and Nevada and does well in South Carolina, Super Tuesday will be monumental and garner enormous excitement.

That said, the political and economic establishment will rev up its attacks, digging up every spurious charge to undermine his candidacy. The media spent months ignoring him and now will ramp up the attacks in ways we never saw. The pundits may be embarrassed of Trump but they are terrified of a Sanders’ presidency and would frankly prefer Trump’s re-election than the prospect of a socialist in the White House. The Democratic establishment also insist that as a socialist Sanders is unelectable and that having him as a nominee would secure a Trump victory. But as Sanders said in May 2016 in the lead up to last electrion, “Right now, in every major poll, national poll and statewide poll done in the last month, six weeks, we are defeating Trump often by big numbers, and always at a larger margin than Secretary Clinton is.” When Clinton beat Sanders for the Democratic nomination she lost to Trump, who could pose as the only candidate against the status quo–as reactionary as his politics were. A Sanders defeat, and his endorsement of the Democratic establishment, could help Trump repeat his 2016 victory.

The key will be the kind of social movements that continue, in either scenario. A Sanders win could potentially demobilize folks if they assume electing a socialist will in itself bring change, or a Sanders loss could lead to demoralization if it’s assumed an electoral loss means the end of the movement. But if his supporters channel the enthusiasm and energy of the campaign into mass mobilization, increased unionization, and direct conflicts with capital, the return of class warfare in the United States is on the agenda and the prospect of workers actually winning is there for the taking.