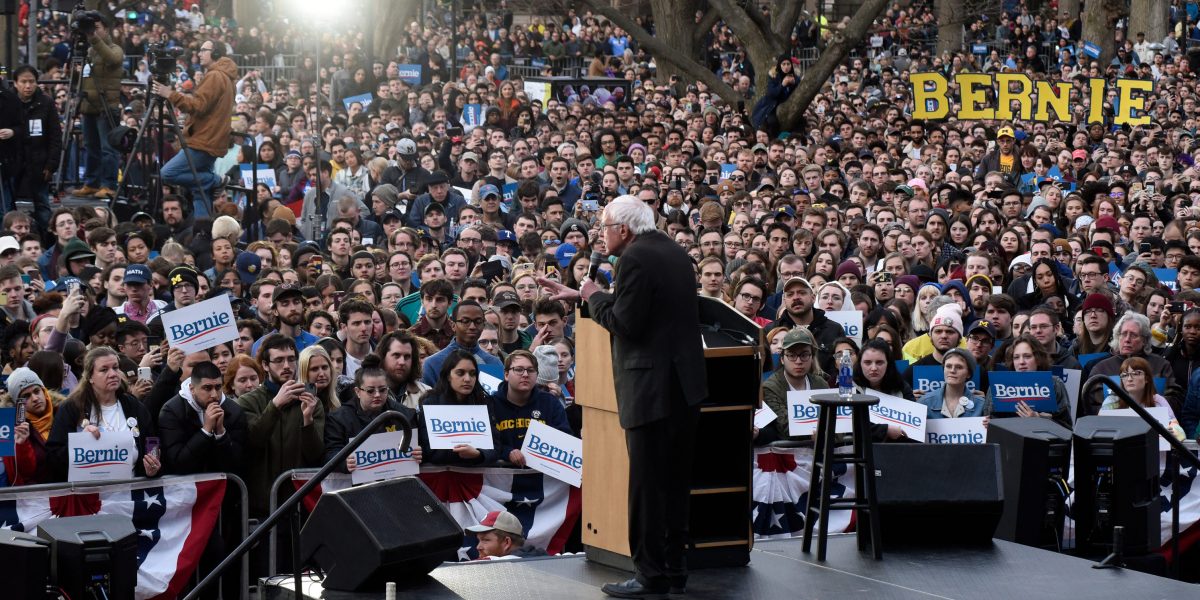 Two weeks ago the Democratic establishment was losing its mind after Bernie Sanders handily won the Nevada Caucus, securing a third straight contest where he had won the popular vote. Bernie had secured huge support among Latinx and youth and the once insurmountable lead that former Vice President Joe Biden had among African Americans appeared to be dwindling, with some national polls actually showing Sanders leading nationally among this key Democratic Party constituency.

How quickly things have changed. After powerful South Carolina’s congressman Jim Clyburn endorsed Biden days before his state’s primary, Biden roared to a decisive victory. Within a day, other centrist candidates for the Democratic nomination Pete Buttigieg and Amy Klobuchar announced that they were dropping out to support Biden. The next day, 24 hours before Super Tuesday, Beto O’Rourke endorsed Biden at a big rally in Texas. Media commentators went all in pushing the Biden narrative as the candidate to not only stop Bernie but most able to defeat Donald Trump. In a shift in popular sentiment never seen before, Biden zoomed up the polls and scored ten state victories on Super Tuesday’s primaries, including states Bernie was expected to win like Maine, Massachusetts and Minnesota. Although Bernie managed to win the delegate rich California, he not only fell short of expectations of being ahead by hundreds of delegates but is now behind Biden in that all important count.

Despite Elizabeth Warren also dropping out, her voter base is not necessarily shifting to Bernie and polls are showing the potential of a Biden romp as many voters want to get the primary done with to take on Trump in a general election.

Two weeks ago, the left was seriously contemplating the possibility of a democratic socialist presidency and trying to prepare folks with the positives and pitfalls of such an outcome. Now we face the possibility of the most exciting political campaign in decades crumbling in the face of the Democratic Party establishment reasserting its prowess. Although endorsements from the Working Families Party and progressive icon Jesse Jackson are nothing to scoff at, Bernie’s ability to comeback is in serious doubt.

After Super Tuesday, an endless cacophony of opinions have hit the airwaves and twitterverse trying to explain why Bernie appears to be falling short of the nomination. Some have suggested the problem is his supporters, who are seen as too aggressive, accused of harassing opponents online. Others have pointed to his inability to make deals with the establishment, offering positions to more centrist voices to lessen fears about a Sanders presidency. There have also been rehashed lines of attack that Bernie’s campaign is too white and could not make inroads among African Americans, who voted overwhelmingly for Biden on Super Tuesday.

Much of these suggestions are questionable. Bernie supporters online can be overly aggressive at times and there are always bad players in the world of Twitter exchanges. There are important lessons that will come out of this campaign on how to grow beyond the sizeable minority that he has built around the presidential bid and how to communicate to the layer of people beyond supporters. But that being said, there is no actual evidence that Sanders supporters are particularly worse than other campaign supporters and surrogates. A large statistical survey of the question of “Bernie Bros” comes to different conclusions in fact, suggesting that Sander supporters behave pretty much like everyone else’s. Although some suggest that the angry tone of his supporters has pushed people away toward Biden, one has to wonder why a mean tweet outweighs the social and political implications of nominating the former Vice President and whether anything could have persuaded those folks towards Sanders.

In terms of whether Sanders should have played nicer with the establishment, such a sentiment completely misunderstands the nature of his movement. Sanders is not a powerbroker type politician who wants to curry favour from establishment politicians. He’s not about playing nice with those in power in hopes for crumbs. The reason he ran and the reason millions have rushed to his campaign is because he has no time for the backroom trading politics that has made so many people completely cynical about politics. He never had the power to have Barack Obama make phone calls to encourage his adversaries to quit the race (as presumably happened to encourage Buttigieg and Klobuchar to drop out). All Bernie has is the mass movement that has tried to out organize the establishment in hopes of upending their grip over the party machine. There was no deal or olive branch that could have been made to convince those wedded to neoliberal centrism to give the keys to the car to a democratic socialist and his radical movement.

There is some truth that Bernie has not been able to make in roads with African Americans, especially those over the age of 35. Although he appointed key Black figures as surrogates like Briahna Joy Gray and Nina Turner, winning African American voters, particularly in the Deep South, has proven to be a key weakness. That said, the 2020 campaign is completely different than 2016 in winning over Latinx voters, who have flocked to Bernie in huge numbers, allowing him to be competitive in states like Texas and win California by a huge margin.

Although it is worth considering all these critiques more closely, arguably no matter what was done—how Bernie ran his campaign, or how his supporters behaved—the end result may very well have been the same. If anything, the campaign has exposed the limits of running a radical campaign in the midst of low level of struggle and little organizational infrastructure on the left. The 2016 campaign gave a boost to certain struggles and since then we have seen some high profile strikes among teachers and tech workers, but these are still very small in number and impact. The Democratic Socialists of America (DSA) has become an organization of 60,000 dues paying members, but that is still relatively small in a country of 300 million people. Where most active, like SF East Bay, socialists have played an important role in winning the vote for Bernie. But the kinds of roots socialists are building through the DSA are still too few and too tiny to make enough of a difference in a national electoral campaign.

Not all is lost

The biggest threat right now is demoralization and disorientation, especially after the hope of a Sanders presidency felt so within our grasp. Millions of people donated money and time to try to change the political landscape and elect someone who ran against a corporate agenda that has dominated American politics from its inception. To have that hope dashed, especially in the shadow of climate catastrophe looming over us all, will break many hearts and leave many activists wounded, unsure what to do next. Sanders outpolls Trump and has mounted the biggest challenge to the Democratic establishment in a generation, and it will be a bitter pill to swallow when Bernie endorses Biden—and more bitter if Biden then loses to Trump.

That said, we should not dismiss what was achieved, nor underplay the significance of what the Bernie campaign has done to shift the political landscape in the United States. For decades, the best the left could hope for was an aggressively neoliberal Democratic party that loved war and welfare reform, while holding the Christian fundamentalist Republicans at bay. Ralph Nader’s campaign for president, which was anti-corporate but not socialist, was exciting but could not muster even three percent of the vote.

The two Bernie campaigns have dramatically shifted the debate. For the first time in generations, millions of Americans are talking about socialism and approving of it. In exit polls during Super Tuesday in Texas and California, a majority of people had positive thoughts about socialism. In terms of the Medicare for All debate, in every state—even those that Biden won handily—voters supported the idea of public health care to replace the private insurance model.

In addition to the ideological shifts that the Sanders campaign has helped push, there has also been a mass training of hundreds of thousands if not millions of organizers and activists. Although we can debate whether or not the skills people developed canvassing for Sanders can translate into other forms of organizing, the fact that people went to meet strangers and tried to persuade them to join a movement is something the Left can build from. This campaign has strengthened friendships and networks based on political radicalism and if kept together through organization can lead to a flourishing of a socialist left in the United States.

This is of course is the key question. Will this mass of activists and self-identified socialists return to the background, disappointed that they could not win over enough voters in the face of mass economic inequality and environmental catastrophe? Or will they take their anger into building a mass socialist alternative that can challenge the ruling class establishment, not only at the ballot box but also the streets and workplaces?

Corbyn faced hostility and was undermined even within the Labour Party, but Sanders took on the Democratic Party—backed by corporate America. If there is a lesson to be learned it is that organizationally, the Left in the United States is weak. The union movement is a shadow of its once powerful self, socialist organizations have grown in size but still not enough to reach all corners of American society, and the alternative media remains limited in its ability to shape the political debates. That said, since 2016, all these elements are stronger than they have been in a long time.

The DSA, which has been the most significant beneficiary of the surge in socialism’s popularity, threw its entire organizational muscle into the Sanders campaign and, where large enough, made a significant difference. But what lessons it learns from the experience and its ability to recruit the thousands that are around is what matters now. Will it remain just an organization focused on challenging Democratic establishment candidates in primaries or will it also focus more resources into non-electoral campaigns that will be key to build resistance to either a re-elected Trump administration or a Biden-led one? Will it make efforts to build in more hostile territories like the Deep South, where long ago the Communist Party USA played a huge role in labour militancy and anti-racism work in the 1920s and 1930s?

If you are a revolutionary socialist looking to tap into the anger of the moment, where do you best situate yourself? Inside the DSA or outside building something independent of the admittedly ideologically looser DSA? These are the questions of the moment and how socialists (both revolutionaries or reformists) react to this disheartening defeat is key.