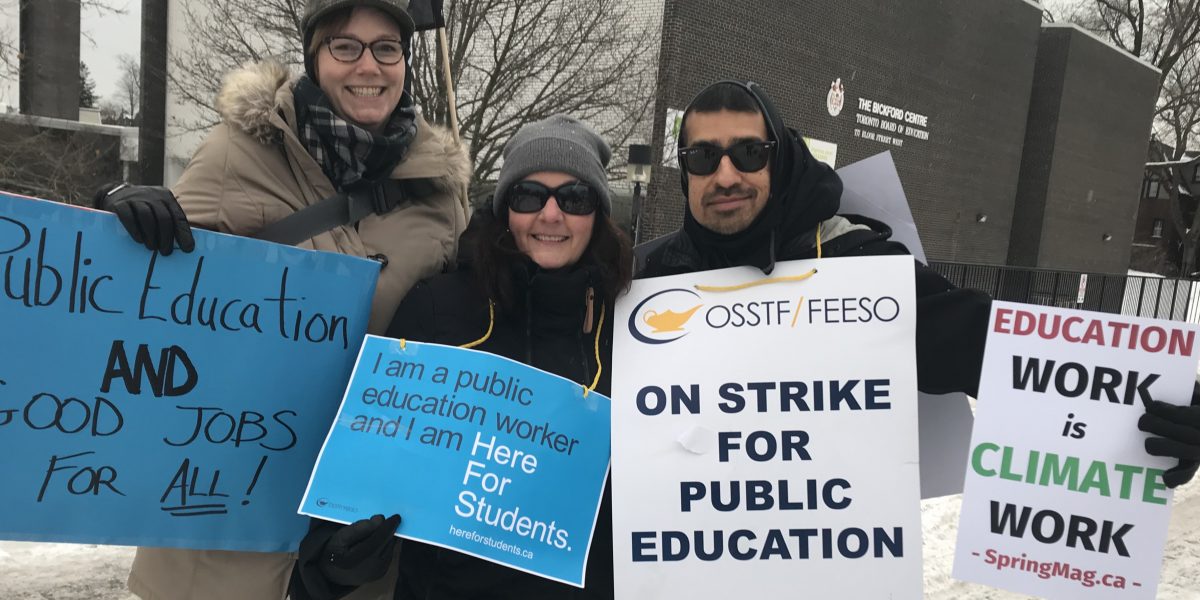 As horns honked during the morning rush hour along Bloor Street near Christie Pits, teachers waved back at their supporters.  The West End Alternative School located at the Bickford Centre near Bloor and Christie was the location for a joint picket by nine of the alternative high schools in Toronto, and formed part of the weekly one-day strikes by members of the Ontario Secondary Schools Teachers Federation. Recently members of the other provincial teachers’ unions have taken job action, including the Elementary Teachers Federation of Ontario, the Ontario English Catholic Teachers Association and the Association des enseignantes et des enseignants franco-ontariens.

Spring caught up with three teachers on the line to ask about the issues and what teachers think it will take to win against Doug Ford.

Lisa said, “This hasn’t happened in decades, this kind of joint action. I’ve worked over thirty years to see all the unions out together. This isn’t just about class sizes, it’s about protecting the very future of public education. Those currently in grade ten and up might be relatively unscathed, but after that, students will really feel the impact of increased class sizes and decreased student support services.”

Another teacher, Harriet, explained: “One issue is we have adult day program teachers and they don’t get paid anywhere near what we do, and they have few to no benefits, and no class size caps. Also underpaid are all the important personal support workers, youth workers and child and youth counselors. The government has skewed the conversation on teachers, but we need to improve the whole system, including special needs supports.”

Ravi added “It’s very important to make a stand and to think of the future, whether it’s education or the climate.  We have to invest in the future we want. We need to have a different (education) system than what they have in the U.S., which is where the Tories are taking their inspiration from. If our education assistants get a raise, it will be by only $0.25 an hour, but all the government talks about is the top salary teachers get after ten years. They ignore our low-end salaries and the costs we’ve faced to educate ourselves.”

Harriet added: “In the alternative schools we support students who are struggling with homelessness, social, economic and health issues, poverty, abuse, discrimination. They have had horrible experiences at school. They even need food from schools. Instead they are seeing their services cut, for example from mental health counselors – going from availability in our school from one and a half days a week to a half day a week. Also there is less access to the testing needed to assess student learning needs and identify needed supports.  Without these supports, the students face a terrible situation if they want to go to college and especially university. So we should also be including things like free transit for these kids, bargaining ‘for the common good’, including transit fares in our bargaining.”

To win, Ravi explained: “Parents are often the most listened to, so they should contact their MPP, Ford, and visit the picket lines which we tend to see more from parents at elementary schools where they have more frequent, day-to-day interaction with teachers.”

For Harriet, the key to win is in mass demonstrations by all the unions. “While we have a relatively radical union leadership, that understands the drive for privatization that is behind Fords’ actions, they still bargain in the top down way within the framework we have. But what we need is more self-organizing (by ordinary teachers). In April 2019 we had a huge rally and teachers came here from all over Ontario. So we know the will is there.”