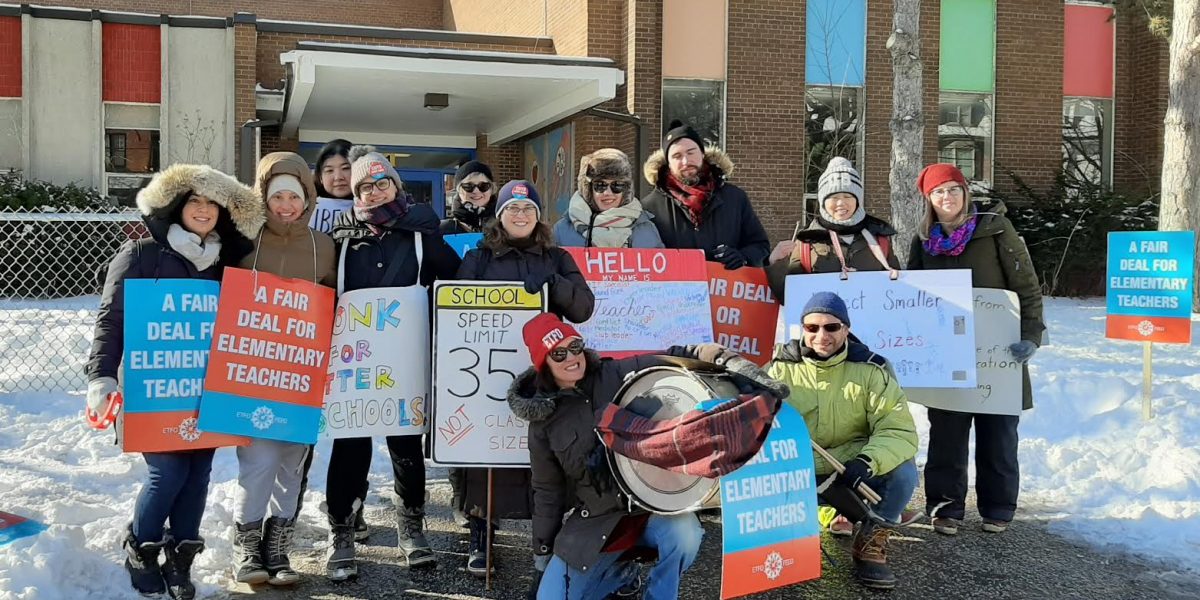 Elementary school teachers in Toronto, York, and Ottawa-Carlton staged a one-day strike on Monday, hoping to pressure the Ford Government into abandoning planned cuts to education funding. For months now the Elementary Teachers’ Federation of Ontario (ETFO) has been in contract negotiations. The government is pushing for increases in class sizes, a freeze on teacher compensation, and is refusing to commit to keeping full-day kindergarten.

“The government doesn’t care how full our classrooms get,” says Pamela, a teacher picketing outside of Kensington Community School in Toronto. “They know that putting kids with severe behavioural problems into overcrowded classrooms is dangerous, for students and teachers, but they push for it anyway.”

In recent years teachers have complained of a dramatic increase of violence in their classrooms, which many blame on decreases in special needs resources and a lack of educational assistants.

Overcrowded classrooms are a consistent complaint among teachers on the picket lines. Joe, who now works as an occasional teacher for the Toronto District School Board, expressed what many teachers seem to feel:

“I’m sorry, I just can’t teach 28, 29, 30 kids to read at the same time. Safety is a big issue, sure, but just from a practical perspective you can’t spend any individual time with that many kids. If they’re struggling they’re out of luck under those conditions.”

Currently the average class size for grades 4 to 8 is limited to 24.5 students, but this is only a schoolboard-wide average. This means that individual classes can exceed that limit, sometimes dramatically, with some classrooms having more than 30 students.

Other teachers expressed concern about chronic under-staffing, particularly when it comes to support-staff like social workers, counsellors, and educational assistants. Rebecca, who was picketing at the Lord Landsdowne school in Toronto, said that in some cases these professionals were only available once every five or six days:

“Not every kid grows up in a nice home, with proper care and the attention they need. Some kids have rough lives, and I can’t get any support for them. My social worker is only here every other week, and when she is here she’s so busy she can’t get through everyone.”

The Ford government has previously made controversial cuts to special needs funding, and drew particularly heavy criticism over a plan to cut funding to programs for children with autism — cuts they were forced to withdraw after widespread opposition.

A legacy of cuts

One teacher at the Clinton Street Junior Public School worried about how these proposed funding cuts would interact with past cuts made over the last 15 years:

“It just feels like we’re going backwards, you know? They cut the number of educational assistants, people who help students with behavioural problems or special needs. Then they put all of those students into normal classrooms, instead of putting them into smaller classes with special resources. Then they start increasing the number of kids in those classrooms. It can’t keep going like this, something has to give.”

The current contract negotiations follow earlier rounds of bargaining between teachers unions and the government where tensions ran high. In the most recent of these, in 2012, the Liberal government imposed a contract on the teachers. This decision was later ruled illegal by the Ontario Superior Court. These contracts lacked many of the protections for class-sizes and working conditions that unions were seeking, and may have paved the way for the Conservative government’s current round of funding cuts and class-size increases.

Negotiations between the four teachers’ unions and the government are ongoing. This is the first time in 20 years that all four of Ontario’s teachers’ unions have been in a position to strike at the same time.

Many parents expressed support for the teachers – honking their horns, bringing coffee, or just standing and talking about problems that schools are facing. One mother biked to multiple picket locations, child in tow, with boxes of cookies for the strikers. She explained that she didn’t want to see “American-style” overcrowding in her son’s classrooms, and said that “they [the teachers] are going to have to fight eventually, might as well do it now.”