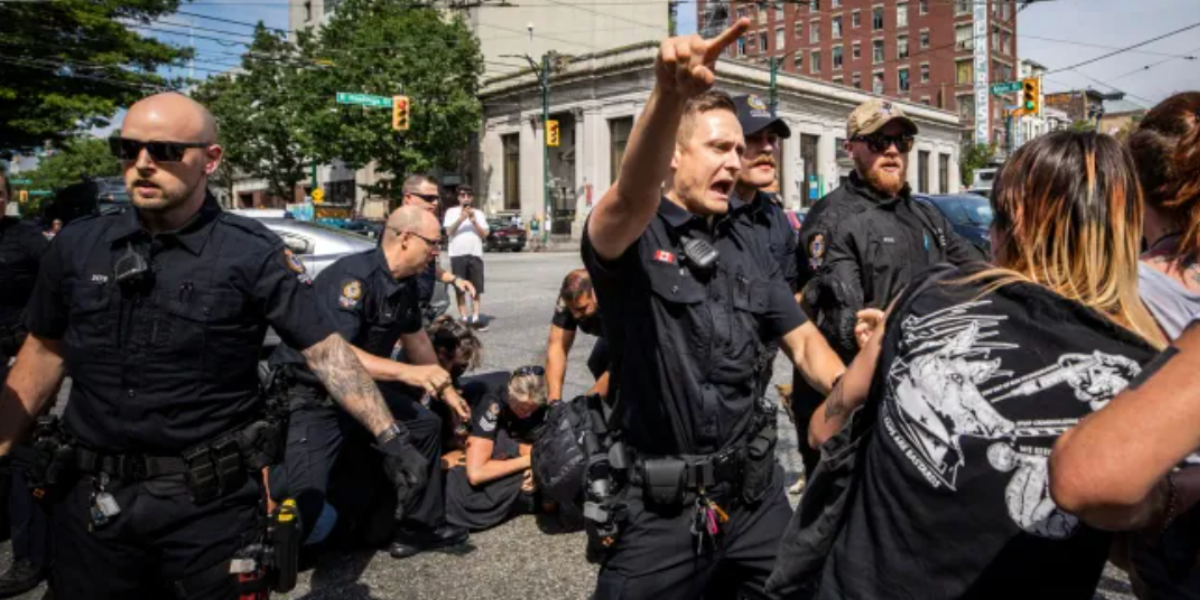 Capitalism is founded on, and rooted in, violence. Whether the violence of enclosure and privatization of commons, or the violence of an imposed labor market that commands, “Produce value for capital or die.” These aspects of capitalist violence often become concentrated in violence against unhoused people, because they occupy commons (public or community space), and they represent life not in the service of producing value for capital.

The violence inflicted on unhoused people is most visibly shown in policing and criminalization. It has also taken the form of civilian vigilantes either protecting their own property (or property as a concept) or acting out capital’s internalized ideology of productivity.

Over the last few years this vigilante violence has erupted in numerous cities in British Columbia. In some cases it has been organized. In at least one case it has been openly fascist. At the same time this violence has moved alongside the everyday violence of policing in poor communities like Vancouver’s Downtown Eastside (DTES).

On July 25, 2022, two unhoused men, Paul David Wynn (60) and Steven Furness (43), were killed in a shooting spree of four people by 28-year-old Surrey resident, Jordan Daniel Goggin. Mr. Wynn was shot and killed outside the Creek Stone Place supportive housing complex on 201 Street around 3 AM. Mr. Furness was killed near the Langley City bus loop at Logan Avenue and Glover Road. The shooting allegedly occurred over a period of as much as six hours.

The same week as the Langley shootings a man poured flammable liquid on a woman who was sitting on the sidewalk in the DTES and set her on fire. Around that time a man’s sleeping structure was also set on fire in the area.

Only weeks later and following an attempted police decampment of unhoused people in the DTES that ended in seven arrests, events took a particularly ominous turn. Someone distributed leaflets in the Downtown Eastside threatening arson against people who did not remove their tents. The anonymous flyer began: “Tents & belongings on the side walks (sic) will be burned with gasoline and propane canisters” before warning, “You have 7 days to comply.”

The flyer reproduced the banishment logic of city-directed street sweeps ordering unhoused people to go away.  “Residents that live in the area will not you to destroy our community any longer with your selfish, (sic). This is a serious warning to the homeless in the area. Leave now or suffer the consequences of your selfish addiction.”

The mobilization of vigilante violence and threats of aggression against unhoused people are not a recent occurrence. In 2005 armed forces reservists infamously killed Paul Croutch in Moss Park. Though people in BC might be excused for feeling as if things have intensified given events of the last few years.

Anita Place tent city in Maple Ridge long served as a self-determined site of housing, mutual aid, health care, and emergency response, by and for unhoused people, in a context of multiple crises (housing, health care, overdose, social violence) over the last years of the 2010s. As a space of solidarity among homeless people it was also subjected to multiple forms of attack from economic and political leaders, as well as more privileged residents of Maple Ridge.

Poor-bashing against Anita Place got direction from official channels. At one point, the mayor of Maple Ridge, Mike Morden, released a 34-minute video produced by a public relations firm in which, in a fake interview format he accused homeless people of “raping and pillaging all of our community and our businesses.” Morden had already turned Anita Place into something of a prison camp with constant surveillance and harassment, along with regular acts of invasive violence by police and bylaw enforcement officers.

At the same time, the official violence was buttressed by the aggressive actions of anti-homeless vigilantes, who came to be known as Ridgelantes, in Maple Ridge. On April 14, 2019, anti-homeless NIMBY advocates and Ridgelantes, stoked by their mayor’s offensive and outrageous claims, held a rally against poor and unhoused people living in the city.

A Homes Not Hate counter-rally in support of unhoused people blocking the intersection at Lougheed Highway and 223 Street in downtown Maple Ridge was met with an aggressive response from angry motorists. One driver attempted to drive through a line of protesters. There were also numerous people in vehicles shouting bigoted poor-bashing slurs at people and giving unhoused people the finger.

During the speeches, a violently angry woman exited a high-end SUV and ran across the street to physically confront and verbally berate several people in the rally. Not only did she spew typical poor bashing vitriol (“Get a job,” “Pay taxes,” etc.) but at a few points she struck people, including punching a woman, a VANDU member, in the face.

The mobilization of Ridgelantes worked in the end. On September 13, 2019, Anita Place was fully torn down.

Twice in the space of weeks in August of 2018 the white supremacist Soldiers of Odin (SOO) threatened to assault homeless people and take down Discontent City, the shared living encampment in Nanaimo. A march of SOO the first weekend in August was opposed by a collective gathering of unhoused people and allies, successfully turning SOO away. A week later the SOO made a threat to forcibly tear down the tent city. A mass turnout of people showed up to oppose them, and news of the anti-fascist mobilization kept the fascists away.

The fascist threats rested on a broader layer of anger toward unhoused people coming from residents who would have viewed themselves as more respectable. A core of poor-bashing opponents of the tent city regularly showed up in larger numbers to hurl epithets at unhoused people and to express support for the SOO mobilizations. As elsewhere, this was encouraged by mainstream political institutions that opposed the tent city and used poor-bashing language and policy approaches against tent city residents and supporters. Notably, the leader of SOO on Vancouver Island felt comfortable enough to run for city council in municipal elections that year.

Vigilante violence against unhoused people is absolutely horrifying, but we must remember that vigilante violence often mirrors the violence of the state. We have seen this in incidents of assaults on people in Vancouver’s Downtown Eastside that have been captured on video in recent years.

In Vancouver, another wave of official violence came on August 9, as people were still reeling from the attacks in Langley and the fire assaults in the DTES. More than 50 Vancouver police officers, deployed in a street sweeps decampment of unhoused people violently turned on people at Hastings and Main. Our Streets, a community-based initiative doing care work on the street, released a statement describing some of the violence:

“VPD constables were pushing and shoving bystanders, pulling people from the crowd and deployed pepper spray. Supporters who were walking by and not involved in the initial incident were violently grabbed by police and thrown to the ground, with one person having their head slammed on the pavement.”

Then, on August 22 Vancouver police officers killed Chris Amyotte, an Ojibwa man who was in distress in the DTES. VANDU reports that he had been bear sprayed and had stripped down and was screaming for help after. Witnesses say Mr. Amyotte entered a convenience store and was pouring milk on himself to treat the bear mace when police arrived, shot him multiple times with a beanbag gun and took him into custody. At some point in the police action he went into medical distress and died on the street. Witnesses say people made police aware of the situation and what he was dealing with, to no avail. Mr. Amyotte was not unhoused, but his killing further traumatized people on the streets who witnessed it and tried to intervene to save his life. Vancouver police have killed at least three people, two in the Downtown Eastside, so far this year.

It is not surprising that vigilante violence against unhoused people has found form in explicitly fascist mobilizations. This is in keeping with their capitalist and producerist vision, a far-Right approach to class issues that divides the working class between supposedly productive “producers” (in a way they further construct as white workers) and those they view as unproductive or as “social parasites”. For fascists, the supposedly productive sectors of the working class are pinched by the “unproductive” who allegedly live off of their labor (without distinguishing exploiters who steal surplus value and less fortunate workers who have not sold their labor power).

The vigilante violence in BC’s Lower Mainland has come in the midst of fear politics campaigns leveled against unhoused people mobilizing producerist logics, which inevitably benefit landowners, businesses, and the state. Coming from high profile local media figures, city councillors and online tourism sites, the poor-bashing has used a language of street cleaning and zombies, a framing of unhoused people as waste, as barriers to productivity.

Ironically, one of the outcomes of third party vigilante threats is the increased mobilization of police violence as cops claim to be acting on behalf of community safety. People in the community know that this is an invitation for more (official) violence against them. They know that they keep each other safe. As I have outlined previously, cops in Canada have histories of killing unhoused people.

Threats and violence against unhoused people serve to reinforce property relations and labor markets, which inevitably harm all working-class people. They also serve purposes of further enclosure—establishing community or public spaces as sites of surveillance, policing, and social control.

Real community safety comes from the care people provide each other. Groups like VANDU and the Our Streets coalition and others have organized against the violence. As VANDU’s Vince Tao put it, the biggest concern in the area remains the police and city workers trying to decamp the neighbourhood. In his words: “People are concerned of course, but they’re also concerned about the decampment too. Ongoing violence by police and city workers is the primary concern for people.” At the same time allies need to confront the violent rhetoric of those stoking vigilante outrage through poor-bashing fear politics.