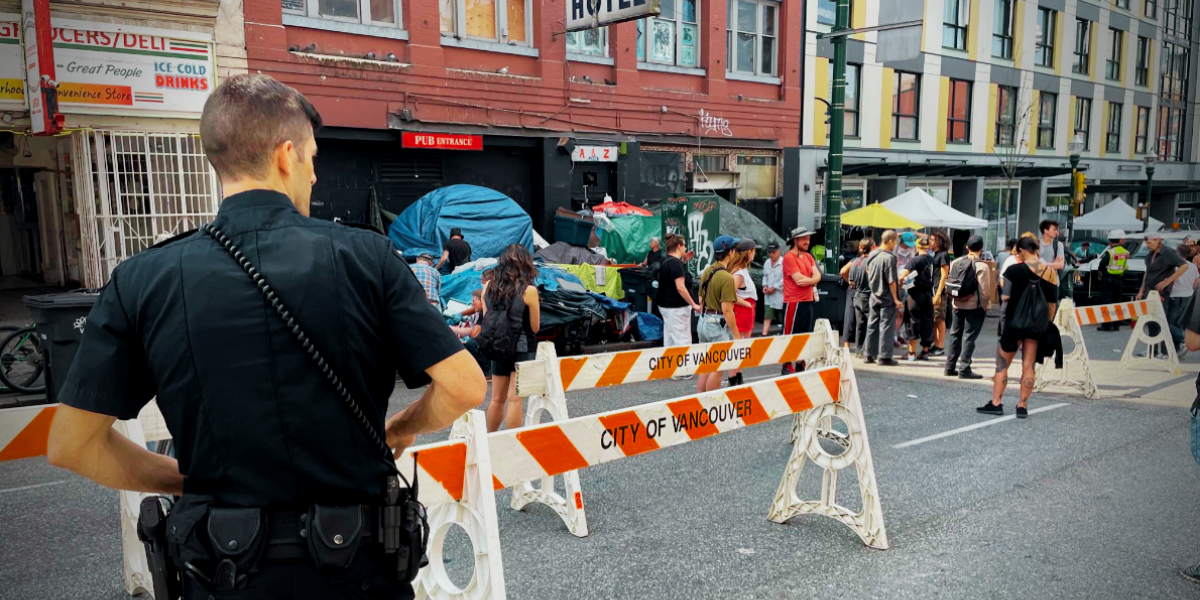 “White saviourism turns people into projects; trauma and personal stories into fundraising campaigns; communities and marginalized groups into lucrative ‘causes.’ Justice sees people in the fullness of their humanity, and fights to uphold their inherent dignity and worth at all costs.”

Olivia Alaso’s words start this article because when it comes to how we behave towards people living outside, pity and stigmatization, if not outright violence, is very common and normalized. Instead of coming from a place of handouts or guilt, we need to see all of us as self-determinate and deserving, no matter our condition and circumstances, in order to work together and win a world with housing for all.

This article describes our current housing situation in so-called Canada, gives a brief description of what happened yesterday, and looks at how we can work together with our neighbours to end policing and the commodification of housing for everyone.

What happened on August 9?

On Tuesday August 9 at 10:00AM at the Downtown Eastside of so-called vancouver, East Hastings residents had to deal with an onslaught of police and city workers who demanded a “decampment.” This comes after over a week of City Engineering Services not collecting garbage along Hastings, and three days after a Fire Order by Fire Chief Karen Fry.

Not only is Karen Fry’s order on the coattails of a manufactured health and safety hazard from stopping garbage collection, but it also has no factual evidence to back it up. Though fire safety is important—especially with fire frequency and severity increasing—there is no evidence that evictions will help. Many deaths from tent fires occur when people are sheltering alone and no community is there to respond. Using fire safety as a cover to displace people does not increase overall safety for residents currently forced to live outdoors in this ongoing housing and climate crisis.

This Fire Order also violates International and Canadian Human Rights standards as set out in The National Protocol for Homeless Encampments in canada and the “Memorandum of Understanding on Support for Unsheltered vancouver Residents signed by the Parks Board, city, and province.

Nevertheless, with an excuse of a fire order, and with blatant admittance by city workers that they have absolutely no alternative housing options available, over 50 police told residents they have to pack up all their homes and belongings, and leave.

Though no housing was provided, the city did set out garbage bags and city garbage bins—yes, the ones you use to take out the trash—as storage for residents. In this act of dehumanization by the city, and in this term of “street sweeping,” the daily practice of police and city workers moving throughout the Downtown Eastside seizing possessions, in order to ‘clean’ “city property,” confirms that unhoused residents aren’t even seen as human in the eyes of the state.

This is, however, another eviction of many to come. The police and city workers were tasked with evictions at 10 different locations on Hastings. I overheard one city engineer saying, “They don’t care if it takes all day—all week. We will be here getting this done.”

Property for profit and cops for corporations

The way unhoused residents are criminalized, stigmatized, and dehumanized is no accident in the same way that the ongoing global food, shelter, wage, and climate crisis are not accidental.

In a statement, vancouver mayor Kennedy Stewart said, “Despite these investments and effort, it is clear that demand for high quality, supportive housing still outstrips supply.” But just what supply and demand is he talking about?

Regarding available empty homes, there are no issues whatsoever. There are over 23,000 vacant residences in vancouver. With about 2,400 people currently unhoused, this means there are ten vacancies for every one unhoused person.

Having more empty houses than houseless people isn’t unique to Vancouver, but a widespread ‘necessary evil’ for racial capitalism to keep (not) working. In toronto, there are about 65,000 empty condo units and around 8,700 unhoused people, meaning there are over seven condo units available for every one person currently unhoused. Similarly in edmonton, 3,000 people are living on the streets in a city with 40,930 vacant homes which means there are also seven homes for every person currently unhoused. These numbers are commonplace in so-called canada and the crisis is increasing across much of the world.

Of course, these homes have been bought out and hoarded for the purpose of wealth, instead of redistributed to the public as the basic human need that they are. Instead, we are the only species on earth to pay to live here, and in so-called vancouver that means paying the third most unaffordable prices in the world.

Protecting the system of property and profit has always been the purpose of the police. Policing—only a 400-year old concept on this land after millenia of robust Indigenous community safety systems—has roots in displacing Indigenous peoples from their land, recapturing enslaved Black people trying to free themselves from their slavers, and surveilling workers of colour and poor workers when they were building the infrastructure of so-called canada that we know today.

This ongoing legacy continues with the same people being targeted—especially disabled people, houseless people, neurodivergent people, poor people, and people who use drugs. Just yesterday, someone who was behaving erratically but at no danger to anyone around them was moved by multiple police officers, violently apprehended, and carried to the back of the paddy wagon after private security at Carnegie “Community” Centre felt they were disturbing the storefront. This is while people within the community were successfully de-escalating this situation. But as policing systems do best, the cops escalated the matter and resorted to violence, a reality prevalent both outside and within the institution of policing, as seen in the misconduct rampant at police trainings (please be advised of the content warning for this article, which includes further details of police violence).

Police and prisons have always been here to put profit and property over people, and until housing is de-commodified and communities get back the resources stolen by policing and capitalist systems, the pattern will continue and intensify.

Housing and health beyond capitalism

This intensification is promised in the math of capitalism. The system itself relies on an ever-constant increase of wealth in the hands of the 1% directly from our wages. This is seen blatantly in the statistics collected during the past two years of the pandemic, showing billionaires of the world increased their wealth by 3.9 trillion USD, while the average person’s income dropped by an almost identical amount (3.7 trillion USD).

What is manufacturing this lack of housing is the same force that is driving record profits for the ultra rich during Covid-19 while the rest of us deal with the consequences of the climate crisis, food insecurity, further manifestations of racism, gendered violence, and war all while swallowing the biggest wage stagnation in three decades. The media wants us to blame other states like Russia or China, or marginalized communities like migrants, Indigenous people, unhoused people, disabled people–all while diverting our attention from the socioeconomic system itself.

Robyn Maynard writes in Rehearsals for Living, “This catastrophe was not born from ‘mankind,’ but from the slave plantation, the settler town, the prison, the reservation. It is unsurprising, then, that the solutions being forwarded by those in power are more of the same–the border wall, the immigration detention centre, the refugee camp, the open-pit mine. For us to live in anything that I hope we can one day call freedom, it is necessary to put a swift end to the death-drive-disguised-as-worldview—the murderous epistime that is being imposed on us by the master/settler/CEO.”

In Leanne Betasamosake Simpon and Robyn Maynard’s letter exchange published this past spring, they speak of making freedom in the forgotten places of society. Maynard says, “People pressed to the edges of state and public abandonment consistently show the most courage and take the largest personal risks.”

Leanne responds, “Our truths, layered, nuanced, and rooted in different historic and contemporary realities, can be an asset when our relationship building, movement building, and community building is intentional, attentive and committed to not replicating the logics of capitalism, colonialism, and slavery.

Theory generated from land, from practice, from experience, from collective minds and bodies coming together in formation and achieving something synergistic that, as individuals, we couldn’t have achieved otherwise. Theory generated from action propelled by the social conditions and material needs of our peoples. Tent cities and encampment communities as shared homeplaces are the microcosms of mutual and treaty relations between Black and Indigenous peoples. Tent cities and encampments build a practical alternative to live in while generating shared Black and Indigenous meaning and theory that could not have been generated otherwise.”

The reason Black, Indigenous, women of colour, migrant people, disabled people, unhoused people, and all working class people of the world pose such a threat to the corporations that police work for is because we show an option outside of the current way of living: one that relies on each other instead of on racial capitalist and colonial systems—one of grassroots organizing, collective care, and shared responsibility.

When we share resources and build tenant power with our neighbours, organize unions in our workplaces, listen to the radical traditions of Black feminists, respect the laws of Indigenous peoples globally, and work on our own internalized racial capitalism and colonialism, we are directly taking back the very funds and futures from the people and systems who are causing our neighbours to be houseless and allowing policing to continue, and we are seeing our relationship with people living outside as one of coresistence rather than charity.