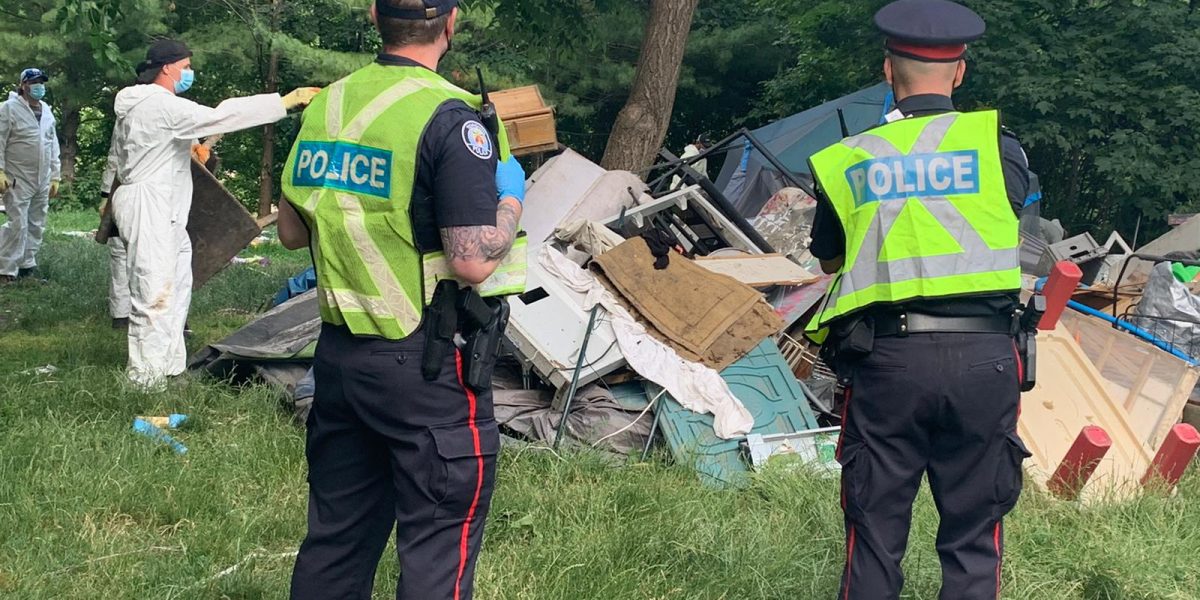 Police are state instruments of class violence, and are indispensable to the maintenance of capitalism. There are few ways in which that violence is deployed more forcefully, viciously, and regularly than against unemployed and unhoused people. This is not surprising given that the function of policing is to protect property, maintain property relations and to secure labor markets for exploitation.

Violence against unhoused people has been on full display in the police assaults on encampments of unhoused people in virtually every city in Canada, in street sweeps where cities steal people’s belongings, and in poor bashing laws like so-called “safe streets” acts that criminalize survival labors and economies (panhandling, squeegeeing, street markets, sex work, etc.).

Far from promoting safety, these police actions all put people’s lives at risk. The Canadian police have an awful history of deploying lethal force against our unhoused neighbors, and have killed numerous people over the last few years. And these killings show the same colonial and racialized character as policing itself.

Agnes Sutherland, a 62-year-old Fort Albany First Nation woman, was arrested in her wheelchair at a shelter in Timmins on February 3, 2018 after leaving the local hospital. Sutherland was a mother of six, with six great grandchildren. Her son, Glen Sutherland, told the Timmins Daily Press that she was a survivor of the notorious St. Anne’s residential school, and that her frequent trips to the emergency room were a cry for help. But after she was taken to the police station and put in a cell, she had to be taken back to hospital where she was pronounced dead the next day.

A statement issued by local Indigenous leaders—including Grand Chief Alvin Fiddler of the Nishnawbe Aski Nation, Grand Chief Jonathan Solomon of the Mushkegowuk Council, and Fort Albany First Nation Chief Andrew Solomon—raised serious questions about the death: “It is alleged that when police attended at the scene of the local shelter, Ms. Sutherland was treated roughly while being taken into police custody. She suffered severe complications during her detention.” This is not an isolated incident.

On the afternoon of January 2, 2021, a man died while being transported to a shelter by Ottawa Police Service (OPS) officers. According to the Special Investigations Unit (SIU), OPS went to the Lord Elgin Hotel at around 12:15 PM on report of an intoxicated man in front of the hotel. They decided to transport the man to the Shepherds of Good Hope shelter and upon arrival the officers noticed that the man had become unresponsive. Emergency Medical Services were called, and the man was placed in an ambulance where he was pronounced dead at 1:17 PM.

Each year many people are taken into police custody for intoxication or the assumption of intoxication, and every year several die in police custody—or even before being arrested. The same weekend that Sutherland died, Timmins police also shot and killed Joey Knapaysweet, a 21-year old Indigenous man outside a hospital. Police should not be called for intoxication and people should not be detained or subjected to violence for it. The same applies to people experiencing homelessness.

Lethal force in response to mental health and homelessness

The Montreal Police Service (Service de police de la Ville de Montréal, SPVM) have a particularly brutal record of killing unhoused people. Among the most notorious was the killing of Jimmy Cloutier.

Montreal police officers shot and killed Jimmy Cloutier, a 38-year-old unhoused man, outside the city’s Old Brewery Mission on January 6, 2017. The Old Brewery Mission reported that Cloutier was a long-time client who had attended the shelter especially for meals and changes of clothing. Shelter director Matthew Pearce said that Cloutier had participated in a program at Maison Claude-Laramée for homeless people with mental health issues, a program run jointly by the shelter and the Douglas Mental Health University Institute. Cloutier had not attended the shelter for four years after completing the program. Pearce reported that over the past year, Cloutier had been a “fairly frequent visitor” and seemed fine the day of the shooting, stopping by the cafeteria to get coffee.

Surveillance camera video from the police killing of Cloutier shows the victim tossing a cup of liquid on the ground before, and then picking up a bag and walking out of the view of the camera. Several police holding firearms then pursued him, shooting and killing him only seconds later. Police claimed he was armed and made some “aggressive gesture” at them, but this was not independently confirmed. Indeed, other unhoused people on the scene were upset that the police had used lethal force against Cloutier and deployed it so quickly. They asked why no alternatives were attempted first, and police refused to answer. According to Milosz Janda, the Old Brewery Mission social counsellor: “They just want to find out what was the reason for such behaviour? Why was it done that way? Why weren’t other possible approaches there?”

Cloutier is the fourth unhoused person known to have been killed by Montreal police officers in the past few years. In 2011 police pepper sprayed and shot Mario Hamel, an unhoused man with mental health issues. Police had been called with reports of a man throwing garbage bags. While police came with violence against someone who was a stranger to them, people who lived and worked in the neighborhood knew Hamel and described him as “a fixture in the neighborhood.” They knew that he collected cans as his main source of income, so of course he was moving garbage bags around. For someone on the streets this is survival, but for police it is reason to kill. Police fired so wildly in their assault on Hamel that they also killed a bystander, Patrick Limoges, a nurse who was on his way to work.

In 2012, police shot and killed Farshad Mohammadi, a Kurdish refugee from Iran, in a metro station. Police had been called because the victim had appeared to be acting aggressively. Yet, witnesses said that Mohammadi was not bothering anyone, and was running away from police when they fired on him.

Then, in 2014, Alain Magloire, a 41-year-old Black man who had been a biochemist and researcher and was the son of former Haitian justice Minister René Magloire, was run into by a police car and shot four times. Magloire, who suffered from what were described as “serious mental health issues,” had been smashing windows with a hammer near a hostel on Berri Street. He had also been well known at the Old Brewery Mission. Police investigated police in this killing and the Sûreté du Québec decided that knocking Magloire down with a vehicle and then shooting him four times was not excessive force.

Old Brewery Mission director Matthew Pearce spoke to the awful history of police engagement with people experiencing poverty and homelessness in Montreal. According to Pearce: “Four incidents of confrontation with the police, and four deaths. Not injuries – deaths. I have to feel that in each of those there were other options that could have been pursued.” But regularly inflicting violence against unhoused people is part of the job of police to protect property and “public order”, and they know they will get away with it

No more failed and futile reforms: defund and dismantle police

Family members have highlighted the failings of the inquests and the continued police violence against unhoused people. Pierre Magloire, Alain Magloire’s brother, responded to the killing of Jimmy Cloutier with exasperation: “I was, like, ‘Again? Oh my God.’ How come we are at the same place we were two, three years ago?” But media reports have immediately turned to poor bashing and criminalization of the victims. When Jimmy Cloutier was killed, some mused that he was a drug dealer. None of this was suggested by witnesses or even members of the provincial police oversight agency, and is irrelevant to in any event because drug use is not an excuse for police violence.

These killings are extreme forms of the poor bashing that police regularly inflict on people experiencing homelessness. It extends from habitual police practices of harassment, intimidation, bullying, and violence. It reflects police perspectives that view homeless people as “problems” or unworthy victims, or detritus.

This is another context in which community or neighborhood care teams, peer-led and entirely separate and independent from police, would be better alternatives. As in cases of mental crisis, police should not be a response to unhoused people and their activities. And there are ample resources to fund such community alternatives: defund and dismantle police and move community resources and funding to community care.